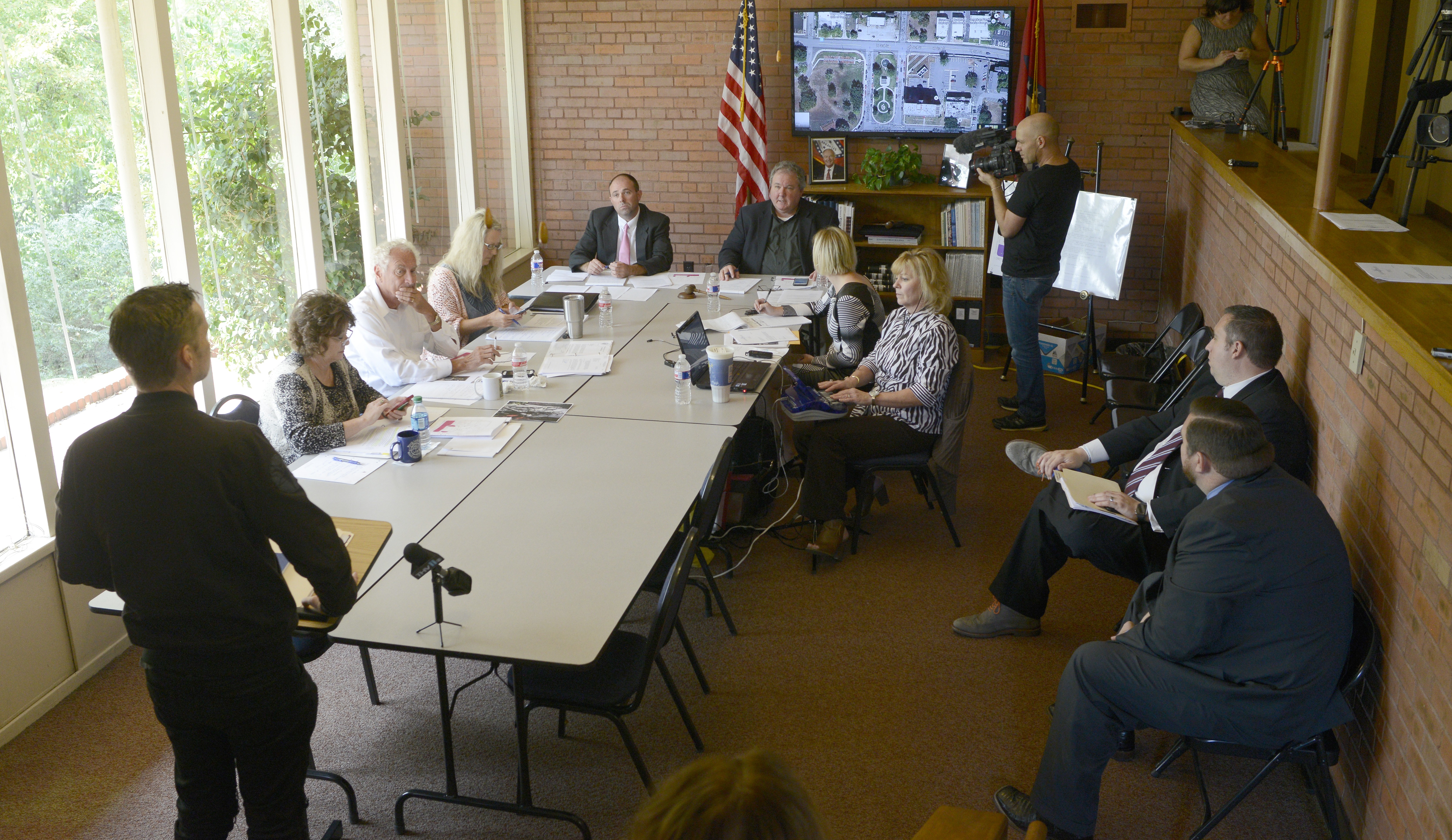 A meeting of a subcommittee of the Arkansas State Capitol Arts and Grounds Commission was held today, with the three-member group asking questions about materials and construction of the 10 Commandments Monument and the Baphomet statue proposed by The Satanic Temple. A proposed site was selected for the 10 Commandments Monument. An official with the Satanic Temple, after being told its monument couldn’t be placed directly beside the 10 Commandments monument as it had requested in their proposal, will be allowed to select its preferred site at a later date. The subcommittee then punted further discussion of the Satanic monument until late January 2017.

In September, the Arts and Grounds Commission had assigned the 10 Commandments Monument and the Baphomet statue to a three-member committee consisting of Melonaie Gullnick, Kelly Van Hook and architect Tony Leraris. Two other monuments, by the Saline Atheist and Skeptic Society and the Gold Star Families, will be considered by another three member committee.

Chief Deputy Secretary of State Kelly Boyd said that the goal of the subcommittee was to review the monument proposals to determine if they were “shovel ready,” with all engineering, financial and materials concerns accounted for.

Fayetteville attorney Travis Story appeared for the American History and Heritage Foundation, Inc., which has proposed the 10 Commandments monument. He told the commissioners that the 6,000 pound red granite tablet is intended to “preserve what led to this great nation,” and will be an exact replica of a monument in Texas. He said Nabholz Construction will provide labor and materials to construct the pad for the monument to stand on, and that the monument will not be lit at night, so no power cables will have to be run to the site. Story told commissioners that the group hopes to erect the monument somewhere between the Arkansas State Capitol and the Arkansas State Supreme Court building to symbolically show the bridge between the 10 Commandments and the rule of law.

Story seemed confused as to the details of his own proposal at times, first telling the subcommittee that the monument would rise directly from the ground with no base before committee member Melonaie Gullnick pointed out that the proposal submitted to the Secretary of State’s Office includes provisions for a 56-inch by 14-inch base of the same maroon granite as the monument.

After some discussion, the subcommittee selected a site designated as H on plans of the Capitol grounds. The site is at the rear of the Capitol building, southeast of the Arkansas Fallen Firefighters Memorial, between the Capitol and the Supreme Court building (marked as a yellow star in the satellite photo below). 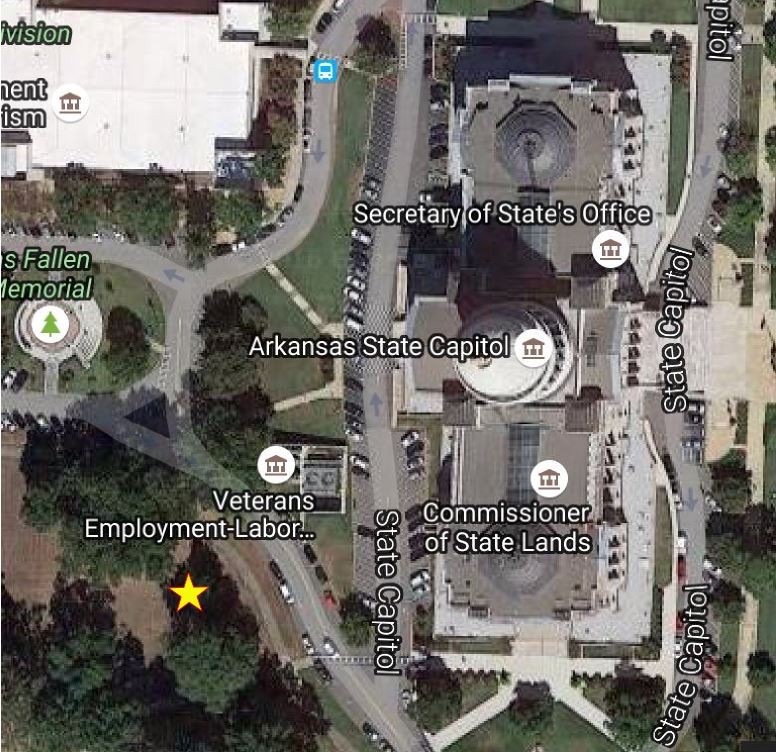 A follow up hearing to continue review of the 10 Commandments monument proposal was scheduled for Nov. 16 at 11 a.m.  Boyd cautioned the audience that the selection of the site did not mean the memorial had been approved for inclusion on the Capitol grounds.

At one point during the meeting, architect Leraris spoke up to say that while it might get him thrown off the subcommittee, he was raised Catholic and believes the idea of a Satanic-themed monument “speaks to evilness.” He and the other members of the committee asked Greaves to explain the symbolism behind the proposed statue.

Greaves said the 8-and-a-half foot, 1.5 ton bronze figure proposed by the Satanic Temple would be a symbol of the rule of secular law, would represent religious pluralism and government neutrality, and would memorialize people who have died in religious witch hunts and moral panics. He said the statue has been proposed because his group wants to avoid the appearance that any one religious viewpoint is preferred or championed by government. “We’re speaking for the marginalized,” he said. He said that if the 10 Commandments monument is withdrawn, the Satanic Temple’s monument proposal will be withdrawn too, given that his group would never try crossing the line between religion and government otherwise. 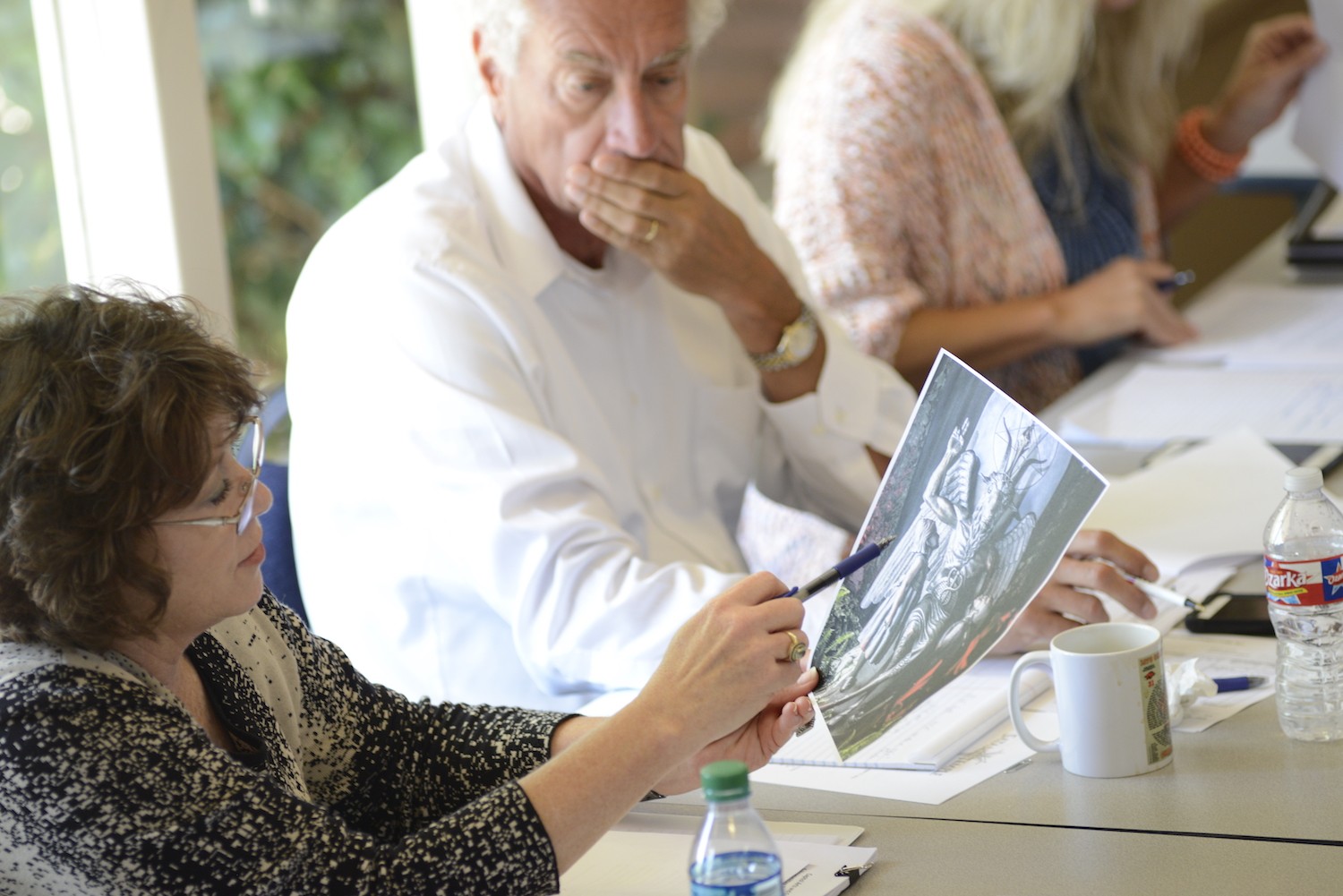 Deputy Secretary of State Boyd told Greaves that it is longstanding tradition to never allow monuments next to one another on the Capitol grounds. The Satanic Temple proposal had requested the monument be erected next to the 10 Commandments monument. Boyd then directed Greaves to a map with several potential sites, including a spot on the south side of the grounds near the Arkansas State Law Enforcement Memorial, and another on the north side near the memorial to the Little Rock Nine. Greaves said he would survey the locations while he is in Little Rock and email with his preferences.

As he had with the Story and the 10 Commandments monument, Boyd told Greaves that, if approved, his group would, by state law, have to pay a fee amounting to 10 percent of the construction and installation cost of their monument to the Secretary of State’s Office, which would be placed in a fund for the upkeep of all monuments on the Capitol grounds. Boyd also told Greaves that when he returns for the third hearing on the monument proposal, he should bring an engineering firm representative who has developed a “ground plan” for installing the proposed monument.

Asked to set a date for the third review meeting on the Satanic Temple’s monument, Leraris, Gullnick and Van Hook talked about the difficulty of scheduling around the holidays before settling on 11 a.m. on January 25, 2017, over three months away.