Ideology was not exactly front and center in the 2016 campaign. Donald Trump delivered a cult of personality that was often nearly devoid of ideological concerns.  During the GOP primary, expressions of identity and cultural grievance seemed to motivate voters more than conservative orthodoxy; by the time we got to the general election, actual policy debates took a major backseat to a scandal-of-the-week flame war  between two unpopular candidates.

If 2016 reminded us that campaigns are often more about identity than ideology, 2017 will be the reality check that political outcomes drive policy results. Trump was idiosyncratic in many ways, but his campaign promises, publicly released policy platforms, cabinet and staff appointments, and team of advisers all point clearly to an extreme right-wing agenda on taxes, Wall Street regulation, environmental regulation, and other matters. I mentioned this yesterday in relation to health care — some Trump voters may not want to see massive rollback of health care coverage, but that is precisely what the GOP Congress has explicitly stated they will do (an approach echoed by Trump’s own stated policy platform).

A national poll released this week from Quinnipiac suggests that Americans may be in disappointed with the actual policy agenda of Trump and the Republican Congress: 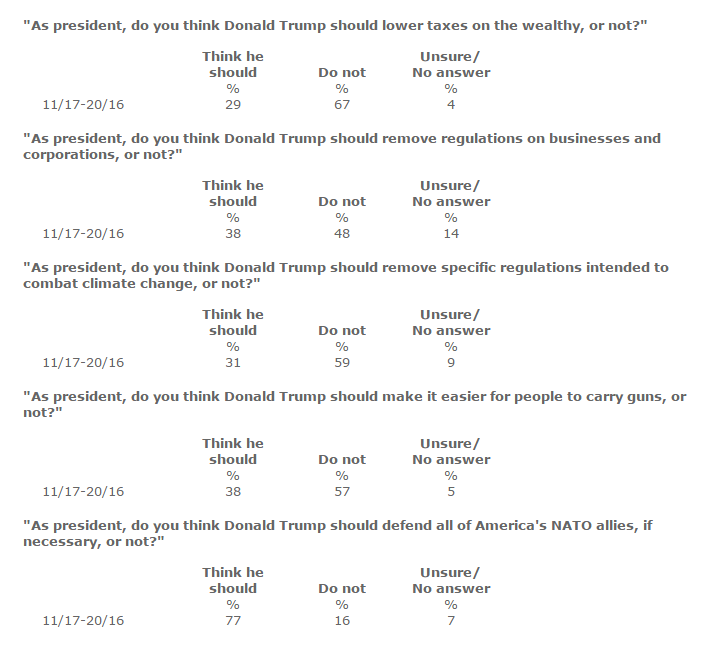 Again, Trump didn’t spend a lot of time talking about his policy agenda, but he has one! It’s about to be enacted, despite the fact that solid majorities oppose him on most key issues.

I noted above that Trump’s presentation was often non-ideological (which probably helped him get elected despite an actual agenda that was unpopular), but there was one big, honking idea that was at the front and center of his campaign: “Build a Wall!”

Quinnipiac’s poll found that 55 percent oppose building a wall along the Mexican border while 42 percent support it.

And one more: For all of his hemming and hawing and pandering on many issues, Trump was crystal clear during the campaign that he will appoint Supreme Court justices who oppose Roe v. Wade and that if he’s given the opportunity to re-shape the Court, the ruling protecting abortion rights will be overturned. The poll found that 67 percent agree with Roe v. Wade, while 30 percent disagree.

In any case, whether or not this is actually what the American people want, Trump and the Republican Congress can now proceed to enact their agenda, a sweeping right-wing remaking of public policy — potentially the most dramatic and impactful shift since the New Deal. Elections have consequences.