Supreme Court Justice Paul Danielson has issued a statement on the death of his former colleague, retired Justice Donald Corbin.

He is the only member of the court to issue a statement since Corbin’s death last night. The court, however, often issues a per curiam order to note death of colleagues on behalf of all colleagues and it could do so Thursday, the customary release date for court opinions.

UPDATE: Chief Justice Howard Brill has also issued a statement, too. It follows.

You may  recall some tardiness in the court’s belated recognition of the death of Chief Justice Jim Hannah. Several members of the court resisted issuing an order in that case. Hannah had found himself pitted against an emerging judicial claque — Justices Rhonda Wood, Jo Hart, Karen Baker and Courtney Goodson — on a variety of matters. Finally, a per curiam was issued.

Corbin, too, had split with the same justices, particularly over their connivance in withholding a majority opinion he joined in the same-sex marriage case to overturn state law. The court ultimately punted on the case. His decision to speak of some of those internal deliberations in an interview with Ernest Dumas undoubtedly did not soothe any hard feelings over that and other issues. However, Corbin was remembered in a per curiam issued on his retirement, praising his service. 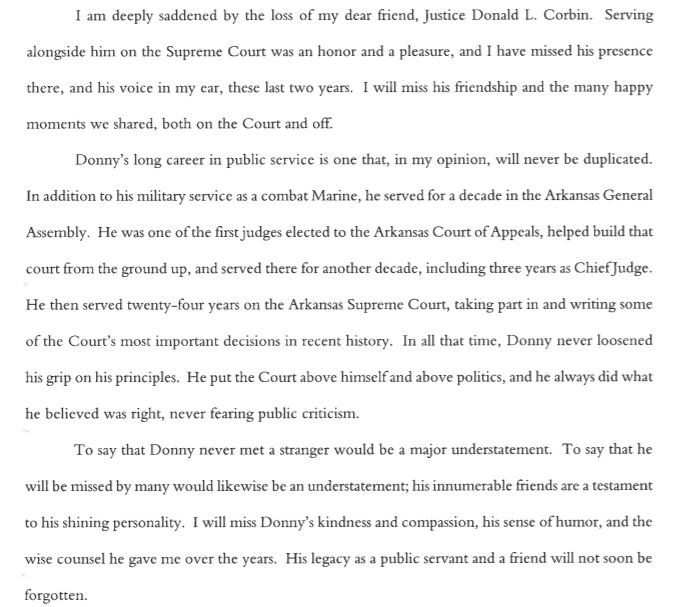