UPDATE: The House Education Committee this afternoon approved a bill to end the dual observance of a state holiday for Robert E. Lee and Martin Luther King Jr.

The approval came on a voice vote, over some objections, but nobody requested a roll call. The bill now goes to the House for final action. The governor made a rare personal appearance to endorse the bill. But his nephew and Senate floor leader, Jim Hendren, stole the show with an impassioned speech about racial understanding based on awakening during his time in the military.

Here’s what transpired before the vote:

Gov. Asa Hutchinson went before the House Education Committee today to urge adoption of his bill, already passed by the Senate, to end the state’s dual observance of an official holiday for both Confederate Gen. Robert E. Lee and the slain civil rights leader, Martin Luther King Jr.

Hutchinson said King’s singular work was deserving of a single holiday, the third day in January.

“Thank God for the civil rights movement of the 1960,” Hutchinson said. He said the march of history and unity of Arkansas merited a single observance for King. But he said Lee wouldn’t be forgotten, with a day in October on which the governor would issue a proclamation. “It would be a day of significance,” he said. “But absolutely, it’s not a holiday.”

He pleaded with the committee to send the bill to the full House, even those who might disagree. The people are owed that vote, he said.

Rep. Dan Sullivan of Jonesboro wondered whether the state could preserve the dual holiday, but support the additional educational requirement about King. Yes, said the governor, but that’s not what this bill does. He said there was an “incongruity” in honoring both men on the same day.

Rep. Stephen Meeks said the average Arkansan probably doesn’t really care about the issue. State employees just see the day in January as an extra day off while those who don’t get a holiday resent those who do. He wondered why, amid so many big topics, a governor came to committee to testify for a bill. “Why is this so important?” He continued, “Are we just trying to be politically correct?”

Hutchinson responded that the holiday wasn’t recognized for Lee until 1947 (he could have said it grew out of segregationist sentiment in the South at the time.) He said he looked at other states that had come together after divisive events. South Carolina took down its Confederate flags after the mass shooting in a black church.

Rep. Grant Hodges, a sponsor, said he believed the majority of Arkansans supported the change and that it would be good for economic development.

Hutchinson defended the economic value under questioning from Meeks. “Image is important as you recruit top talent to our state. This does have a negative view of our state when you see these holidays celebrated together.”

Rep. Jana Della Rosa said she’d heard from the NAACP, which described the bill as a compromise, that it preferred no recognition for Lee. “Was any compromise made for the Sons of the Confederacy?”  Hutchinson said he talked with many groups. He said he appreciated the “tones” of the sons and daughters of the Confederacy. They wanted a holiday. “We can’t afford another holiday,” he said. “Once you reach that conclusion, you have limited options.” So, he said, the consensus was a separation with a day of commemoration for Lee.

Della Rosa said she saw the measure as divisive and questioned polling that said a majority didn’t oppose the bill. “Not one person has asked me to do this and I’ve gotten tons of email asking me not to do this.”

Hodges said he knew some opposed the bill, but he said he didn’t see moving a day for Lee was either “divisive or disrespectful.” He noted only three states — Arkansas, Alabama and Mississippi — have joint recognitions.

Speakers have appeared before. First up was Robert Freeman of Hot Springs, who said the change was nothing more than “socialist political correctness.” It degrades “one of the truly great men of the United States.” If the holiday is to be split, Lee should get a holiday, he said. 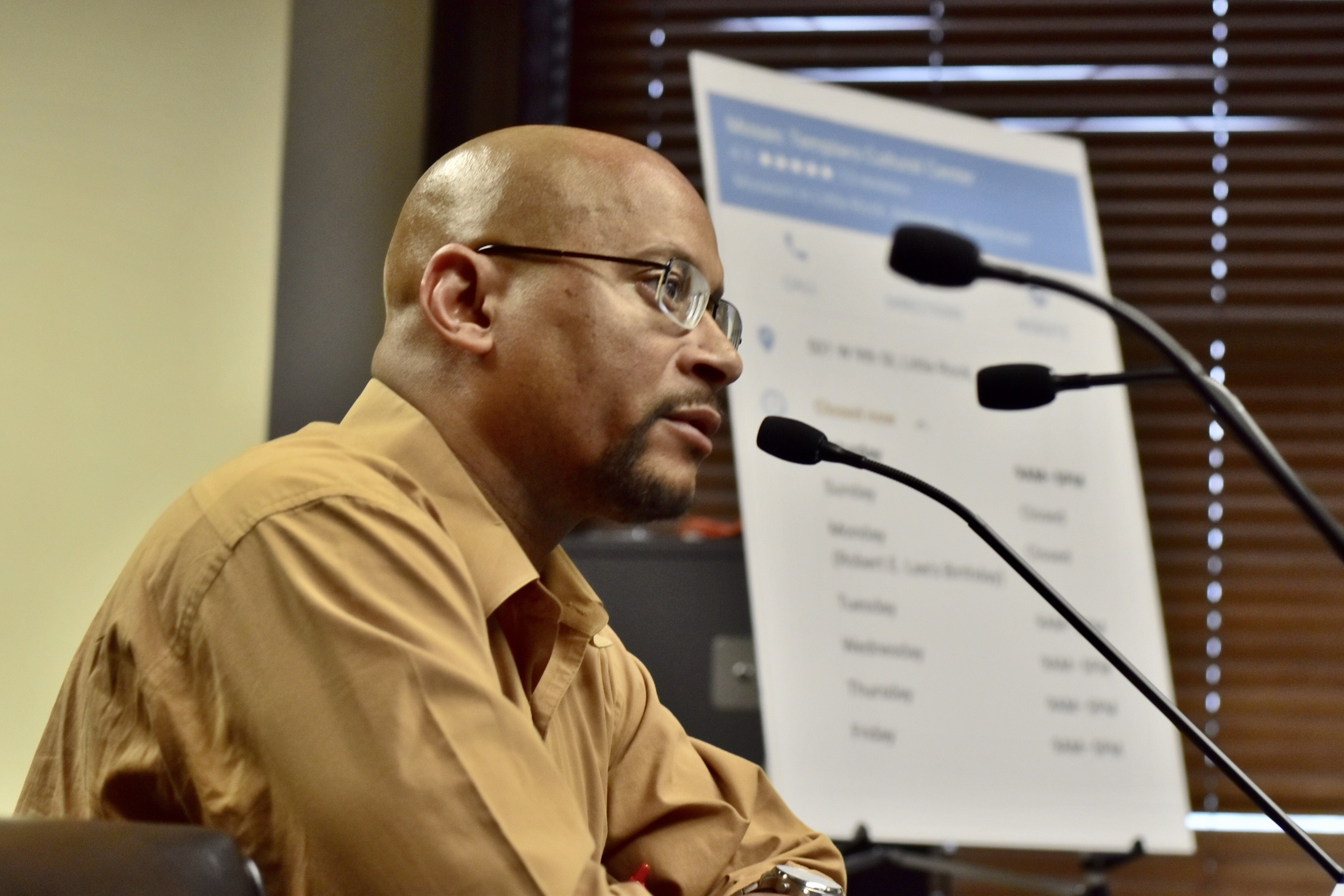 Rizelle Aaron, president of the Arkansas NAACP, said his group never met with the governor. A reference to an NAACP compromise meant only that the organization had decided not to fight the bill.

The bill is about more than Robert E. Lee, Aaron said. The dual holiday “reminds us of the things suffered by slaves at the hands of people who wanted to keep them as slaves.” The secession states, including Arkansas, made it clear in their legislative resolutions that they wanted to keep their slaves. So the holiday is a reminder of “what our forefathers suffered.” The bill is not about social and political correctness, Aaron said. “This is about understanding the emotional impact this bill has.” He related a photograph of a lynching, in which a young white child could be seen smiling.  Children today learn from observances such as the King-Lee holiday. He spoke of talking with King’s daughter in Atlanta and the pain she felt from knowing that there were still states that wanted to celebrate her father’s holiday with Robert E. Lee. “There are still people hurting every time this holiday comes about. It’s a reminder of that little boy” watching the hangings.

Sullivan asked if making a Lee observance part of the Washington Birthday holiday would be acceptable to Aaron. “Right now our focus should be on passing this bill,” he said. He said he personally didn’t have an issue with celebrating Lee on Washington’s birthday.

Meeks responded to mention of slavery by saying some 3,000 blacks in New Orleans owned slaves, according to Census data, so it wasn’t only whites. Aaron said “we have to be cautiouis about Googling history.” He said he didn’t like the reference because people like to turn around conversations about race this way. “It’s OK if white folks did it because black folks in New Orleans did it. It’s not acceptable for anybody to own anybody.” Aaron informed Meeks, too, that the NAACP represents all people and its membership includes whites, Asians and others.

Aaron said demographics and polling need to be set aside and the focus be put on “what is the right thing to do.”

Meeks said he didn’t want the issue to be about black and white, but what’s best for the state. Aaron said everything he’s heard seems to be concerned mostly with one side of the state. He said the compromise was appropriate. It does not eliminate a celebration for Lee. “I believe this should satisfy the majority of the people in the state. If we continue to celebrate both, only one side is celebrating.”

Mark Johnson, son of the late segregationist Arkansas politician Justice Jim Johnson, spoke in opposition to the bill. He related racial tension he’d experienced in high school and a principal’s urging students to meld cultures. And he spoke of the circumstances of the end of the Civil War and efforts to heal that continue 150 years later. He said he really wasn’t opposed to separation, but that he’d recommend April 9, the day Lee surrendered and committed not to continuing guerilla war, as the day of recognition for Lee. “To be fair to all, there should be equal holidays.” Lee deserves proper recognition because “he saw the big picture” and made an effort to bring the country together.

Rep. John Walker noted that honoring Lee and Washington on the same day would honor a president and a general. The president, though also a warrior, sought a different world order. Lee, said Walker, was a warrior. He may not have supported all that the South stood for, but he adopted its aims.

Other opponents included Robert Edwards of Benton, state commander of the Sons of Confederate Veterans. He said the bill eliminated a holiday for Lee. He said the governor hadn’t responded to his organization’s ideas. He said the government had sent him a proclamation on the anniversary of Lee’s death. He said it “offended” him. He said his group would have accepted the Virginia solution — a Friday holiday for Lee or a Monday holiday for King, depending on an employee’s choice. He said cultural sensitivity was needed, but said it needed to be a two-way street. He said he had ill feeling about the war, too, but tried not to dwell on it. He said ancestors had lost land in the war. “Separate is not equal,” he closed.

Sen. Jim Hendren, Gov. Asa Hutchinson’s nephew and his floor leader, spoke, too, but he said he only spoke as an individual who grew up in all-white circumstances until he joined the military and learned how much he didn’t know. He said the bill would help the state do a better job of educating about the good and bad, “instead of just what’s convenient to us.”

He said his military taught people to respect each other, as King said, not by color of skin but content of character.

“The fact that these holidays are joined may not be offensive to you. But the fact is that you should know that it is offensive to some of your colleagues and some of your friends. And I think we have an obligation to put them first.”

He said nitpicking details was an attempt to kill the bill. He talked of speaking with Sen. Joyce Elliott, a black senator, about the movie “Hidden Figures” and how she’d experienced things the unsung black women scientists had experienced. “I haven’t looked at the world the way she has, because I haven’t experienced that.”

The final witness was former state Rep. Loy Mauch, long a Confederate defender and critic of Abraham Lincoln. He was waving a Rebel flag at the recent Donald Trump rally in Hot Springs. He said both King and Lee deserved recognition. He also said he wanted to make the point that blacks served in the Confederate army. He said Arkansas could be a catalyst for recognition of “history as  whole.”

Grant Hodges closed. Keeping the two holidays on the same day won’t resolve division in the state, he said. He noted a lack of consensus on an alternative, but thought the sponsors had come up with the best available. He emphasized the importance of the bill to the governor. “Give each of these men their final resting place in Arkansas.”