On Easter Sunday, the governor’s spokesman, J.R. Davis, took to Twitter to say that he was “sorely disappointed” by Prejean’s commentary and said she was “misrepresenting others and the reality of the situation.” It’s hard to get this across on Twitter,  but it’s worth actually reading Prejean’s work (or hearing her speak — an experience that still sticks with me more than 15 years later). I don’t know whether Davis has or not. In fact, the moral force of her thought on this topic — its complexity, its depth, its thorough engagement — stands out precisely for the unblinking courage of her gaze on the “reality of the situation.”

“Every human being is made in the image and likeness of God, death row prisoners included,” Prejean tweeted over the weekend. “The death penalty is antithetical to everything Jesus stood for and is a gross violation of the sanctity of life.” Prejean also responded to Davis: 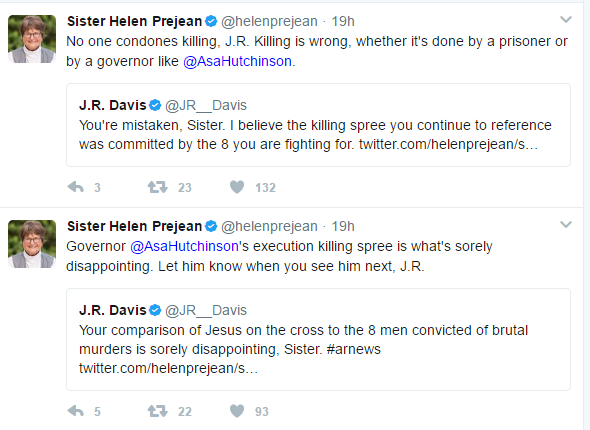 Gov. Hutchinson has the power to stop the executions. I know this is a difficult situation for him. I hope he reconsiders his position. https://t.co/ebJQGBIeR6

Prejean has continued to use social media to make her moral case and call out Arkansas politicians for their complicity in state-sanctioned killing. Someone tweeted that if St. John the Baptist lived in today’s world, he’d be trolling the powerful, too.

Why do we kill people to show that killing people is wrong? @AsaHutchinson @AGRutledge

We remember the victims of violence, but not with more killing! Stop the #ARKillingSpree #ARexecutions.