The Arkansas Supreme Court has barred Pulaski County Circuit Judge Wendell Griffen from hearing any cases involving the death penalty or the state’s execution protocol. The Court said it would reassign cases currently before Griffen.

The per curiam order cites the preamble of the Arkansas Code of Judicial Conduct:

“Judges should maintain the dignity of judicial office at all times, and avoid both impropriety and the appearance of impropriety in their professional and personal lives. They should aspire at all times to conduct that ensures the greatest possible public confidence in their independence, impartiality, integrity, and confidence.”

The Court referred Griffen to the Judicial Discipline and Disability Commission (JDDC) to consider whether he violated the Code of Judicial Conduct.

Griffen had granted a temporary restraining order against the Arkansas Department of Correction from using vecuronium bromide as a part of its three-drug execution protocol in response to a lawsuit filed by the drug’s supplier, McKesson Medical-Surgical. McKesson later asked Griffen to dismiss its lawsuit against the ADC and lift the temporary restraining order in light of the federal preliminary injunction stopping executions. So, as this relates to the question of whether the state will be able to execute seven men this week, this move by the Court isn’t that meaningful. As long as the federal court injunction, now on appeal in federal appeals court, stays in place, this lawsuit is moot.

Griffen went to protest outside the Governor’s Mansion on Friday shortly after granting the temporary restraining order, prompting an outpouring of criticism. 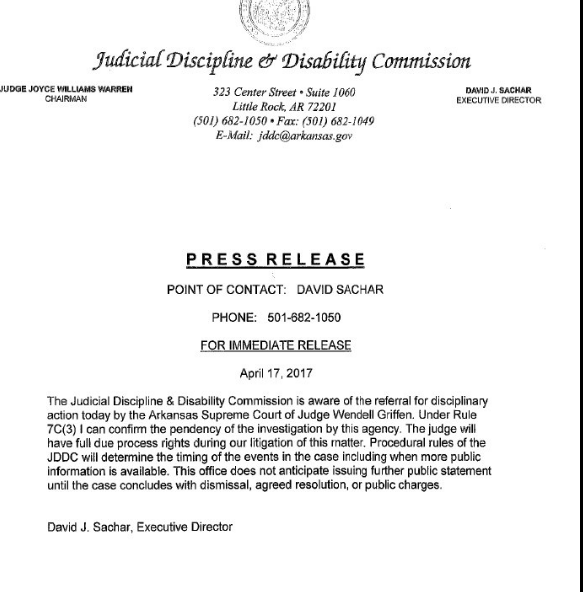