Sen. Linda Chesterfield, a Little Rock Democrat, reported being paid as a “diversity outreach consultant” in both 2016 and 2017 by Preferred Family Healthcare of Springfield, Mo., an organization she had helped receive state money on top of millions it receives through the state-run Medicaid program.

I asked Chesterfield several questions about her ties to PFH. Her response e-mail last night:

I worked for PFH for 6 months in 2016. I did an honest days work for an honest day’s pay, and no one has questioned me about this matter but you.

Chesterfield’s statement of financial interest filing for 2016, was filed in January 2017.

Chesterfield’s amended filing for 2017, filed Jan. 25, 2018, omits mention of the PFH payment. This perhaps squares her account in the brief statement to me that she received payment in only one year. She has not responded to a follow-up question.

I used the info from 2016 and realized I made a mistake in 2017. My employment ended in November or December of 2016. That is why I amended my report.

PFH has been in the news because a former executive of the company, Rusty Cranford, now faces indictment for embezzling money from the organization through payments to his lobbying firm and others. A former legislator, Rep. Eddie Cooper, has pleaded guilty to participating in the scheme after going to work for Preferred Family Healthcare. Prosecutors said last week that former Rep. Henry Wilkins had told the FBI he took $100,000 in bribes from Cranford while in the legislature.

Cranford has also been implicated, but not charged, in a scheme to funnel $400,000 state General Improvement Fund money to an organization associated with Preferred Family Health. Those details emerged in an indictment that led to a guilty plea by former Republican Rep. Micah Neal and a pending trial for former Republican Sen. Jon Woods. They are accused of taking kickbacks from state GIF money they funneled to Ecclesia College in Springdale.

We’ve reported previously that Chesterfield worked with Cranford on a GIF application but not her receipt of money from his company.

Thanks to research done by Mike Wilson in his successful lawsuit challenging legislator-directed spending of GIF Money, I reported in January on money directed to Dayspring, a community health services provider affiliated with Preferred Family Health. In one case, eight Northwest Arkansas legislators backed sending $19,500 of a requested $80,000 to Dayspring to buy the makings for Thanksgiving and Christmas dinners for people they served in an application prepared by former state Rep. Tim Summers of Bentonville, a Preferred Health employee.  In October 2015, Chesterfield and Reps. Fredrick Love and Karilyn Brown backed sending $40,000 to Dayspring for “meals, gifts and services” for the needy in Central Arkansas. This money was passed from the legislature through Central Arkansas Planning and Development but spent as legislators directed.

Central Arkansas Planning records show how Chesterfield allotted her almost $200,000 share of GIF money in 2015. Her biggest single grant amounts were $25,000, which went to PFH, Shorter College Arkansas Baptist College. She allotted $20,000 to UAPB and Philander Smith, among a number of other smaller recipients. The money nominally was reserved for economic development projects, which the application for turkey dinners claimed was a benefit. 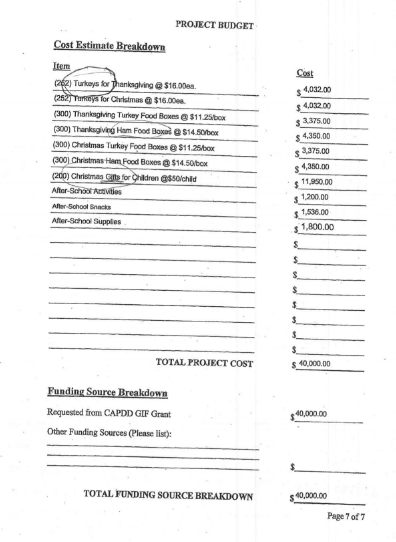 Dozens of legislators recommended payments for various nonprofits for years in a new scheme cooked up after Mike Wilson had earlier gotten direct state appropriations to local agencies ruled unconstitutional. The Supreme Court agreed with Wilson that the Constitution also prohibited legislator-directed spending on local projects, but the spending itself — if aboveboard for purposes stated — hasn’t been challenged as a law violation otherwise. In the case of Neal and Wood, however, they are charged with taking kickbacks from the money.

Cranford who operated a lobbying firm while also a full-time employee of Preferred Family Health and its predecessor corporations, was terminated June  2017. His severance agreement included a $400,000 payment into his lawyer’s trust account and repayment or forgiveness of some $200,000 in debts. An accountant for the organization was charged with embezzling and committed suicide. Another consultant paid by the organization has pleaded guilty and is cooperating with federal authorities, who’ve alleged in court that Cranford talked about killing with a confidential FBI informant. Three other top officials of the company have been fired by its board of directors. The company provides mental health and other services in Oklahoma, Missouri Arkansas, a business that has produced hundreds of millions in Medicaid reimbursements since 2011.

The criminal charges against Cranford and others say they devised schemes to make political contributions and lobby legislators — both illegal under the company’s nonprofit status — and also kicked back money to themselves.

The news about Rusty Cranford doesn’t end with Chesterfield.

Former Rep. Nate Bell and Rep. Bob Ballinger have both been posting on social media over the weekend about 2011 legislation that required bail bondsmen to pay a $100 annual licensing fee to the Arkansas Professional Bail Bonds Association. They say the money mostly went to pay for lobbying services by Rusty Cranford and that Sen. Bryan King, facing Ballinger in a Republican primary this year, fought efforts to overturn the law. A repeal was passed in 2017. A bail bondsman, John Kiesling, had sued over the law but ultimately saw the lawsuit dismissed because the 2017 law made his claim moot. Kiesling contended to me that other legislators who supported the legislation included Henry Wilkins.