The Yellville Chamber of Commerce announced yesterday on its Facebook page that it will no longer continue its longtime role as organizer of the Turkey Trot festival, the Yellville fall festival that has drawn massive controversy for the practice of dropping live turkeys out of an airplane. “After much consideration, discussion, and soul-searching, it is with a heavy heart that we announce that the Yellville Area Chamber of Commerce will no longer be the promoter of the Turkey Trot festival,” the group announced. It is unclear whether or not a new promoter will emerge to sponsor the festival or whether the festival, which has happened annually for 72 years, will take place next fall.

The festival — which also features a parade, food, and so on — has long drawn controversy for the turkey drop practice. In addition to protests from animal rights activists, it has also occasionally run afoul of federal regulators. At one point, they switched to dropping them out of a second-story window, but in recent years they’ve gone back to an airplane.

Wild turkeys typically fly only short distances, less than 100 feet. The domesticated birds dropped in Yellville are not in fact wild turkeys, though they are a breed resembling wild turkeys. For the “turkey drop” they’re flung out of planes traveling 70 miles an hour at altitudes of 500 feet or higher. Some of the disoriented birds manage to survive, some meet gruesome ends. The crowd cheers. The survivors who careen into the street are met by rushing festivalgoers eager for a selfie.

A “phantom pilot” does the dirty work. The turkey drop is not officially part of the festival, although it is the main event and seems to have continued with the acquiescence of local officials and the festival sponsor. In previous Facebook posts, the Yellville Chamber of Commerce has complained about taking the heat for the practice of throwing live animals out of planes, claiming that it is only involved in planning official festival events, setting up booths, and selling merchandise, but “does not have a part in the release of turkeys from airplanes.” The practice is regulated by the Federal Air Administration, which has deemed the practice legal as long as the plane has an altitude of at least 500 feet and the birds aren’t dropped directly over the crowd. “The phantom pilot is named as such for a reason,” a chamber Facebook post in September opined, trying to rebut what it said were inaccurate claims that Yellville citizens were mistreating animals. “There is no airstrip in Yellville and therefore we do not have any authority in terms of flight control. Furthermore, Chamber board members, Turkey Trot sponsors, and Chamber members have absolutely no affiliation, jurisdiction, or control over what any individual does in his or her private plane in the air.”

“Turkey Trot is so much more than turkeys being released from an airplane,” the Chamber’s statement last fall said. “However, to outsiders, that is all it is.”

In 2016, various media outlets revealed the identity of the “phantom pilot” who has done the drops in recent years: Dana Woods, a Mountain View pharmacist who runs Woods Pharmacy and serves on the Mountain View City Council. Woods told the Democrat-Gazette in 2016, “We treat the turkeys right. … We’re good to them.”

The Phantom Pilot Facebook page was defiant yesterday, predicting that the festival will continue and he will continue to throw live animals out of his plane:

It’s my understanding that though the chamber will no longer be involved, there are plans in the works to continue the festival. I wouldn’t revise my October schedule just yet…

Reacting to the chamber’s decision, Woods (I assume), who writes about himself as the Phantom in the third person, stated: “The Phantom is saddened by this news, but urges others to be respectful of their decisions.” 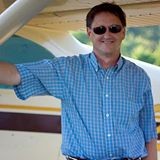 Here’s the full statement from the Yellville Chamber:

After much consideration, discussion, and soul-searching, it is with a heavy heart that we announce that the Yellville Area Chamber of Commerce will no longer be the promoter of the Turkey Trot festival. For many years, we have enjoyed the days of a family-friendly festival that served as a homecoming; an occasion every fall to gather and enjoy a parade, live music, crafts, festival food, and camaraderie. We feel we can no longer deliver the same experience that we have enjoyed in years passed. Our decision was not entered into lightly. Safety concerns, rising costs, and loss of funding were some of the determining factors in making this decision. As a chamber of commerce, our goal is to help our local businesses grow and the festival has been more detrimental to them than prosperous. We remain committed to the Yellville area and appreciate the support that our community has given us over the years and hope that you will continue to support us in our efforts to promote our area.

Sincerely,
The Yellville Area Chamber of Commerce Board of Directors