John Moritz at the Democrat-Gazette reported this morning on a major twist in Supreme Court Justice Courtney Goodson’s lawsuit to stop an out-of-state dark money group from airing allegedly defamatory TV attack ads in advance of the May 22 election: A circuit judge who issued a temporary restraining order blocking the objectionable ads reported income from Goodson’s husband’s law firm on his 2017 statement of financial interest.

The income was earned by Washington County Circuit Judge Doug Martin’s wife, Amy Martin, for work performed at the Texarkana firm of Keil & Goodson. John Goodson, who is Courtney Goodson’s husband, is a partner at the firm. The document says the compensation was more than $12,500 (a specific amount isn’t typically listed on disclosure forms). Moritz reports being unable to reach either Martin for comment.

On Monday, Courtney Goodson filed two defamation lawsuits against TV stations airing ads produced by the Judicial Crisis Network, a D.C.-based conservative political nonprofit that does not disclose its donors. The JCN has spent millions in recent years to elect Arkansas justices by purchasing harsh attack ads against their opponents; Goodson was also its target in a 2016 race for chief justice, which she lost. Goodson claims the JCN’s ads this cycle make false and defamatory claims, including the allegation she accepted expensive gifts from donors while serving on the court. Her suit states that “Justice Goodson has always recused from participating in any cases in which persons or entities with whom she has a close personal relationship and/or who gave her gifts.” 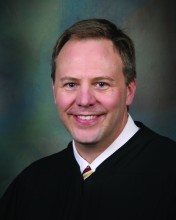 It would be especially uncomfortable, then, if the circuit judge who granted Goodson’s request for a temporary restraining order should have recused from the case. Martin issued the TRO on Monday and scheduled a hearing for Thursday. (A hearing on the second suit, which was assigned to Pulaski County Circuit Judge Chris Piazza, is scheduled for Friday; Piazza did not grant a temporary restraining order in advance of the hearing. Moritz’s reporting also notes Goodson has filed a third suit in Fort Smith.)

The Judicial Crisis Network is pumping money into Arkansas to benefit David Sterling, an attorney for the state Department of Human Services. Court of Appeals Judge Kenneth Hixson is also running for Goodson’s seat, and the JCN has aired ads attacking Hixson as well. TV station filings show the JCN has bought over a million dollars worth of  in Arkansas in the past few weeks.

The unusual situation is beginning to attract attention from outside Arkansas. Even before news broke of Martin’s potential conflict, some questioned the judge’s decision to grant a temporary restraining order before hearing the merits of the claim. Reuters legal analyst Alison Frankel wrote on Tuesday that Goodson’s frustrations with the flood of dark money from the JCN inspire sympathy, yet she may still be on legal ground:

Here’s the problem with Justice Goodson’s litigation to shut down the public broadcast of ads deemed to be false and defamatory: The restraining orders she wants are almost certainly unconstitutional prior restraints, according to First Amendment expert Eugene Volokh of UCLA. In a post Monday night at The Volokh Conspiracy, the law prof said an injunction issued before a judgment on the merits of a defamation claim “is a clearly unconstitutional ‘prior restraint,’ and violates the First Amendment,” Volokh wrote. “Here, there was no trial, no ‘final determination’ and no ‘decision on the merits’— just a temporary restraining order presumably based (in relevant part) on a conclusion that the plaintiff showed a ‘likelihood of success on the merits.’ That is no basis for restricting speech, even for a few days, especially (but only) criticism of a high government official during an election campaign.”

Or, read Volokh himself, writing for his blog on the libertarian website Reason:

Yes, speech that has been finally adjudicated as libelous is not protected under the First Amendment, which can lead to civil damages, in some states even criminal punishment, and increasingly permanent injunctions. But when a judge restricts speech via temporary restraining order, without hearing from the other side, because the judge merely thinks the speech is likely to be libelous, that is a quintessential unconstitutional prior restraint.