State Rep. Warwick Sabin, one of five candidates for Little Rock mayor, has spoken up on the Washington Post report on questionable drug raids by Little Rock police. UPDATE: Frank Scott Jr. and Baker Kurrus also soon had things to say. City officials, however, have been silent.

He issued a statement shortly before a scheduled news conference by civil rights lawyers who’ve taken up the case of Roderick Talley and others subjected to thinly justified no-knock raids by SWAT officers.

I am deeply concerned about the practices of the Little Rock Police Department as described in yesterday’s Washington Post. We need to do everything we can to reduce crime in Little Rock, but not at the expense of violating basic civil liberties and breaking the law ourselves.

Everyone in Little Rock should have faith that they are safe in their own homes, that due process will be guaranteed, that the law will be enforced equitably, and that there will be remedies for any unfair actions. I am particularly troubled that communities of color have overwhelmingly and disproportionately been the target of the no-knock raids described in the article.

We need to make Little Rock a safer place to live for everyone. Those efforts are undermined whenever there is doubt about how our laws are enforced.

As mayor I would immediately demand a full and transparent investigation into the allegations outlined in the Washington Post article, and I call for one now as a candidate for that office.”

The @washingtonpost’s expose regarding the LRPD’s unfair treatment of Roderick Talley is frustrating. It further proves the need for more accountability in LR govt & LRPD. This underscores the importance of our Citizens Review Board & Public Safety Agenda

The City Board meets Tuesday. The subject is likely to come up.

So far Monday, the only response from the city has been of a statement that the Washington Post had reported Sunday:

City Attorney Tom Carpenter said: “The City of Little Rock does not comment on any questions related to pending litigation. The policies of the Little Rock Police Department are in full compliance with both Arkansas state law and federal civil rights law.”

The strong mayor and every member of the city board and the police chief SHOULD comment on such powerful allegations as these. 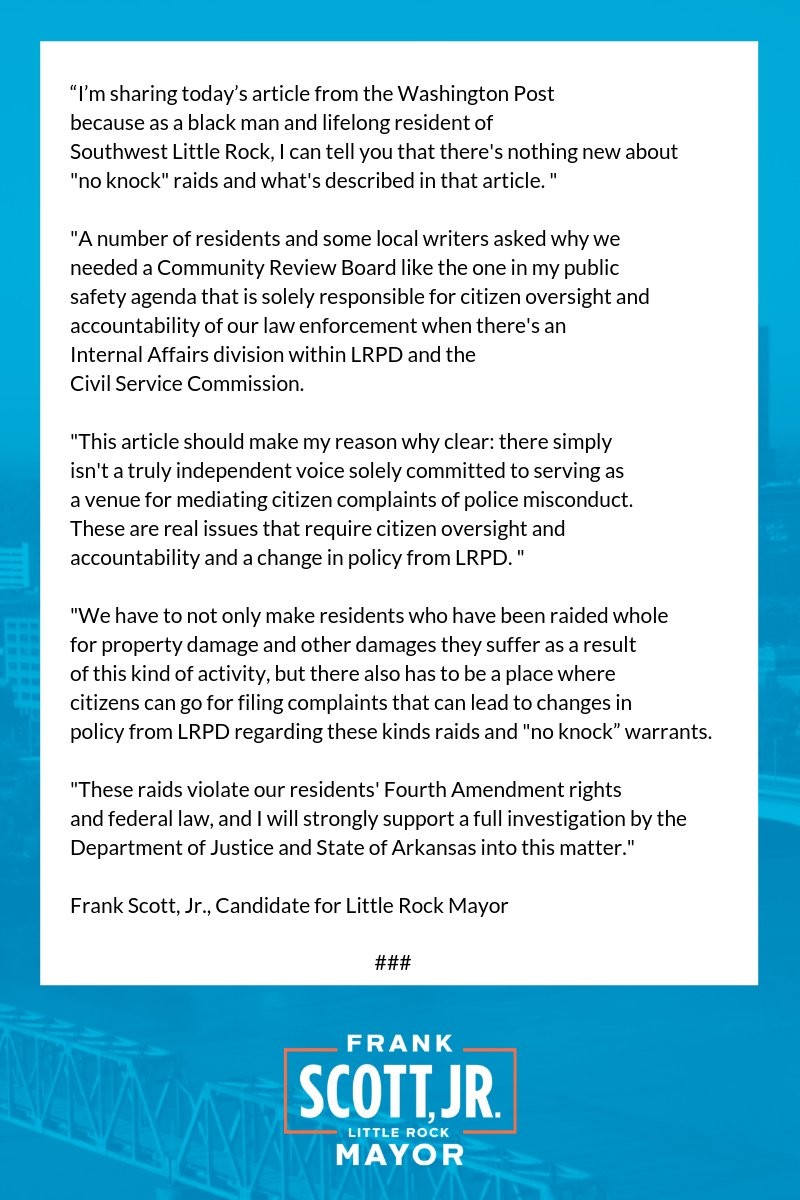 The story in the Washington Post concerning Little Rock’s use of “no knock” warrants is troubling. A prompt and thorough investigation of the particular case is warranted. The results of this investigation will determine what additional actions are needed to be taken to protect and ensure the constitutional rights of all individuals.

In addition, the Board of Directors, which includes the Mayor, should address the matter as soon as possible from a policy perspective.

The policies need to be clear and effective. As the chief executive officer of the City, the Mayor should then promptly ensure that a thorough factual review of current practices and procedures is completed, with a goal of transparency and accountability. This sort of consistent application of sound policy, through clear lines of authority and clears lines of responsibility, is the way to get accountability.

Trust only comes from sound policy, consistently and fairly applied. These actions will lead to transparency, fairness and accountability.

Noticeably absent have been statements from Mayor Mark Stodola, City Manager Bruce Moore and Police Chief Kenton Buckner. City Attorney Tom Carpenter Monday morning issued a reiteration through a city spokesman of a statement he’d given earlier to the Post. He said the city didn’t comment on matters under litigation and that the city followed the law and Constitution. Later, the spokesman issued this slightly longer statement for Carpenter:

– It is not appropriate for the City to litigate cases in the news media. That said, it should be recognized that the City does not agree with all of the factual statements in a recent article in the Washington Post about illegal drug investigations by the LRPD. In addition, the manner in which LRPD carries out some of its search warrants complies with state and federal law. The City looks forward to the total truth on other issues being developed during the litigation.

I reached out to Strong Mayor Stodola. Dead end:


Since this is in litigation, a statement has been issued from the City Attorney’s office

The Washington Post story was disturbing and disheartening. We need to review the policies used by the police, including the use of confidential informants. I will support a discussion at the Board meeting tomorrow.