Citing low scores on many Little Rock School District schools’ standardized test, State Education Commissioner Johnny Key, who acts as district school board under state control, has rejected a new negotiating agreement with the Little Rock Education Association without a change that appears to allow an end to fair dismissal protection for teachers at schools with D and F grades.

There are 16 schools with D grades among the LRSD’s 46 schools and 7 with Fs.

I’ve obtained a copy of a notice Key distributed in which he says that the District, in the “level 5” of state supervision because of academic deficiencies, qualifies under state law for a waiver from the state teacher fair dismissal law.

To that end, Key has ordered Superintendent Michael Poore to make the following changes in the agreement:

* Delete wording that recognizes the as a negotiator on an agreement with teachers for the duration of this agreement and on negotiations of a future agreement. Replace that section with language that says the LREA would continue as a representative so long as it is “deemed by the Board of Education to be in the best interest of the employees and the district.” That sounds like the board could unilaterally end the agreement at any time.

* Remove any limit to petition for waivers from state law on dismissals and hearings for dismissed teachers. The LREA would have to agree to support waivers from the fair dismissal laws when it came to teachers in schools with D and F grades.

This news is unlikely to be well received by teachers. For one thing, it seems to blame district results solely on teachers. The schools with low scores are invariably those with high percentages of poor and minority students, often non-English speakers, groups that nationally tend to lag behind in standardized testing.

We reported troubles on the renewal of the teacher contract earlier. It expires Oct. 31.  Teachers feared in August that Key would reject a new professional negotiating agreement and he has now done so, at least as written.

I’ve been trying to reach Teresa Knapp Gordon, head of the , who is in a meeting. But the document I’ve obtained of Key’s order suggests a continuation of the agreement hinges on teachers agreement.

This could be an issue in the governor’s race. Johnny Key is a Hutchinson appointee and a leader of the Little Rock School takeover effort. He’s a solid supporter of the Walton Foundation “school choice” agenda, including a proliferation of charter schools in Little Rock that have contributed to resegregation and taken many achieving students from Little Rock schools. Democratic opponent Jared Henderson has been endorsed by the Arkansas Education Association, parent of the LREA.

The state took over the district in 2015 because of low scores in a handful of schools. The state has been in charge since. Key fired the first superintendent, Baker because he objected to charter school proliferation and installed Poore. If the schools aren’t making progress, it would appear to be the fault of more than teachers. But Key undoubtedly doesn’t see it that way.

Next year, according to law, the district must be returned to local control in some fashion, but the state Board of Education has resisted taking a formal step in that direction It’s controlled by Hutchinson appointees, most critics of LRSD and cheerleaders for charter schools and interdistrict school transfers, even those that encourage segregation. I expect another run this legislative session to allow still more private operator takeover of schools in Little Rock. 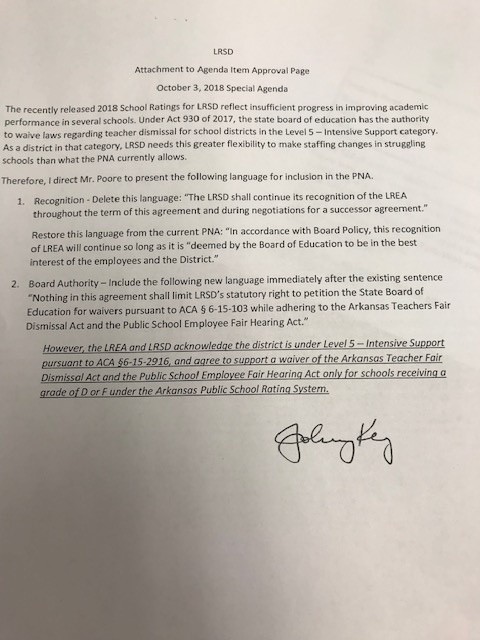