In a press conference on Tuesday morning, civil rights attorneys Ben Crump and Mike Laux introduced several people the attorneys described as victims of “unconstitutional, unethical” no-knock search warrants by the Little Rock Police Department. In addition to the stories of Roderick Talley, Candice Caldwell and Derrick Davis Jr., which were shared at previous press conferences the attorneys held, nine additional individuals shared brief testimonies of the LRPD blowing off their doors and looking for drugs, only to have the charges later reduced or dropped completely when little to no drugs were found. For some, those charges are still pending. Among the individuals who came forward was Lloyd St. Clair, a Little Rock resident who was shot three times in September 2016 when his home was raided by the LRPD.

Crump said he and Laux have been warning of the danger of these no-knock warrants since they learned of them.

“Attorney Laux and I have said from the very if they keep executing these Little Rock, no-knock, unconstitutional, explosion search warrants, somebody was going to get shot or killed,” Crump said. “And that’s exactly what happened to Lawrence [Lloyd] St. Clair, who has ongoing medical issues as a result of being shot three times in the most violent way by the LRPD.” 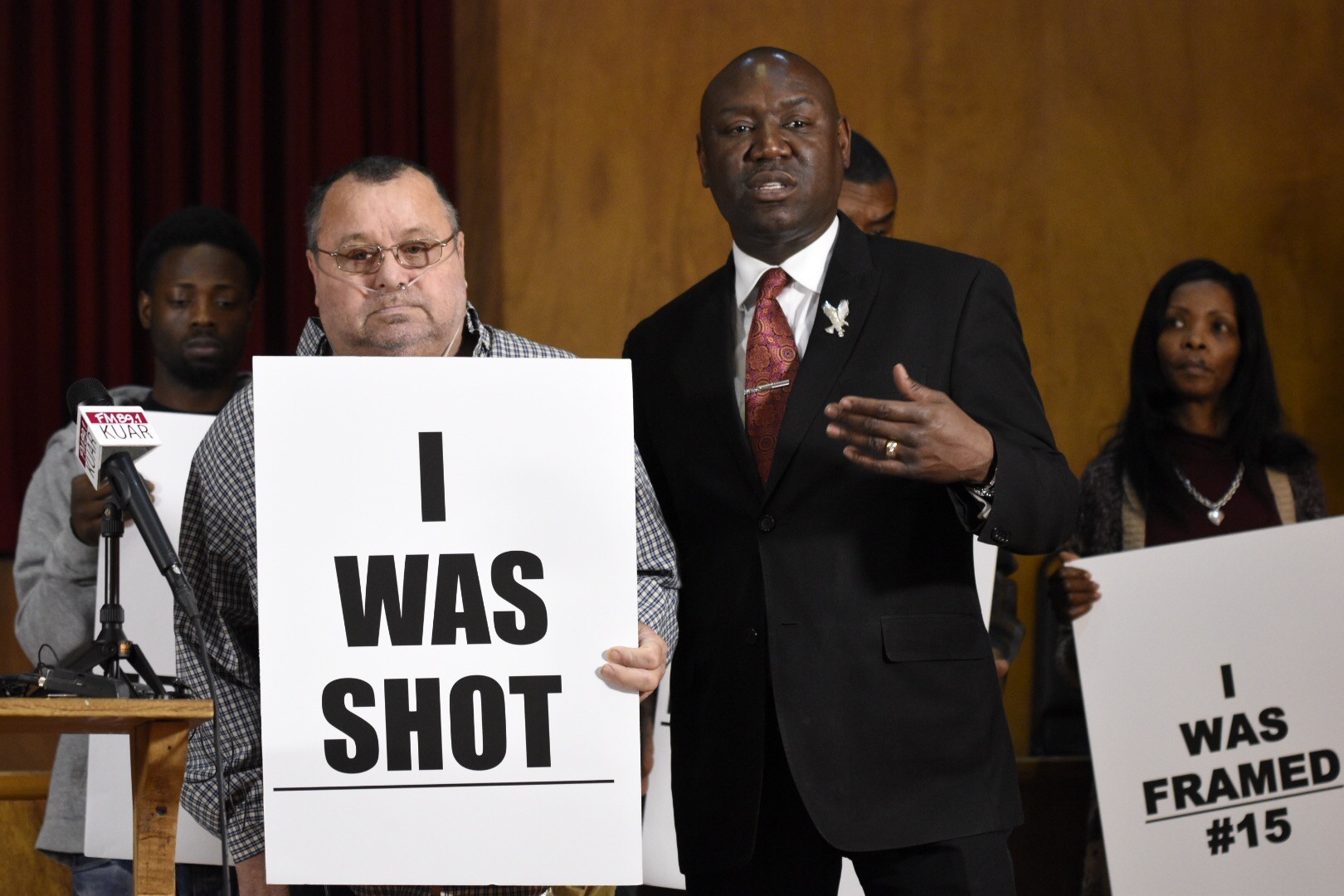 St. Clair, a former truck driver who was 59 years old at the time of the incident, said he was asleep when the doors were blown off of his home. He said he jumped out of bed and grabbed his gun, the barrel of which officers saw pointing out of the doorway before firing eight shots into his bedroom wall. St. Clair said he was hit once in his left arm and twice in his bladder. He said he was operated on four times while at the hospital and spent two and a half months in an induced coma, and according to St. Clair, there are still bullet fragments in his arm and stomach. He now uses a colostomy bag, which he said he’ll have to wear for the rest of his life.

Crump said St. Clair’s experience is similar to other victims of the no-knock “explosion” warrants. “It was like everybody else,” Crump said. “They raided based on an allegation from a confidential informant that they had a meth lab in the house. The speaks for itself, you can see exactly why they said they were coming there.”

According to Laux, the warrant claimed police would find “scores of methamphetamine, enough to distribute all over the southern part of the United States,” in St. Clair’s home. Instead, Laux said they found the equivalent of about three marijuana joints that had been in St. Clair’s home for a year.

“That’s what they found,” Laux said. “That’s what necessitated, and apparently that’s what justified, firing shots from an AR-15 through a wall to a man who’s in his bed.”

St. Clair also said that the address on the warrant was incorrect, and a reporter asked if he thought this was a case of mistaken identity. “If you ask me, they didn’t do their homework,” St. Clair said.

Rachel Salley also spoke at the press conference about an attempt by North Little Rock police, Little Rock police and U.S. Marshalls to enter her North Little Rock home without a search warrant, which KATV covered earlier this month. In a video Laux shared via email after the press conference, Salley and a friend can be seen speaking to officers through her front door as they repeatedly ask for her to let them in so they can speak to her brother, whom officers showed Salley an arrest warrant for. Salley consistently denied the officers entry since they did not present her with a search warrant for the premises, but the video shows that two officers entered her sunroom downstairs while she was at the front door. Salley said the officers only left after her live Facebook stream of the proceedings resulted in KATV showing up to the property. 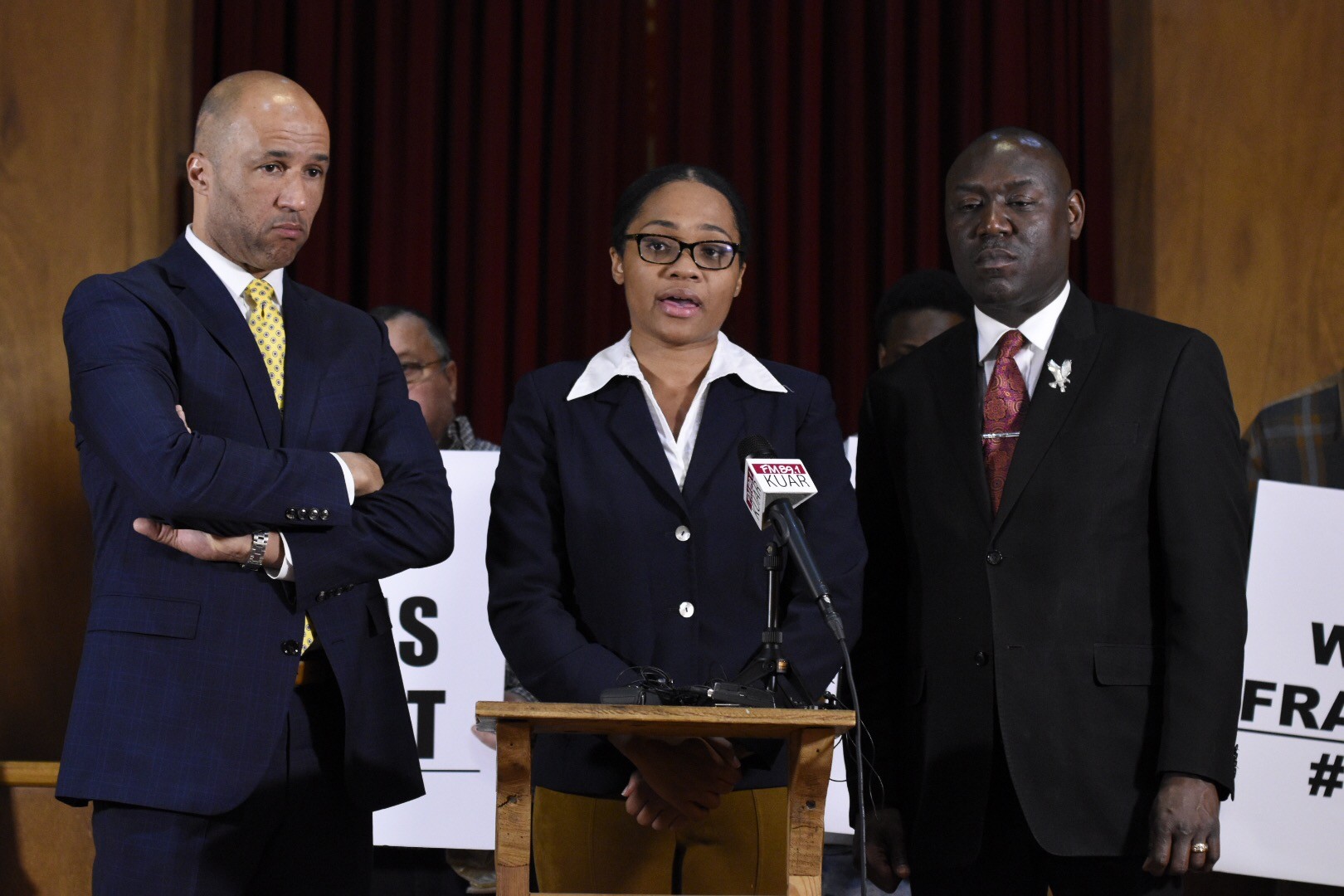 Several other individuals shared testimonies of their homes being damaged and raided by police and of the financial, legal and emotional toll these raids have had on their lives. Crump said they are now on retainer for over 30 people who are filing lawsuits against the city of Little Rock and the LRPD.

Robert D. Jones said he and his wife, Alicia Jackson, were raided by the LRPD nine years ago. “This is an injustice that has been going on, this is nothing new,” Jones said. “And the people who know us here understand that this thing we were accused of is not true. Our doors were blown off, they had concussion grenades, our home was destroyed in ways you can’t imagine. It cost me unimaginable money.”

Other individuals spoke of prolonged legal battles, including London Bradley, who said the LRPD executed a no-knock search warrant while he was visiting with his brother in December 2016. The door was blown off, which set the kitchen on fire. “In the search warrant, they were looking for one individual, but they incarcerated me and my brother,” Bradley said. “I was incarcerated for two years and am still fighting the case today.”

Crump and Laux said the damage done by these no-knock search warrants is wide-reaching and that the city has so far been unresponsive to those impacted.

“This is affecting not just the individuals here, it’s affecting their families and it’s affecting entire communities,” Crump said. “The community has to stand united together and say, we demand that this must stop. I don’t know if we have to take all these members to the next city council meeting or what we have to do to make the city respond. I know Attorney [Laux] and I are doing what we can, we’re filing because that’s one way we can force them to address all these injustices. But it shouldn’t take a lawsuit to make them say, ‘We were wrong, let’s fix the property. … we shouldn’t have [done] this to you. And we’re going to do everything in our power to make this wrong right.’ Where’s that leadership?”

Crump and Laux said they have spoken with Frank Scott Jr., who they said attended one of their earlier press conferences, and he expressed his support for their cause.

“He has long understood the challenges of the African-American community in particular, but certainly to all the Little Rock citizens that are represented up here,” Laux said. “Obviously the government right now is in a transitional period, and there’s a lot of debate about how the type of power the mayor can wield versus the city council. … We think that Frank’s election and his victory really serves as a mandate for change in the city, and we think that that change should begin with a revamping of the police misconduct review process. We think that there should be more independent and citizen input in that process, and we also believe that the at-large positions on the city council serve as a de facto veto for anything that certain communities put forward.”

When asked whether they thought the departure of former LRPD Police Chief Kenton Buckner will mean some of the department’s controversial practices will leave with him, Laux and Crump said the issues are not specific to any single former chief.

“The patterns of this department proceed the chiefs. … This is a chronic problem that is a part of the institution,” Laux said. “It’s a problem with the boat, no matter who the particular captain is. The boat needs to be repaired, it’s not the captain. bring in next, I hope he or she is a reformer and takes serious note of these problems, but he or she will never change what’s going on here unless they are willing to fix the boat.”

When asked whether they think Talley’s arrest in Cross County, where he has been accused of driving into a deputy while attempting to avoid arrest on a failure to appear in court warrant, will damage their civil rights case, Crump said the video evidence of the incident has actually strengthened their case. 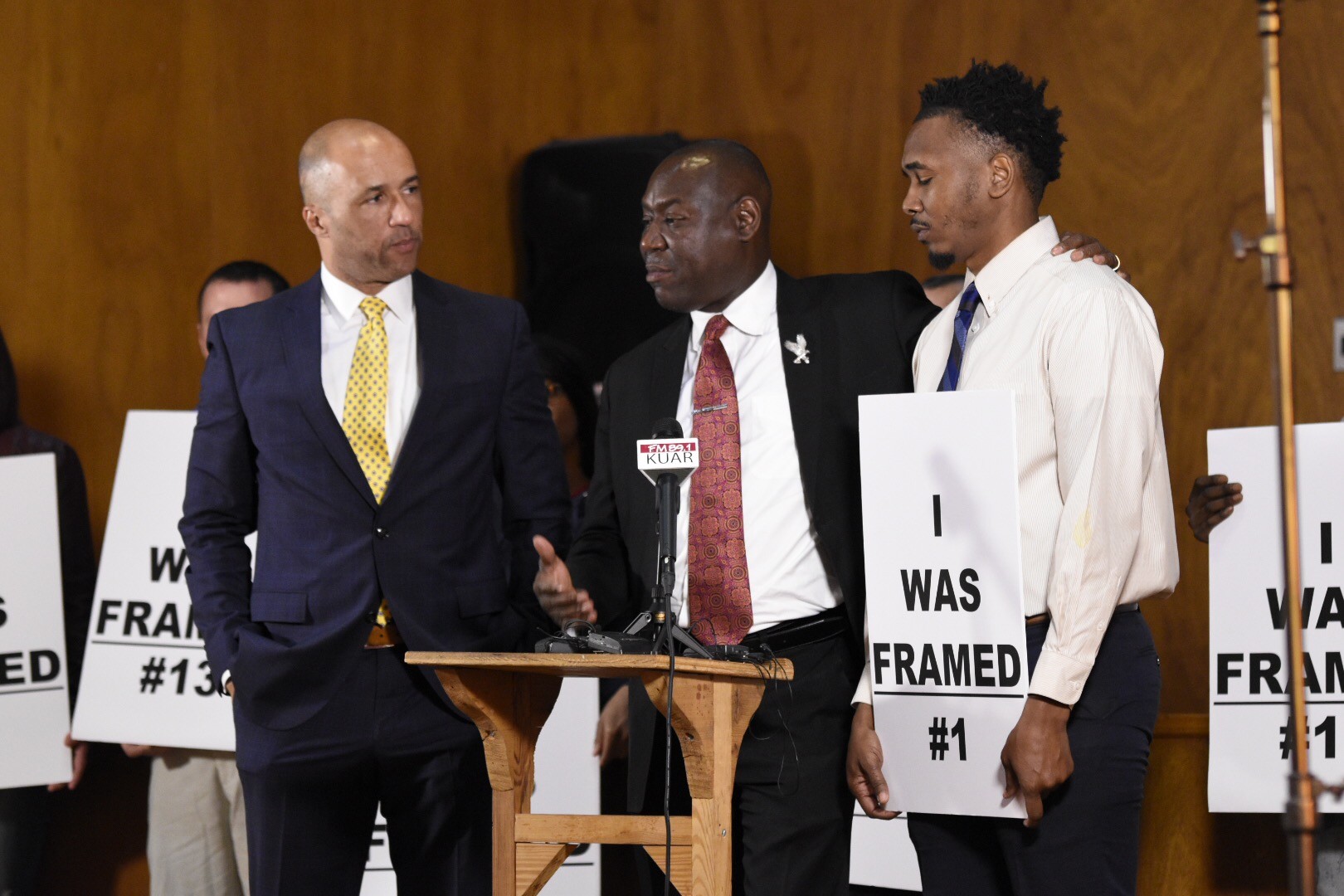 “Actually, I think in some ways it made it because it exposed how the police are not trying to say, ‘We want to be accountable,’ they just want to continue to bully people,” Crump said. “Telling him, ‘We’re gonna get you now’? That’s a bullying tactic.”

Laux added that in terms of the lawsuit, the Cross County incident would be a “ on its face, and a that is subsequent to the case at hand,” he said. “It has nothing to do with what happened to him during that raid.”

Laux and Crump said they have the time to add the new victims to Talley’s existing civil rights lawsuit, but they’re also considering sending his lawsuit through on its own and leaving the case as is “to see what kind of precedent we can set,” but they haven’t made that decision yet. For now, they’re focusing on continuing to alert Little Rock citizens to these cases and seeking justice for the victims.

“I still believe what Martin Luther King Jr. says bears true,” Crump said. “The moral arc of the universe is long, but it bends towards justice, and we’re going to get justice for these people sooner rather than later.”