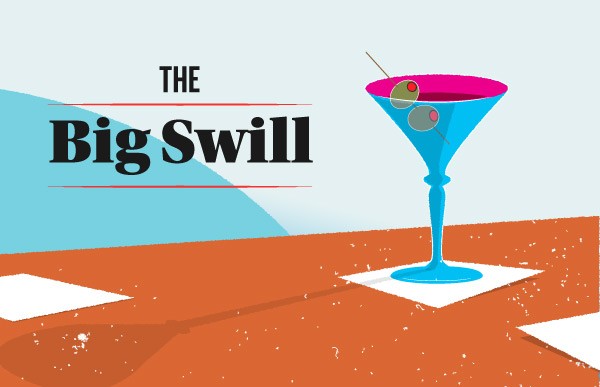 Legislative freebies today are courtesy of the Arkansas Greyhound Kennel Association, which races dogs at the Southland track in West Memphis and just got a boost from voters thanks to the casino expansion amendment that not only lowered the state tax on gambling at the casino but pumps more money into dog racing purse fund. Here’s one topic for legislators to ask about: Dog injuries.

The dog racers will entertain at cocktail hour at Next Level Events. Following is some information for legislators who might like a little prep for conversation.

Grey2K USA, a group working to end dog racing, recently compiled statistics on injuries to racing dogs. Arkansas Racing Commission records show 165 greyhound injuries in 2018, including 87 dogs that suffered broken bones. Carey Theil, director of the group, said it was the highest number of reported injuries in a decade.

The future of dog racing? According to Theil, only six tracks still operate in five states, three of them controlled by Delaware North, which owns Southland. CORRECTION: There are more in Florida, but not for long., once the center of the industry, has voted to end greyhound racing after a political campaign that was supported by both the Republican governor and Democratic candidate for governor and former Arkansas Gov. Mike Huckabee, now a Florida resident. I also wrote originally that both “candidates” for governor supported an end to dog racing. The Republican who was elected said he didn’t think a ban on greyhound racing, or any gambling question, should be in the state constitution.

No such campaign is underway in Arkansas, but it seems likely to eventually be a focus. I put some questions to Delaware North about racing’s future in light of the announced casino expansion. I received responses from the corporate spokesman:

“Racing continues to be an important part of Southland Gaming & Racing’s exciting entertainment offerings and in contributing to our local and regional economy in West Memphis and Arkansas. We’ve actually made a number of improvements to Southland’s racing operations in recent years, including a new onsite kennel facility and renovations to the concessions area.

So for us it’s business as usual going forward regardless of what is happening elsewhere. In addition, our planned expansion of a new casino gaming complex and hotel will not limit the operation of our six-days-per-week racing schedule. Patronage of our racing product has been steady in recent years, and we look forward to that continuing and possibly increasing with our expanding gaming offerings.”

The spokesman also noted that the kennel had been renovated recently. He said, too, that casino expansion plans wouldn’t detract from the dog racing part of the operation.

The current spectator area for racing, which is the upper floor of the current gaming area, will be connected and accessible to the hotel and casino. In addition, the racetrack will be visible from most of the hotel rooms facing it.

Southland handles $3 billion or so annually in casino wagering, about 92 percent of which goes back to gamblers in winnings.  (According to this report, only $18 million was bet at the track itself on dogs in 2016.) The casino wagering produced about $3 million in a month in state tax take in 2018, an amount expected to drop when the new casino law takes effect, an expansion of the business is hoped to eventually offset it.