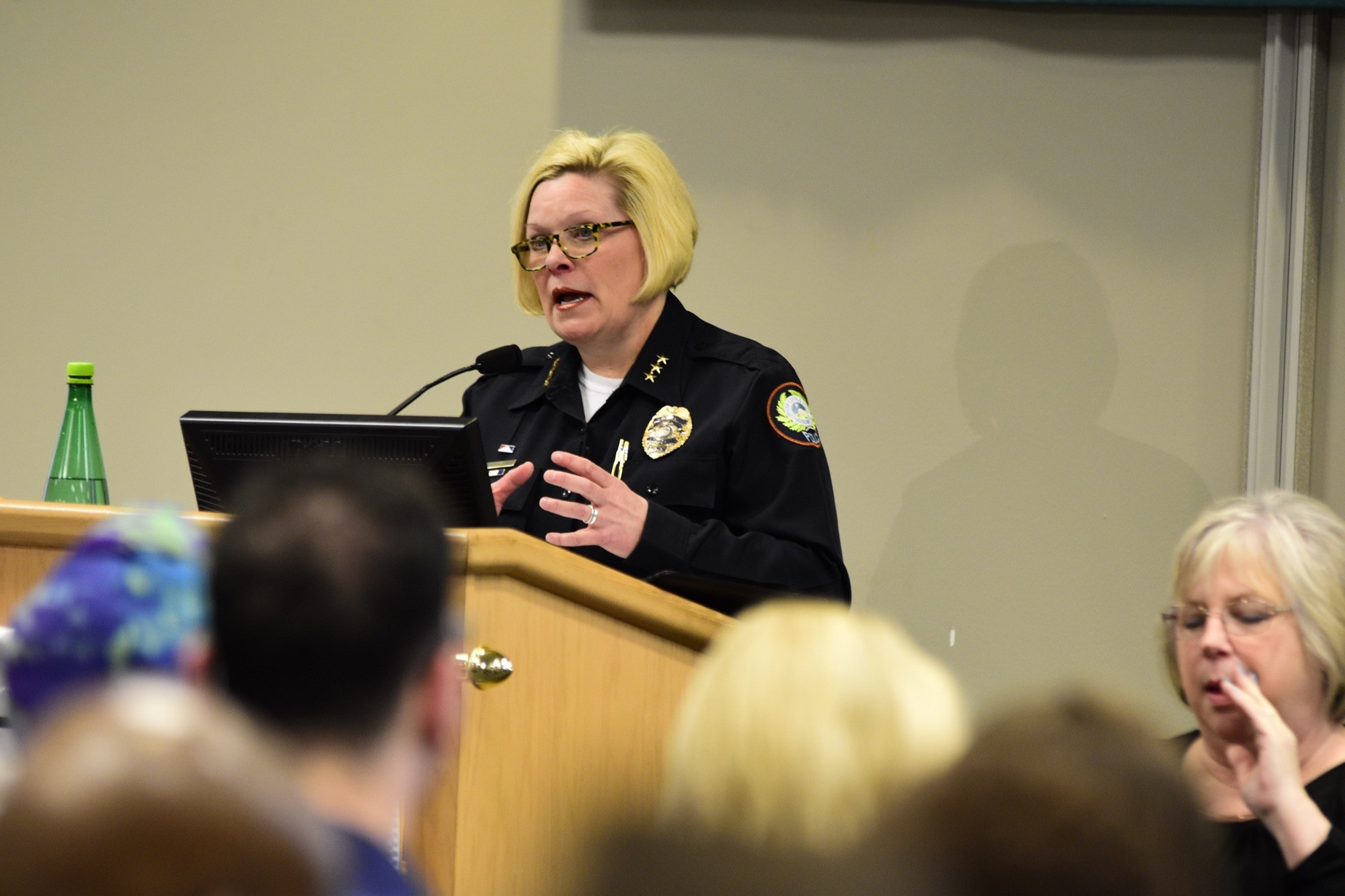 In the fourth and final community forum for Little Rock police chief candidates, LRPD Assistant Chief Alice Fulk spoke to a large crowd at Philander Smith college about her 27 years of experience in the department, the importance of diversity in hiring and promotions and her ideas for improving community relations through “21st century policing.”

Fulk’s “vision” for Little Rock focuses on strengthening the police department’s community policing through her “Taking Back Our City: Block by Block” initiative, which would assign each officer to a city block and require them to make contact with every resident on the block each week. She said community policing is not just for officers on bicycles or horses, but rather a philosophy that “we all embrace.”

“We have to find and make opportunities to get out of our car and to have those contacts so that you all see us, know us, and that you trust us,” she said. “In turn, I really believe that will really help reduce our crime because you’re not willing to help us or to get involved or tell us what’s going on if you don’t trust us.”

A “proud” Hall High School graduate, Fulk said she was born and raised in Little Rock and joined the police force in 1992. Since then, she’s worked in several different divisions of the department, including Major Crimes, Internal Affairs and Administrative Services, as well as both Downtown and Northwest Patrol. She frequently referenced her range of experience as making her uniquely suited for the position, and she also said she pursued and received her master’s degree in Human Resource Management from Webster University in an effort to set herself apart, should the opportunity to become chief of police arise.

“I did that solely because I thought this day may come one day, and that may be the difference in candidates, in who went back and who got that master’s degree,” she said. “I don’t believe that’s asking too much for a chief of police to have. … It shows I’m invested in this city, and it shows I’m invested in educating myself and this community.”

She said her supervision of the Administrative Services division, which oversees budget and payroll, has given her important insight into running the entire police department.

“I didn’t get this job to work budget and payroll,” she said. “But this administrative side has been so beneficial for me. I didn’t realize until I got the opportunity to work with it that I would not have been equipped to be a chief if I had not managed that budget.”

She also told the audience that “relationships are key” to the police chief role, and they “take time to build,” but “we don’t have time, . We don’t. We need to get to work now.”

“I have [relationships] with the community. I have them with the businesses. I’ve got them with the local, state and federal partners,” she said. “We need that now, we don’t need down the road. This is 27 years of relationship-building.”

Fulk ended her presentation by saying that she looks at things through a different, more progressive lens, and wants to be “your new day chief.” She then addressed Mayor Frank Scott Jr. directly.

“ Mayor, March is Women’s History Month,” she said. “I think it’s time to make some history.”

This was met  large round of applause and cheers from the audience.

Fulk then answered questions from the audience about diversity within the police department and racial tension between the force and the community, as well as several inquiries into the Feb. 22 fatal shooting of Bradley Blackshire by LRPD Officer Charles Starks after a traffic stop.

Multiple students from Philander Smith College asked Fulk why the dash-cam video of Blackshire’s shooting had not been released yet and why Starks has been “relieved of duty” but continues to be paid by the department. Fulk said she could not discuss details of an ongoing investigation and explained that Starks remains on the payroll because all officers involved in shootings or use of deadly force deserve “due process” in administrative investigations into the incidents.

“You can’t just say, ‘I believe we should be diverse,’ but then we don’t actually hire diversity,” she said. “They’ve got to see themselves sitting as a captain one day at that police department. They’ve got to be able to see themselves as a chief one day at that department. And if you don’t do those things, if you don’t walk the walk, people figure it out real quick. I’m very committed to walking the walk.”

She said hiring more diverse officers is key to creating a department with demographics more reflective of the city, saying that officers should do more recruiting in criminal justice courses at historically black colleges and universities.

Fulk said another goal of hers will be to establish monthly meetings with the Fraternal Order of Police and the Black Police Officers Association, saying cooperation between the two organizations will be crucial to mending relationships strained by racial tension within the department. 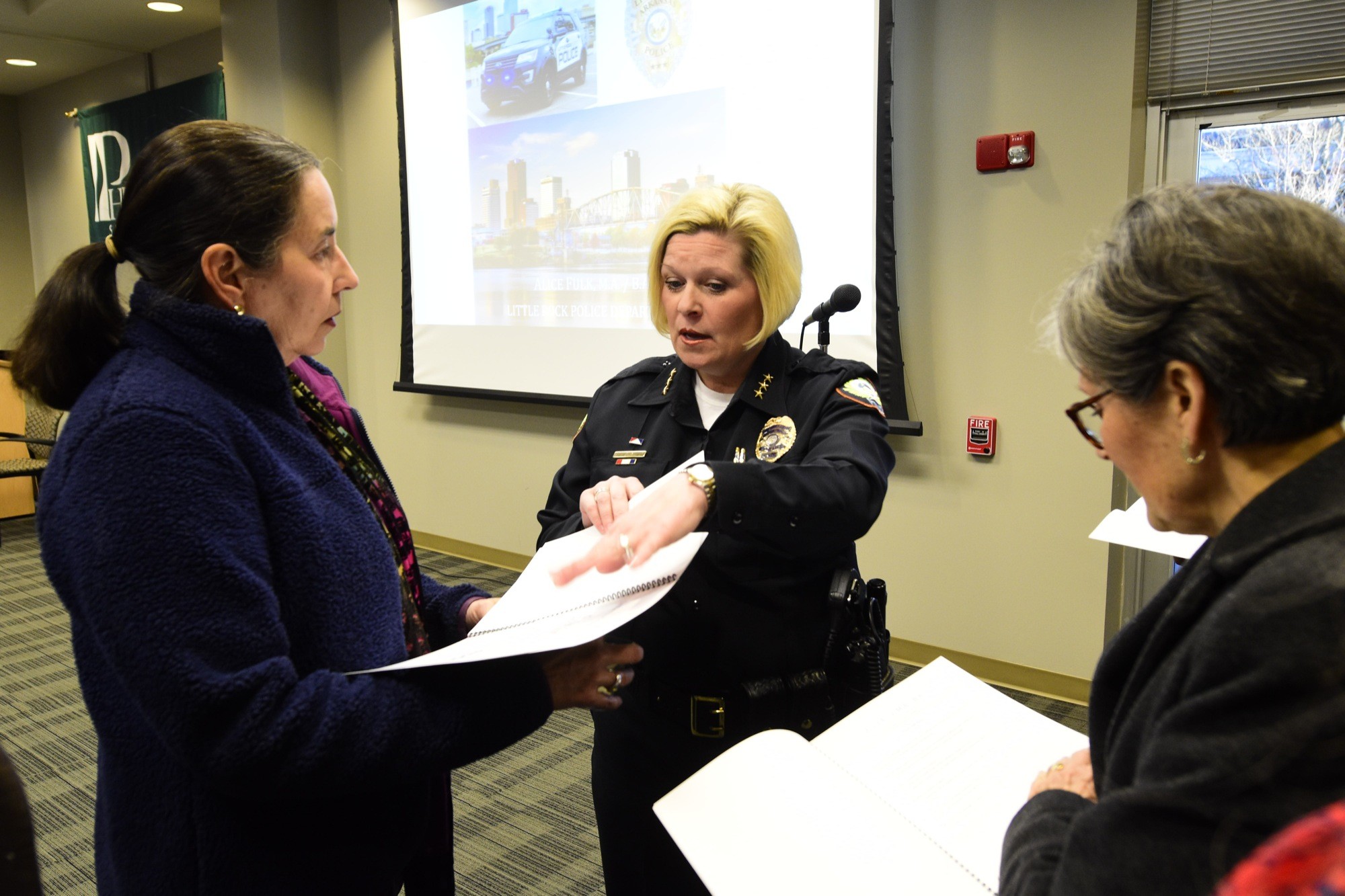 Asked about residency requirements for LRPD officers, Fulk said that while the department cannot mandate that officers live in Little Rock, she supports creating more incentives to keep officers living within the city limits. One person also pointed out that Fulk herself lives in Maumelle.

“If I become chief, I’d put my house on the market tomorrow,” she said. “Clearly this job means a lot more to me than having a bigger house than I did in Little Rock.”

Several people asked why the LRPD has not begun using body cameras. Fulk said she has supported the use of body-worn cameras since 2014 and the department has issued Request For Proposals for them, but their cost has prohibited the LRPD from adopting them.

Fulk is the only female candidate for the position, and when asked how she feels her qualities and experiences as a woman will be an asset to the job, she said women look at things through a “different lens” than men.

“That’s not right [or] wrong, but I think it brings more things to the table,” she said. “We’ve looked at the lens for the last 154 years from the other side. Let’s give it a chance.”

Fulk was asked several different questions as to how her leadership will be “any different” than that of former Chief Kenton Buckner, whom she served under. Roderick Talley, the plaintiff in a case over abusive LRPD practices in drug raids, asked Fulk what makes her an “exception to the fallacy ‘guilty by association’ when you served under what the majority of us would consider an incompetent chief.”

“I’m my own person,” Fulk replied. “I have served for a lot of people. But at the end of the day, I am my own person. People that know me that. … I want to be judged on my own decisions, not on someone else’s.”

Scott closed the forum by announcing that the video from Blackshire’s shooting will be released to Blackshire’s family this morning and to the public afterward. He also said he’ll be “acting with deliberate haste” to decide the next police chief, and he hopes to make his choice in the “next few weeks,” but set no deadline for the decision.