The Senate Revenue and Taxation Committee this morning endorsed Sen. Jim Hendren’s SB 571 to provide an income tax cut for low-income people and make up the revenue loss with an increase in the tax on cigarettes and other smoking products.

Hendren amended the bill to say that tax revenue flowing to a trust fund for an earned income tax credit trust fund would first donate $83 million, rather than $55 million, to general revenue. This is to make up for an expected estimate of a decline in of cigarettes on account of an increase in the tax from $1.15 to about $1.95 a pack. The bill also imposes a 68 percent tax on other smoking products, aimed at the growing habit of vaping.

The bill raises to $8,899 the amount of income that is tax exempt, increases the standard deduction from $2,200 to $3,300 and provides an earned income tax credit of 5 percent of the federal EITC. An amendment offered today would allow the state to either reduce or decrease the credit depending on the income.

Sen. Trent Garner tried to delay consideration of the bill until Wednesday because it had just been introduced Thursday and he’d heard from many constituents. His motion failed. Sen. Jason Rapert, a co-sponsor, also said he’d like a little more time to hear from constituents.

Hendren said the EITC was the most controversial part of the tax cut. He said about half the savings would be realized by the change in the standard deduction and low-income cut.  He said the small refund some would realize should be viewed in the context of the states sales tax, which puts a disproportionate burden on lower-income people.

Garner asked why a three-fourths vote wasn’t required on the cigarette tax. Hendren said he was relying on a legal opinion. It is a new excise tax of 20 percent of the retail price of cigarettes, not a per-pack tax as now exists. Based on recent numbers, the average state EITC would be about $130 for the 275,000 to 300,000 taxpayers who qualify.

Here’s the revenue impact of the bill released today by the Department of Finance and Administration.

Sen. Jonathan Dismang, chair of the committee, has expressed opposition to the bill. He raised questions today about whether this bill would make tax reporting more complicated. Hendren said he didn’t think so.

Garner objected to the burden a “poor mother” and cigarette smoker would face from the legislation. “Isn’t this going to increase their cost every single day,” Garner asked. Hendren said the pack-a-day smoker likely will pay more, even with the tax benefit. But the non-smokers will be subsidizing the costs of smoking less.

Rapert said he’d heard from vape shops that said they’d be put out of business by the new tax as well as from smokers.

Hendren noted that the fiscal impact of a vaping tax is relatively small, around $5 million a year. He responded to criticism that the tobacco tax would far exceed neighboring states, except Oklahoma, which taxes $2.03. He said he was concerned about black market sales. But he said a tax that reduces smoking will reduce health care costs. “It’s a balance between health care policy and fiscal policy,” he said.

Garner adopted the tobacco industry talking point that vaping has encouraged people to stop smoking and e-cigarettes are believed to be less harmful. Hendren said, “kids 16 years old aren’t getting on vaping to get off cigarettes.” Vaping, he said, “is a chemically addictive product” and we don’t yet know the long-term impact. Even this bill won’t make up the cost of smoking products in ill health, he said. 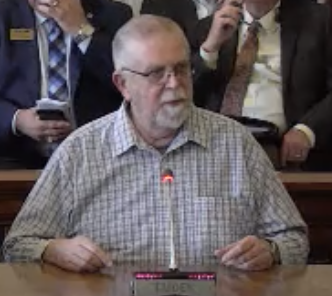 shop owner in Otter Creek, touted the use of the product to quit smoking and noted that liquid sold that don’t contain nicotine. He said it was likely the tax would “close the door to my shop.” He says that would put two employees out of work. “This tax will hurt people who own vapor shops in a very harsh way.” He said there were about 300 vape shops in the state. Other spokesmen for the businesses made similar points. They also that the tax would require punishing taxes on inventory held the minute the bill took effect. Hendren said that was not the intention.

Sen. Bruce Maloch moved for a do-pass on the bill and Sen. Cecile Bledsoe seconded the motion. Garner opposed it, again urging a delay for two days. He called the bill creating a “government-run Ponzi scheme.”

Hendren said he hoped to take the bill to the Senate floor Wednesday. The bill carries 17 sponsors, needing only one more for passage if Hendren’s legal assessment is correct. It is expected to face a tougher fight in the House, where the legislation has 40 sponsors, but faces stated opposition from key committee members, including Revenue and Taxation Committee Chairman Joe Jett, once a proponent of the earned income tax credit before he switched parties from Democratic to Republican. He says taxes have been raised enough. Jett owes his chairmanship to House Speaker Matthew Shepherd, who also controls membership of another committee to which the bill might go, House Rules.