Initially, I was provided notice and a copy of a memo sent to court employees by another source. 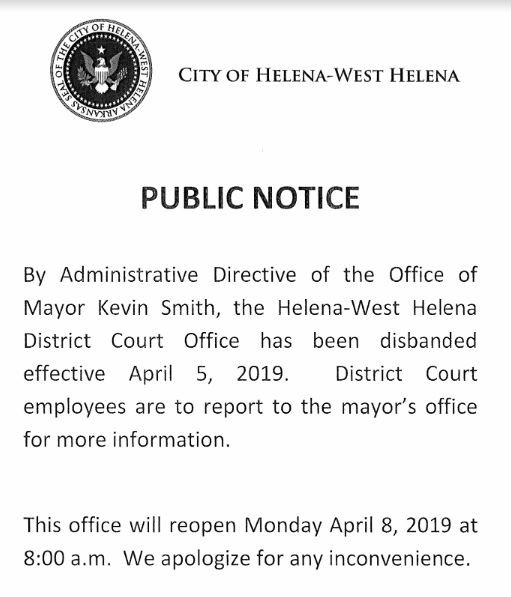 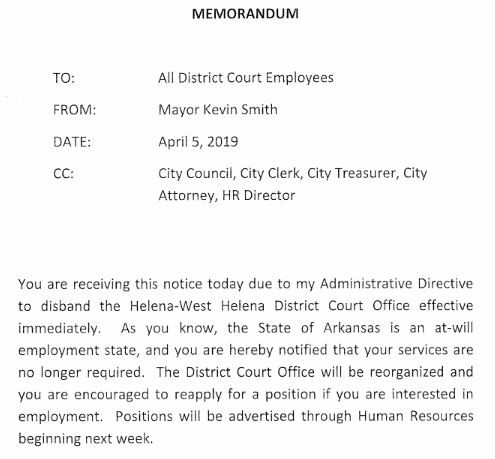 I didn’t originally know the cause of this action or how many people were affected. I was copied on a letter from three members of the Helena City Council have a special meeting at noon Monday to discuss the situation.

UPDATE: A brief rundown from a telephone conversation with Mayor Smith.

By law, the six-person staff of the court — not the district Judge Durwood King — is hired by the mayor. The current staff was carried over from the previous administration. Smith said he’d coordinated with King on the action today.

He said the move is partially an outgrowth of a legislative audit filed last November that noted some financial discrepancies and raised questions about hours worked by court staff for other courts.  A State Police investigation prompted by that audit is ongoing, Smith said. He also said he’s been coping with a variety of city financial issues since taking office in January, one being uncollected fines.

Smith said he hadn’t acted individually against court employees, but dismissed the office so it could be reconstituted. He said all were welcome to reapply and he wouldn’t comment on chances of re-employment.

Smith said since he’s taken office he’s found a number of issues related to law enforcement generally in the county that need to be addressed. The action today is part of a plan to rebuild the district court. “The ultimate goal here is of the citizens,” he said.

UPDATE II: Council member Don Etherly, a lawyer, led the call for a special meeting. He takes exception particularly to Smith’s view that the mayor controls the court employees. Etherly contends — and says he’s pursuing a related lawsuit — that court employees are state employees beyond the mayor’s control. If change is needed, the judge should make that decision, he said.