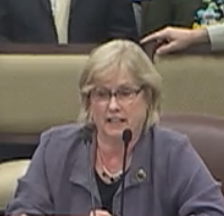 As mentioned yesterday, a legislative audit committee today reviewed a recent audit of the Arkansas Educational Television network that found some deficiencies but the questioning was brief.

AETN Executive Director Courtney Pledger said mistakes were unintentional and procedures had been corrected. These included unreimbursed personal use by the director of an agency vehicle and also failure to follow purchasing procedures on a contract to produce a documentary. Sen. Jimmy Hickey of Texarkana asked if the agency understood procurement law, which the legislature has endeavored to improve. Yes indeed, she replied. Note of irony was the Tweet today from AETN announcing its program with the Department of Finance and Administration to instruct state employees in, you guessed it, procurement.

Sen. Trent Garner of El Dorado observed that there were potential problems in two hats Pledger has worn — director of AETN and head of the separate AETN Foundation, to which Pledger went for that documentary money. It wasn’t mentioned that the Foundation board has stripped Pledger of that role. The AETN Commission, appointed by the governor, has threatened to sever its relationship with the Foundation unless Pledger gets the post back. Her removal followed Pledger’s firing of Mona Dixon, long-time head of development. The Commission meets Friday.

Nobody asked Pledger about my pet peeve: Re-runs of Lawrence Welk.

The legislative committee received and filed the AETN audit. No further action was taken.