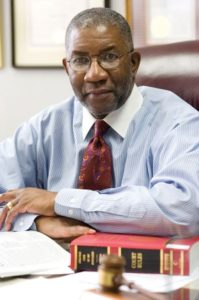 Judge Wendell Griffen says a pending ethics complaint against him should be dismissed because action hasn’t been taken in time set out by the rules.

The Judicial Discipline and Disability Commission is supposed to hear the judge’s challenge of a finding of probable cause that he acted unethically by participating in a death penalty demonstration the same day he decided a property law case involving a drug Arkansas wanted to use in an execution. His ruling had the effect of delaying an execution. The Arkansas Supreme Court then removed him from death penalty cases and instituted the ethics review. Griffen has said his views didn’t affect his judicial finding that day and his participation in the demonstration was protected by the First Amendment. Another judge made an identical decision on the facts in the case. Griffen has argued the case should be dismissed on summary judgment because he had done nothing unethical.

The complaint was filed on April 17, 2017. Griffen’s lawyer, Michael Laux, said in a news release that the rules of the Judicial Discipline and Disability Commission say complaints shall be dismissed if not disposed of within 18 months. Said Laux:

Laux says the case should be dismissed immediately.

There are simply no two ways about this and any failure to do so can only be explained as another instance of unequal, disparate treatment against him. What’s fair is fair, and all we have asked for is fairness. We shall await the JDDC’s dismissal order and provide it to the media when it is received.

UPDATE: I learned Friday, May 23, that the Discipline Commission, in a one-sentence order, had dismissed Griffen’s motion seeking a summary judgment in his favor based on the law. When the Commission dismissed his complaint against the Supreme Court for its handling of his case, it did so in a multipage argument laying out the legal reasoning.

Griffen’s lawyer has reason, based on the fact, to believe there are different standards for Wendell Griffen than everyone else. If the plain language of the rule that a complaint must be decided in 18 months doesn’t produce dismissal of the charge against Griffen, we’ll know it’s so.