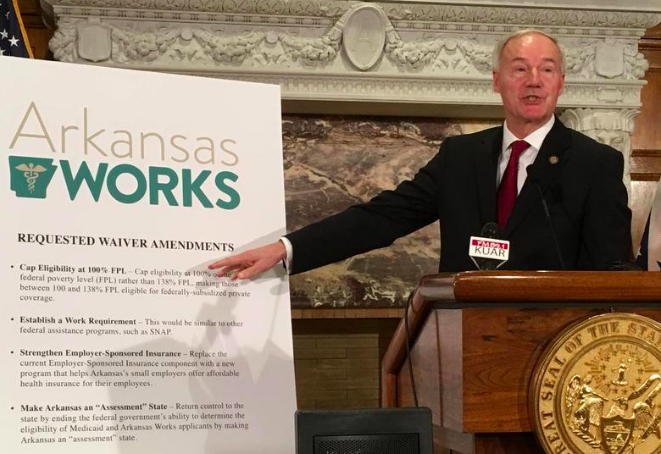 IT DEPENDS ON HOW YOU DEFINE ‘WORKS’: Legal brief says Gov. Asa Hutchinson’s Mediaid work rule has been unhealthy for thousands of Arkansans.

Plaintiffs in the lawsuit challenging a work rule to qualify for expanded Medicaid coverage have filed their brief in the government’s appeal of a lower court ruling striking down the work rule in Arkansas and Kentucky.

There’s no “news.” The brief restates the argument that Medicaid was enacted to provide health coverage, not to be used as a work program. Saving money is no argument for making participation harder either, else why not just shut it down altogether for total savings? There’s no evidence of a more productive or healthier population of the poor through the rule waiver Health and Human Services granted Arkansas and Kentucky.

But the brief is worth reading for how thoroughly it debunks the reasons Gov. Asa Hutchinson and others have offered for a rule that has produced little but misery for thousands of Arkansans.

So, for that reason and for the record, here’s the brief.

In approving these projects, the Secretary ignored the core purpose that Congress set forth in the Medicaid Act—to enable states to “furnish medical assistance” and “rehabilitation
and other services” to low-income people—and he failed to confront the reality that the projects inhibit, rather than “promote,” this core objective.

Some 18,000 were thrown off Medicaid in Arkansas in five months. The disaster included a misbegotten original plan to make poor people in computer-deprived Arkansas maintain eligibility by computer. Outreach has been poor in other ways. Not that the legislature minded. They WANT to strangle “welfare” services.

The introduction to the brief filed in the D.C. Circuit Court of Appeals by a number of groups including Legal Aid of Arkansas is worth repeating:

This case challenges the efforts of the Executive Branch to bypass the legislative process and act unilaterally to “comprehensively transform” Medicaid, a cornerstone of the social safety net that currently provides health insurance coverage to more than 65 million low-income individuals. Purporting to invoke Section 1115 of the Social Security Act, which allows only “experimental, pilot, or demonstration” projects “likely to assist in promoting the objectives” of Medicaid, the Secretary of the Department of Health and Human Services approved projects in Kentucky and Arkansas that, for the first time, require individuals to meet a work requirement to maintain eligibility for medical assistance, and that do so as part of a package of eligibility restrictions, penalty provisions, and benefit reductions that substantially limit health coverage and access to care. In so doing, the Secretary effectively rewrote the Medicaid Act by regulatory fiat, overturned a half-century of administrative practice, ignored swaths of social science evidence and data, and threatened irreparable harm to the health and welfare of tens of thousands of people.