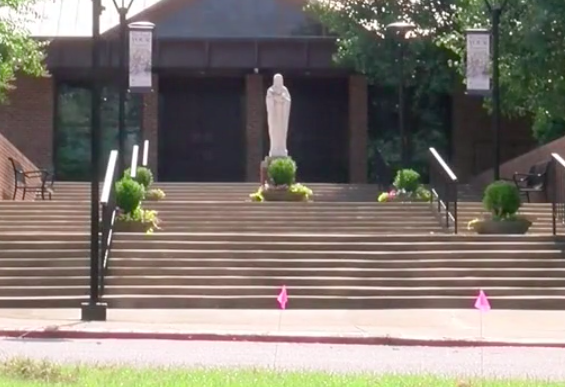 HOLY SOULS: Priest there abused boys in the early 1970s, according to claim settlement.

KARK/FOX 16 broke the news last night of a $790,000 settlement by the Catholic Diocese of Little Rock with five victims of priest abuse in the 1970s.

The men, some of whom were quoted in KARK’s report, said they’d been abused by Father John McDaniel, who died in 1974, at Our Lady of the Holy Souls Catholic Church in Little Rock.

One victim wrote of the experience.

That victim recalling McDaniel telling him that “he was a horrible, evil kid. No one would ever love him, God hates him, he would never have any friends and that this was their secret.”

The first victim saying that once Fr. McDaniel went into his classroom and discounted his credibility in front of his peers. “He pointed at me and told the teacher don’t ever believe anything that boy says or tells you. You cannot trust anything he says.”

Both were also subjected to sexual acts.

“They were never the same after that,” says Attorney Josh Gillispie, who handled the case. “Something was permanently broken in them after these experiences.”

The Diocese issued this statement:

Fr. John McDaniel was included on a list of diocesan priests for whom allegations of sexual abuse of a minor have been admitted, substantiated or determined or considered credible. When this list was released on September 10, 2018 Bishop Anthony B. Taylor said, “This is being published as part of the Diocese of Little Rock’s ongoing commitment to transparency and to encourage persons sexually abused by clergy or anyone working on behalf of the Church to come forward.”

Some of Fr. McDaniel’s victims did engage legal counsel to seek a settlement for money from the diocese which was mediated by a mutually agreed upon third party in May.  There were no limits on confidentiality in the agreement that was reached, which allows the victims who participated in the settlement to release details at their discretion, either themselves or through their attorneys

Now that this settlement has been made public, the diocese is in a position to provide additional details which will inform its Catholic faithful about how their money is being spent.

In the present case, the settlement was $790,000.  Travelers Insurance, the carrier for the diocese at the time these victims were sexually abused, paid $250,000.  The remaining $540,000 was paid from the insurance fund of the diocese.

Anyone who has been sexually abused by clergy or anyone working on behalf of the Church is strongly urged to first contact the civil authorities by calling the Arkansas Child Abuse Hotline (800-482-5964).

The Victims Assistance Coordinators for the diocese, Dr. George Simon and Dr. Sherry Simon, are also available to offer assistance and can be reached at (501-664-0340, ext. 425).

Gillispie objected later to my failure to include any statement from him and complained  the Diocese statement made those with complaints appear to be money grubbers.

Gillispie’s release on the settlement didn’t reach us yesterday.   I learned of it on TV last night But I have now received a statement from SNAP Arkansas, a group aimed at abuse in the clergy. It, and Gillispie, indicate the matter is not over.

Now that five men have bravely disclosed their childhood sexual abuse at the hands of a priest, Arkansas Catholic officials must work to find others who were hurt and may be trapped in silence, shame and self-blame.

We are grateful to the survivors of Fr. John McDaniel who stepped forward, sought justice and exposed this predator. We believe that other victims of sexual violence will feel vindication because of their courage, and we hope this settlement brings them some measure of healing.

But while this case has settled, the work is far from over. Most abuse victims never report what happened to them and instead live silently with their pain. If Bishop Anthony Taylor wants to be a real shepherd, he will use parish bulletins, church websites and pulpit announcements to urge anyone with information or suspicions about Fr. McDaniel – or any other abusive priest, nun, deacon or other church staffer – to come forward to independent sources of help, like police, prosecutors, therapists and support groups like ours.

We also call on church officials from the Diocese of Little Rock to explain why this settlement was made public by the victims and their attorney, and not by officials at them diocese themselves. According to reports, the settlement was reached in May but is only being made public nearly two months later. Such action does not live up the promise of being “open and honest” that church officials have been repeating since 2002.

And we hope that legislators in Arkansas are paying attention to this case and how survivors were forced to seek redress from the church itself instead of being able to use the court system. We hope this news will spur decisionmakers in Arkansas to begin the much-needed process of reforming their statute of limitations laws that protect institutions and abusers instead of children and survivors.

Here, belatedly, is the full release Gillispie issued yesterday. It says in part:

“While this is far from the first or only time a priest in Arkansas has abused boys, we believe this is the first time the Diocese has agreed to pay monetary damages to compensate for the indescribable harm inflicted upon these men,” says Joshua Gillispie, of Little Rock, one of the attorneys for the victims. “We are very proud of our clients, who had the strength of heart and mind to come forward and hold the Diocese of Little Rock responsible for its long history of misdeeds.”