Another story of the perils of engaging in legal behavior while black.

WMC5-TV in Memphis reports that four Wynne students — all black — were held at gunpoint by a Wynne resident while going door to door selling items to raise money for school athletics.

In a media statement, Wynne Police Chief Jackie Clark said officers responded to a report of “suspicious persons” and arrived to find four juveniles lying on the ground with a woman standing over them with a gun. The officer let the children stand up and they explained they were selling cards for a school athletic program.

Bill Winkler has lived in the neighborhood for four decades and says seeing the students isn’t uncommon.

And what happened next? The students were held at gunpoint last week.

Kelly doesn’t have a mugshot because Cross County Sheriff David West told WMC Action News 5 that she had a “medical issue” while she was being booked.

Kelly is the wife of Cross County Jail Administrator Joe Kelly, one of West’s employees.

“During that time she was as at the jail, a bondsman arrived and bonded her out, and they went back home,” West said.

West maintains despite no mugshot, which is standard procedure for anyone booked into jail, Jerri Kelly did not get preferential treatment. Her husband, Joe, remains on the job.

“I’m professional. My department is professional. There was no special treatment. She went through the steps just like any other person would,” said West.

Other fallout: The school district is considering a change in policy allowing students to solicit money door-to-door.

UPDATE: On Thursday, Blue Hog Report published an item that indicates the Kelly’s live in a rental property owned by the sheriff, who insisted no preferential treatment was extended. He also discovered a mug shot WAS taken for Kelly’s initial court appearance today. 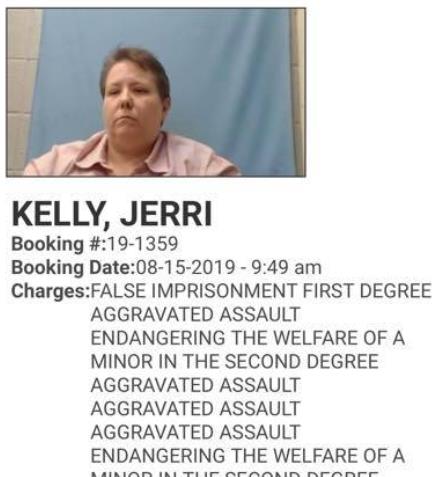 I also learned today that the affidavit submitted by Wynne police for a warrant in the case indicated that jail administrator Kelly made the call that sent Wynne police to the house where his wife was found holding the youths at gunpoint. The officer who responded knew the boys because he’s a school resource officer. He said that Kelly told him she’d gone outside and stopped the boys as they approached her house after she’d watched them visit a neighbor’s house. She reportedly said it didn’t look like they were selling discount cards to her.