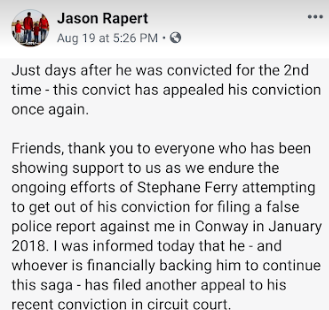 Stephane Ferry has served notice of appeal of his conviction Aug. 9 in Faulkner County Circuit Court on a misdemeanor charge of filing a report in 2018 falsely accusing state Sen. Jason Rapert of Conway of threatening him.

The conviction was after a new trial of a charge on which Ferry had been convicted in district court. Ferry complained to police that Rapert had threatened him. Rapert, who recorded their telephone conversation, said Ferry threatened him and two courts have sided with Rapert.

Jeff Rosenzweig, attorney for Ferry, said in a notice of appeal that such cases normally would go to the Arkansas Court of Appeals but said this case would raise an interpretation of statute and thus he’d seek Arkansas Supreme Court review.

Judge H.G. Foster, who convicted Ferry in the most recent case, sentenced him to 90 days in jail, with 60 suspended and ordered him to have no contact with Rapert. Rosenzweig has asked that Ferry be allowed to remain free on bond during the appeal. He said Ferry had caused no further trouble since the original incident 18 months ago. Said Rosenzweig:

The appeal is not for the purpose of delay and raises a substantial
questions of law or fact. Specifically, a leading question is whether
what Ferry reported was a fair paraphrase of what the alleged victim said.

Rapert apparently was not happy to learn the notice of appeal was filed this week.

According to a screenshot sent me of a post on Rapert’s personal Facebook page, he said Ferry’s “attorneys are doing all they can to keep his saga alive for some reason. I think I know why and I bet you do, too.”

Rapert’s post continued: “If you see this man in Conway let me know.” Said Rapert: “He is a menace and trouble. I am ready for him to permanently leave our community.”