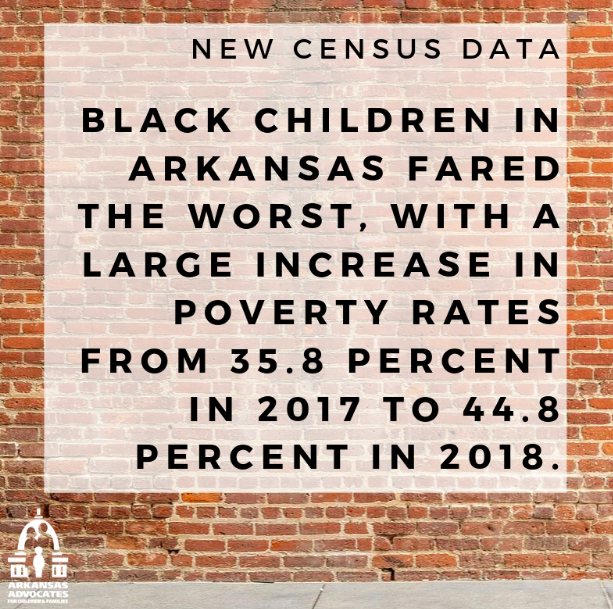 NOT SO ROSY: Census data shines light on plight of poor in Arkansas.

Despite a steady drumbeat of boasts about the state of Arkansas’s economy from Republican politicians, a low unemployment rate doesn’t tell the whole story, says Arkansas Advocates for Children and Families.

Wages and poverty levels remained flat in 2018, says a new report.  The number of people without health insurance grew. The economic security of children declined. The poverty rate for children and black people increased — with almost half the black children in Arkansas living in poverty.

Ginny Monk’s article included a rare dose of candor from a Republican and it came from Sen. Jim Hendren, nephew of Gov. Asa Hutchinson, who’s bridled at having his income tax reduction agenda described (accurately) as a windfall for the wealthy. In addition to giving the Waltons millions, it actually imposed new burdens on the very poor. Noting the income tax hit and the state’s high sales taxes (a disproportionate burden on the poor), Hendren said:

“When you factor all those things together, it became clear that our tax code was putting more of a burden on low- and moderate-income people than other states,”

Yes, that might contribute to income inequality. An earned income tax credit might alleviate it somewhat. Hendren proposed the last legislative session to pay for such a credit with a tobacco tax, but the tobacco lobby beat that. It also could have been done by giving an income tax reduction that wasn’t quite such a windfall for the ultrawealthy, but Republicans would have none of that. (Though it is but a return of taxes paid by working people, not welfare deadbeats.) The majority of the income tax cut ent to the top 2 percent of taxpayers.

Together these data points reflect the policies we have pursued in recent years that have left the needs of hard-working Arkansas families on the back burner. Instead of investing in Pre-K access for all children, we have cut taxes for higher income earners. Instead of investing directly in working families, especially those with children, by creating a state-level Earned Income Tax Credit, we have cut taxes for corporations.

Another data point: Yes, the unemployment rate in Arkansas is holding at a record low around 3.4 percent. But have you ever heard of the U6 unemployment rate, which includes ALL unemployed including “margnally attached” and those employed part-time for economic reasons? That rate according to recent data is about 7.1 percent, roughly in the middle of the states.