With Little Rock Central High and all its grandeur and history serving as a backdrop, more than two thousand people waving electric candles and wearing red (“for ed”) gathered Wednesday to stand united against the state’s plan to divide Little Rock schools and cripple the teachers union. It was a powerful showing.

The bill of speakers reflected the diversity of the opposition to the state plans to return only some of Little Rock School District to local control and end recognition of the Little Rock Education Association, the last teachers union that represents the teachers of a district in collective bargaining in the state. 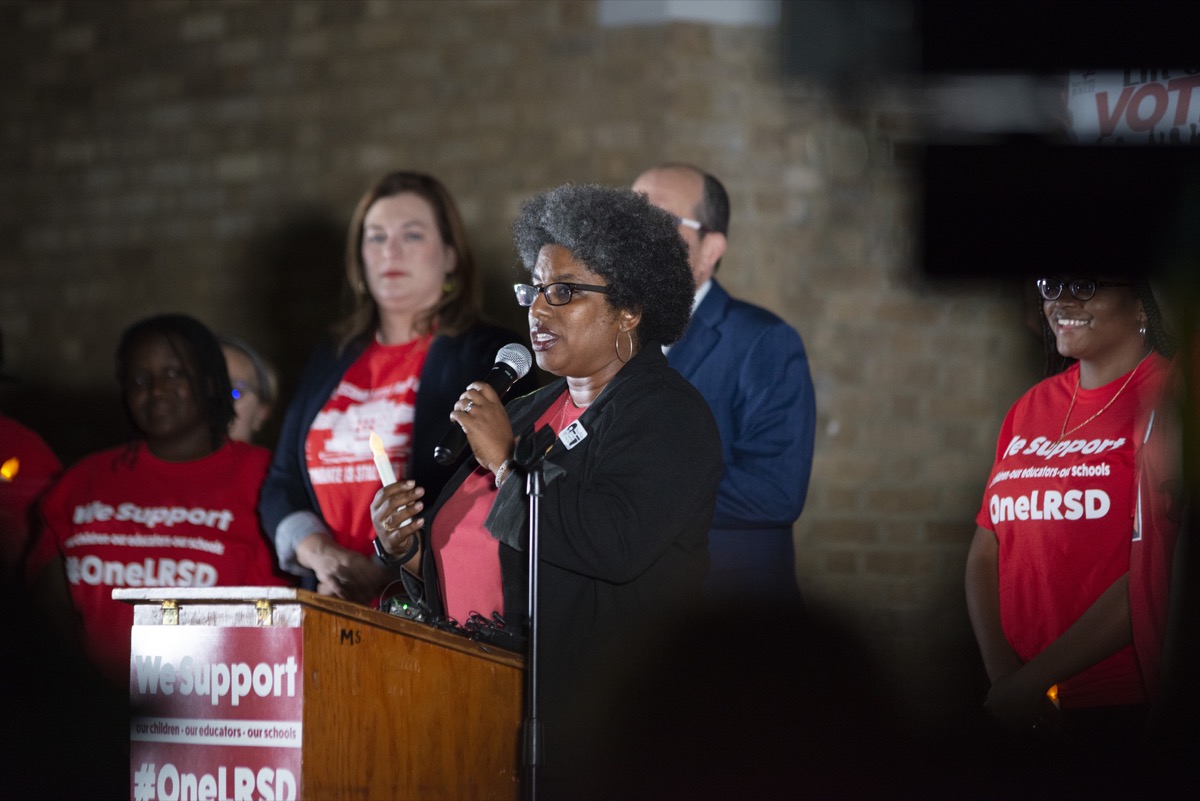 Stacey McAdoo, a Central High School teacher, the 2019 Arkansas Teacher of the Year and a Little Rock Education Association member, echoed some of the sentiments she shared in a powerful recent op-ed in the Arkansas Democrat-Gazette.

“Every single one of us — students, parents and teachers — should feel valued, heard and respected,” she said. “Nothing should be done to us or about us without us. Our voices matter and so do the things we say. We’re not talking about facilities, structural buildings or compiled data. We’re talking about human beings, children… and they are watching. They are dear, sweet, beautiful, brilliant children who deserve our support, our love, endless opportunities — and most of all one district, one locally democratically elected board, and teachers who are respected.”

As Arkansas Teacher of the Year, McAdoo has a nonvoting seat on the State Board of Education. She’s not been afraid to speak her mind or ask pointed questions on LRSD matters in the past. She could be a factor at Thursday’s meeting.

McAdoo said she’d visited a lot of schools as part of her teacher of the year duties. One child asked her to let the governor know that “they are not a failure.” She said that “F” grades for schools do psychological damage.

She ended with an excerpt from one of her poems:

As for me, I teach
And I realize that as I teach I learn
I learn that math equals out when the common denominator is not treating students like a book of problems
I learn that science is hypothesizing the best formula to stay as positive as a proton
…
I have learned that I don’t teach a subject I teach a child. 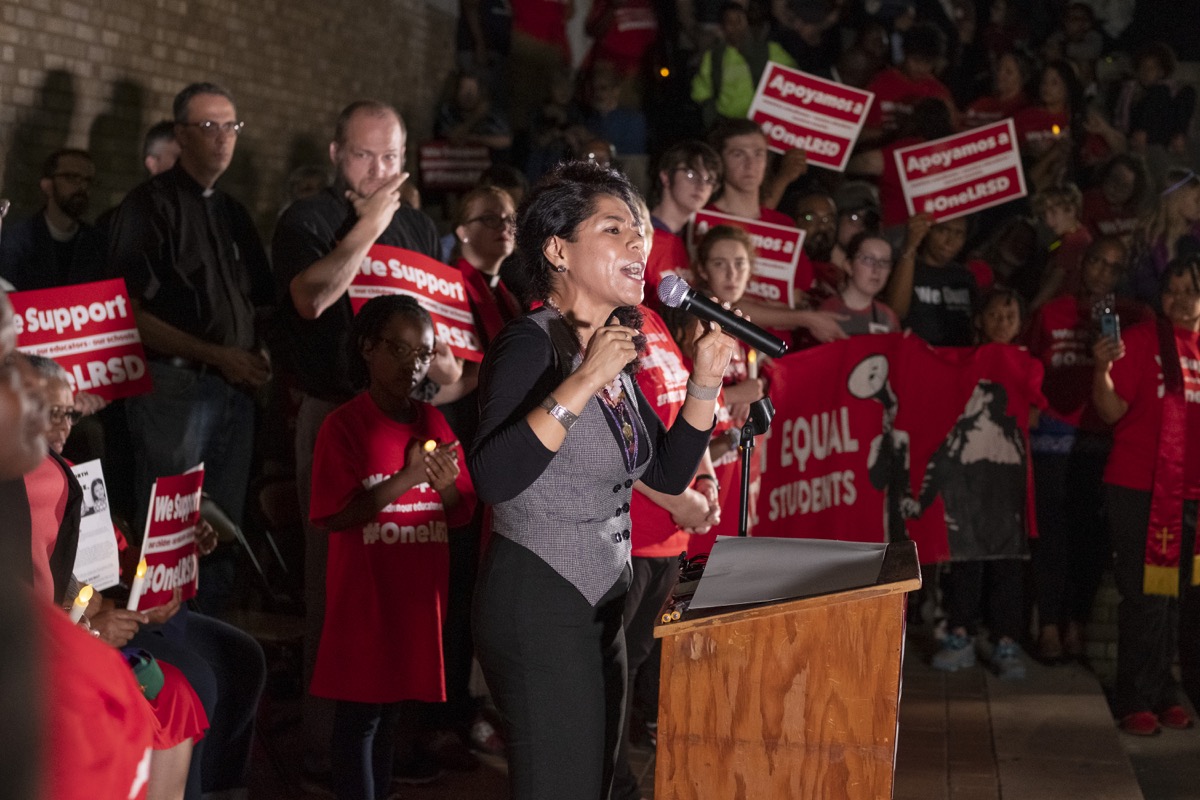 She said she was proud to be a community organizer. “What is going to ensure that every child achieves their potential is continuing to grow the movement,” she said.

Vicki Hatter, a Little Rock parent a community activist, said, “The union is the last standing protection against the privatization of our public education here in Little Rock.”

Ali Noland, another parent and activist, said, “I have lost sleep for several weeks because everything that nine brave teenagers risked for, fought for and achieved is at risk right now. The Little Rock Nine got us this far. In this same space, 62 years ago, people who looked like me hit and kick and spit on children who were trying to get an education. Right now, we are standing shoulder to shoulder fighting for an equitable education for all students. We owe the Little Rock Nine a debt of gratitude.

“I think about what this city could be if we get this right. I think what it would do to our city, our schools and our children if we get this wrong. We have an opportunity right now, not just to shape our public school district, but the values we teach our children.”

Noland said she’d been thinking about how, at the end of her daughter’s 1st grade school year last year, her daughter stood in the parking lot crying and clinging to her teacher because she didn’t want the school year to be over.

“If I don’t stand up and fight for the teachers who are fighting for my kids, what am I teaching my kids?” she asked. 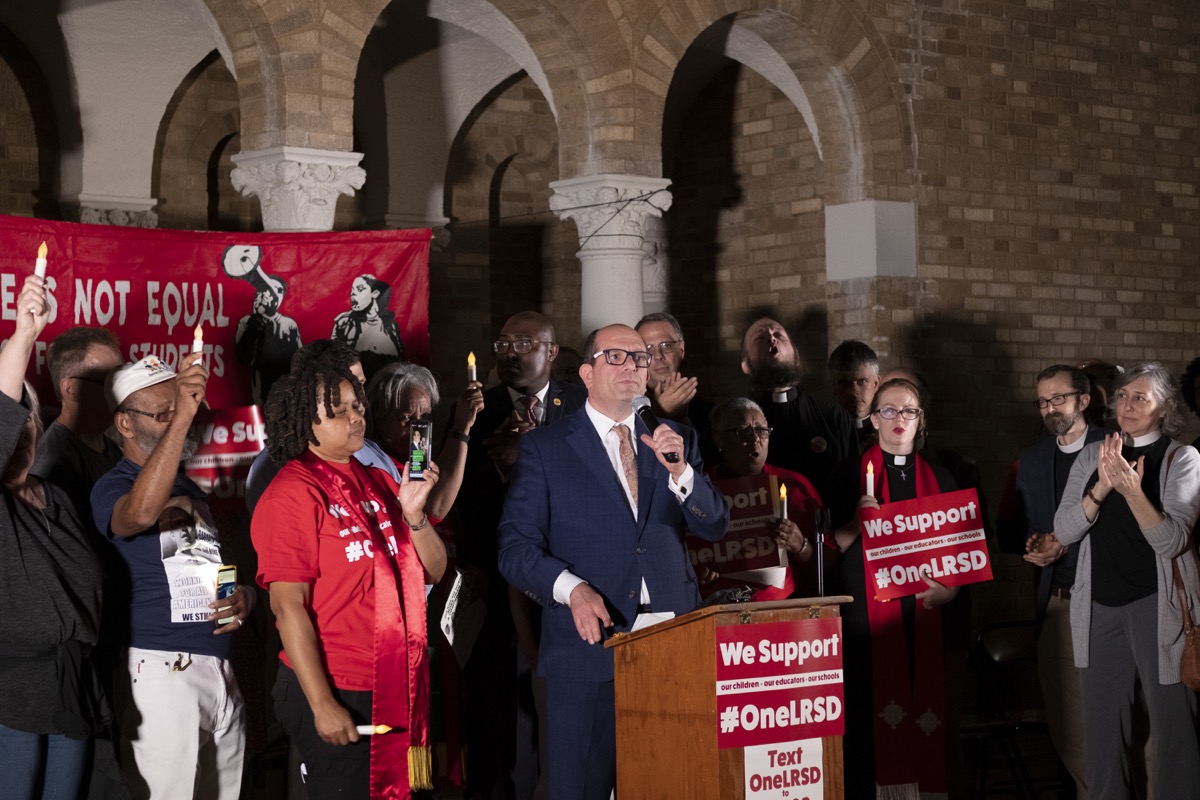 Rabbi Barry Block said he had spent the day in his synagogue fasting and asking for repentance during Yom Kippur. “Today was my day of repentance. Tomorrow is the State Board of Education’s day of repentance!” he said. After he cycled through a number of “sins” the Board had to repent for, the crowd chanted “Repent!” over and over.

Clegg and Block were joined by a number of other faith leaders, including “Rev. Scott,” as Block described Mayor Frank Scott Jr. Neither Scott nor any other politician spoke.

Teresa Gordon, president of the Little Rock Education Association, closed by saying, “Either we accept segregation, or we stand and fight.”

Speakers repeatedly asked the crowd to come to the State Board of Education meeting tomorrow. The meeting begins at 10 a.m., but the LRSD is slated for the agenda for 1 p.m. The State Board meeting room is the world’s smallest auditorium. It can maybe hold 20 people.