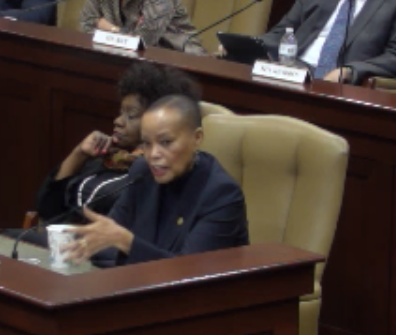 The Legislative Council this morning killed a study of state school finance, a process that could have found the state is falling short of providing enough for an adequate education as the state Constitution requires.

It was a tortured road to this vote today. The Joint Education Committees had voted to hire Denver-based Augenblick, Palaich and Associates for $659,000 to do the study. It’s a longstanding consultant in the field.

But earlier this week, the policy-making subcommittee of the Legislative Council recommended hiring BOTH Augenblick and St. Louis-based Shuls and Associates for $499,236. Shuls is a newly created outfit, but its members include people friendly to the school “choice” movement and presumably less likely to favor more spending on schools. There had been a push to hire Shuls exclusively, which the Education committees didn’t approve. The study was to be completed by the end of 2020.

Sen. Linda Chesterfield moved for Legislative Council approval of the standing committee’s recommendation for Augenblick, despite what the policy committee recommended. Sen. Bob Ballinger made a substitution motion for what he called a compromise to hire two firms, despite the additional cost. The idea is that the conservative legislature might have a path to get a report that doesn’t suggest more funding than is now being provided. For years, most experts think the legislature hasn’t provided sufficient funding as the Lakeview court decision requires, by falling short of increasing spending in step with inflation and needs increases.

Sen. Joyce Elliott said the policy committee recommendation was not a compromise, but an “imposition.” She said the Education Committee met twice, had extensive debate and after all that chose Augenblick. It was referred to the policy committee, whose function is not to change a standing committee’s recommendation but to decide if it is to be funded, she said. She said it was not supposed to make substantive changes.

Said Elliott: “There is something odd about wanting to spend twice the money without rationale.”: She said it wasn’t efficient. She also said Shuls, a new group, had never done this kind of study. “I don’t see how that makes sense.”

Sen. Will Bond agreed with Elliott that the policymaking committee typically just votes a proposal from a standing committee up or down. He said the policy committee had heard nothing about either consultant yet made a recommendation on hiring both of them.

Rep. Bruce Cozart, chair of the House Education Committee, said he wasn’t happy about two consultants, but he said a consultant needed to be hired because adequacy hadn’t been studied in 15 years. He said he didn’t want to risk losing a study by objecting to spending an extra $500,000.

Ballinger argued for Shuls, saying they included experts, such as a member of the education reform faculty from the University of Arkansas. And he said the context of $2 billion worth of annual education spending justifies an investment in a second report that might provide ideas “outside the box.”

Chesterfield said it was egregious for legislators to say “if you don’t do it our way you can’t have an adequacy study at all.”

Elliott noted that whatever a consultant produces is only a recommendation, not required.