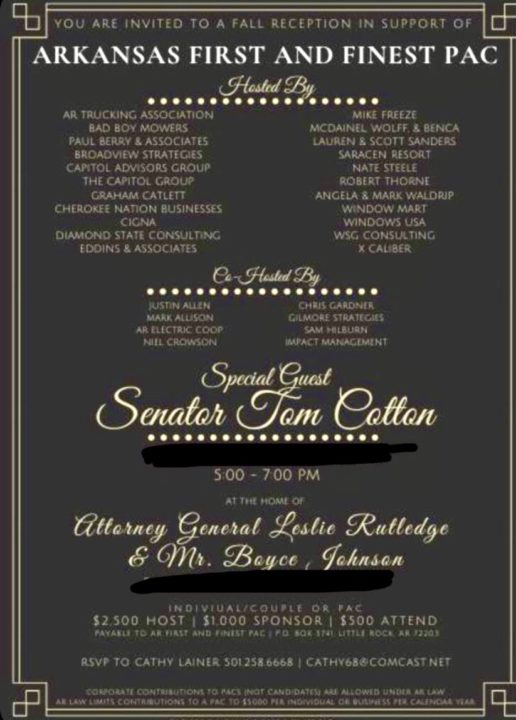 You want bipartisanship? Behold the invitation to a recent fund-raiser to swell the treasury of Attorney General Leslie Rutledge’s PAC — Arkansas’s First and Finest.

Plenty of familiar names there, relying heavily on people and firms who do business with the state of Arkansas, of course.

The hosts, who apparently paid $2,500 for the privilege of a name in lights, included Nate Steele [sic]. Steel is the lawyer and former Democratic legislator who lost a hot race for attorney general against Rutledge in 2014. Also: the McDainel [sic], Wolff and Benca law firm, headed by former Attorney General Dustin McDaniel, who happens to be the Democratic National committeeman from Arkansas.

After McDaniel not only helped Rutledge pay off campaign debt in 2014 and later went publicly to bat for her for a whopping big pay raise in the job he once held, some Democrats grumbled. Apparently not enough to deter a repeat. McDaniel is of course into private enterprise now, including in service to the Cherokee tribe, another host, which is hot on the trail of a casino permit in Pope County.  The colors in that world are not red and blue, but a monochromatic green.

The Quapaw tribe, already in business in a new gambling operation in Pine Bluff, is on the host list, too, along with many other familiar names in the political-industrial complex.

Given that Maddog Republican Tom Cotton was the guest speaker, I hope the Democratic hosts weren’t required to attend as well as tender a check. Unless maybe they wanted to drop off a check for Cotton’s PAC, too.

Rutledge’s most recent PAC report was filed in mid-October, in advance of the haul from this event. She had about $10,000 on hand then and recorded only one contribution in that report — $500 to maddog Repubican Sen. Trent Garner who has a couple of Democratic opponents in 2020 and has never uttered a bipartisan word that I can recall. She’s also doled out money this year to the Arkansas Young Republicans, who appreciate the hand across the aisle from the Democratic committeeman, I’m sure. We’ll check later to see if any of McDaniel’s loot reached a Democratic candidate. I wish the Quapaws would take political wagers at their sports book. I’d have a can’t-lose bet.