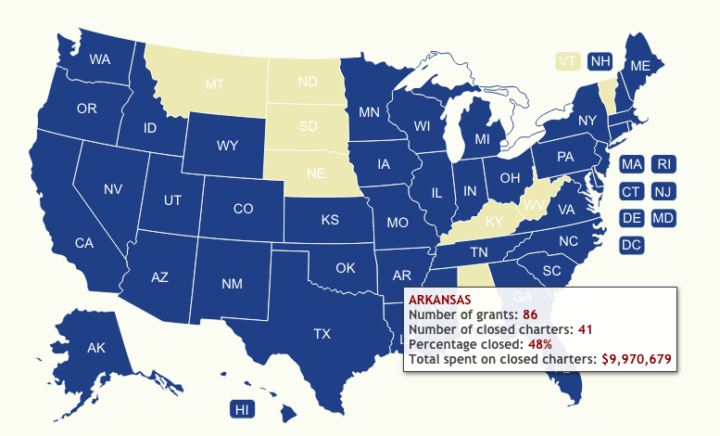 The Washington Post provides a summary of a new report detailing some half-billion dollars in federal money wasted on charter schools that never opened or were shut down, including in Arkansas.

Michigan, home of charter advocate Betsy DeVos, the education secretary, was the biggest money pit according to “Still Asleep at the Wheel” by the Network for Public Education, Diane Ravitch’s advocacy group for public schools.

The study looked at 5,000 schools that received federal Charter School Program money between 2006 and 2014. It follows an earlier report on the waste of nearly $1 billion in federal charter money, a report that led to congressional restrictions on charter school spending. (Aside: If you think the charter spending has been wasteful — and to little educational effect — wait and see what happens if Trump delivers on a promise to provide federal voucher funding to purely private schools. It’s been an enormous boondoggle in Louisiana, with handouts to schools that made education worse for thousands of students.)

More than 35 percent of the charter schools that received federal money never opened or were shut down, the report says. In Arkansas, the percentage was 48 percent, with almost $10 million spent on 41 grant recipients that are now defunct. Accountability? That’s reserved for the Little Rock School District in Arkansas. Forever.

The federal charter program had bipartisan support for years, but recently a growing number of Democrats have pulled back from the movement, citing the fiscal impact on school districts and repeated scandals in the sector. A number of Democratic presidential candidates have expressed concern about the lack of charter accountability in many states, and Sen. Elizabeth Warren (Mass.), who is running for the Democratic presidential nomination, has pledged to end the CSP.

Here are the specific Arkansas findings from the study. Eighteen grant recipients never opened. The listing includes so-called “conversion” charters, operated by conventional school districts but freed of many of the regulations that apply to other public schools. This may have led to at least one error I noted: inclusion of The Academies at Jonesboro High among those not found on the state list of charter schools. It is a conversion charter in a public school district and still in operation, according to the district website. But you’ll see some familiar failures, such as the Covenant Keepers charter in Little Rock that dissolved amid academic and financial failure.