Read this month's issue
Browse the issue archives
Loading…
Advertisement
Home Arkansas Blog The rich in Arkansas cheer the advent of 2020 and a windfall... 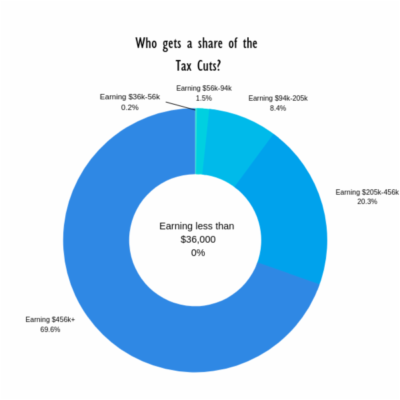 The Arkansas Democrat-Gazette ran down the details today on the beginning in 2020 of Gov. Asa Hutchinson’s whopping  14 percent state income tax cut for the rich over two years. But it lacked a worthwhile sidebar on the major beneficiaries

The top marginal income tax rate for those making more than $80,000 will drop from 6.9 percent to 6.6 percent in 2020 percent and then to 5.9 percent in 2021. Hutchinson hopes for still more. (If he can continue to beggar schools and colleges, privatize prisons, trim Medicaid rolls and otherwise slash state services, the state might be able to afford it.)

The dream that this will spur economic development efforts is a pipe dream. The rich will, as ever, put their money where it gets the best return, be it the Caymans or California, as they always have. (You didn’t see them investing in the Little Rock Tech Park, did you? Tax money paid for that supposed development engine.) In that many of them are heirs to great wealth, many will just pile up still more and maybe buy some fine houses and cars.

Hutchinson will tell you that po’ folks got benefits in two earlier rounds of tax cuts. True, after a fashion. About 1 million got tax cuts averaging pennies. But the tax cut for the rich beginning in 2020 for 1 percent of taxpayers exceeds cumulatively the entire dollar benefits of the two earlier tax cuts.

When discussing the coming windfall and the governor’s announced intention to go even lower, with an ideal top rate of 4 percent (a 33 percent cut in the tax bill after 2021 at a cost of hundreds of millions in lost revenue a year) it’s well to remember the analysis by the Arkansas Advocates for Children and Families of the tax-cutting and the impact on state services.

Overall, Arkansans making more than $94,000 would receive 98 percent of the benefits of this tax cut – leaving the other 4 in 5 Arkansans with essentially no tax relief at all.

More insult to injuries to the poor: As the D-G article noted, this windfall tax cut legislation for the wealthy included some small marginal tax increases down at the bottom end of the income scale, thought state officials claimed other changes would offset those increases. The 2019 legislature also: Put a new tax on gasoline; put a punitive tax on owners of electric-powered cars; increased sales taxes by making sure they would be applied to Internet sales; and asked voters to permanently raise fuel taxes in future years to pay for road construction. It also extended several corporate tax breaks.

All this, advocates said, will make us more competitive with places like Texas, which, Asa and them love to note, has no state income tax. No, it doesn’t. But Texas has enormous severance tax riches, much higher property taxes, a franchise tax that’s equivalent to an income tax for many businesses, and a clawback provision when land taxed at low agricultural tax rates (think Deltic timberland in western Little Rock) is converted into pricey real estate developments. Don’t hold your breath for such law changes in Arkansas, where the legislature is currently raising an enormous howl because assessors are attempting to apply the constitutional requirement for equal taxation by assessing chicken houses at their value rather than a brother-in-law rate.