Two packed school gyms in Des Moines, two moderate candidates near the front of the pack in the Iowa Democratic race. In tenor, however, the two couldn’t be much more different. First up, the cool as a cucumber former South Bend Mayor Pete Buttigieg.

Buttigieg’s Sunday afternoon rally took place at the Home of the Railsplitters — the gym of Lincoln High — and was the crispest event I’ve seen in Iowa. It had just the right number of speakers before the main event and U.S. Rep. Anthony Brown (D-Maryland) and Waterloo, Iowa, Mayor Quentin Hart, both African-American, focused on Buttigieg’s commitment to racial justice and the distinctive training of mayors to be effective leaders. As Hart, a rising star in the party, said, “We need Washington working like our best run cities and towns.”

In his own remarks, Buttigieg covered lots of turf, but did so succinctly. He was certainly critical of President Trump (opening by urging voters to “think about how it’s going to feel to wake up on the first day and see the sun come up over Iowa when Donald Trump isn’t president”). However, he spent more time focused on the change his policies would produce, committing to “leave the politics of the past in the past and lead America to a better future.” Like all candidates, Buttigieg spoke to his electability, arguing that he had an unmatched potential to reach out to independents, “future former Republicans” and voters of faith to create a “powerful American majority” to produce change. He then took questions drawn from a fishbowl in a modified town hall and, again, showed off the depth and breadth of his knowledge and a bit of a human touch in answering the closing question on his favorite Beatles song. “Come Together,” was Buttigieg’s answer, of course.

It was my first time to see Buttigieg in action. Because they share many gifts and because I first saw Barack Obama in an almost identical school gym in Des Moines just before the caucuses (indeed, I had to look back to be sure it wasn’t the same place), it’s natural to compare the two at this stage in their presidential campaigns. They are remarkably similar in their eloquence, in their appeal to the stories of those they’ve met on the campaign trail to emphasize their points, in their focus on a different kind of future grounded in an embrace of “hope” as a guiding principle.  Despite being as crisp as Obama as a speaker, Buttigieg lacks a bit of Obama’s lyricism and, more important, his supporters lack the same energetic passion that the more youthful movement created by Obama in 2007-08 had. That said, Buttigieg is very good as a candidate.  He is cool — indeed, a Washington Post piece by Ben Terris over the weekend describes Buttigieg as downright emotionless — but it’s important to note that Obama was also accused of being a little too cool in the early stages of his career. The tears that Obama shed in response to gun violence and similar events came much later in his public life. Moreover, speaking from my own experience, I think the Terris piece underplays the importance of Buttigieg’s sexuality (Buttigieg wasn’t out until into his 30s) in both buttoning up emotionally and in feeling a need to run away from stereotyping about gay men being overly emotional.

It’s doubtful whether Buttigieg can pull off a victory on Monday night.  He has a chance because of his strength in areas of the state that will likely give him extra delegates. If he fails to get a win out of either Iowa or New Hampshire, it’s likely he will not be able to justify continuing his campaign. 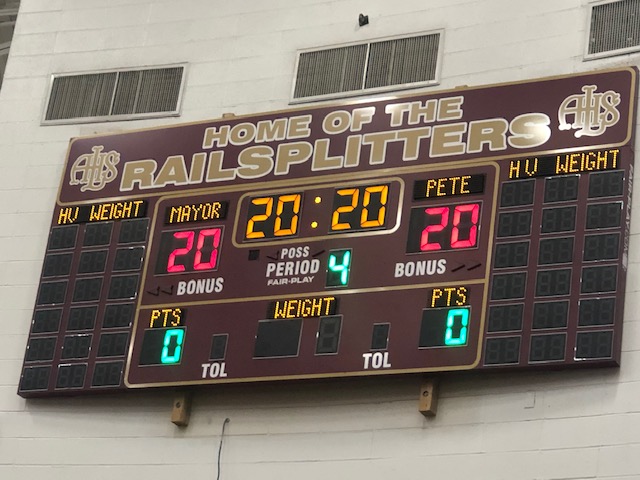 But, there’s little doubt he is a distinctly talented political leader who has run a very good campaign here.

Finally, a local note: Buttigieg college friend Clarke Tucker is in town with his wife, Toni, along with a large group of other Harvard classmates to campaign for their friend in the closing days of the caucuses.