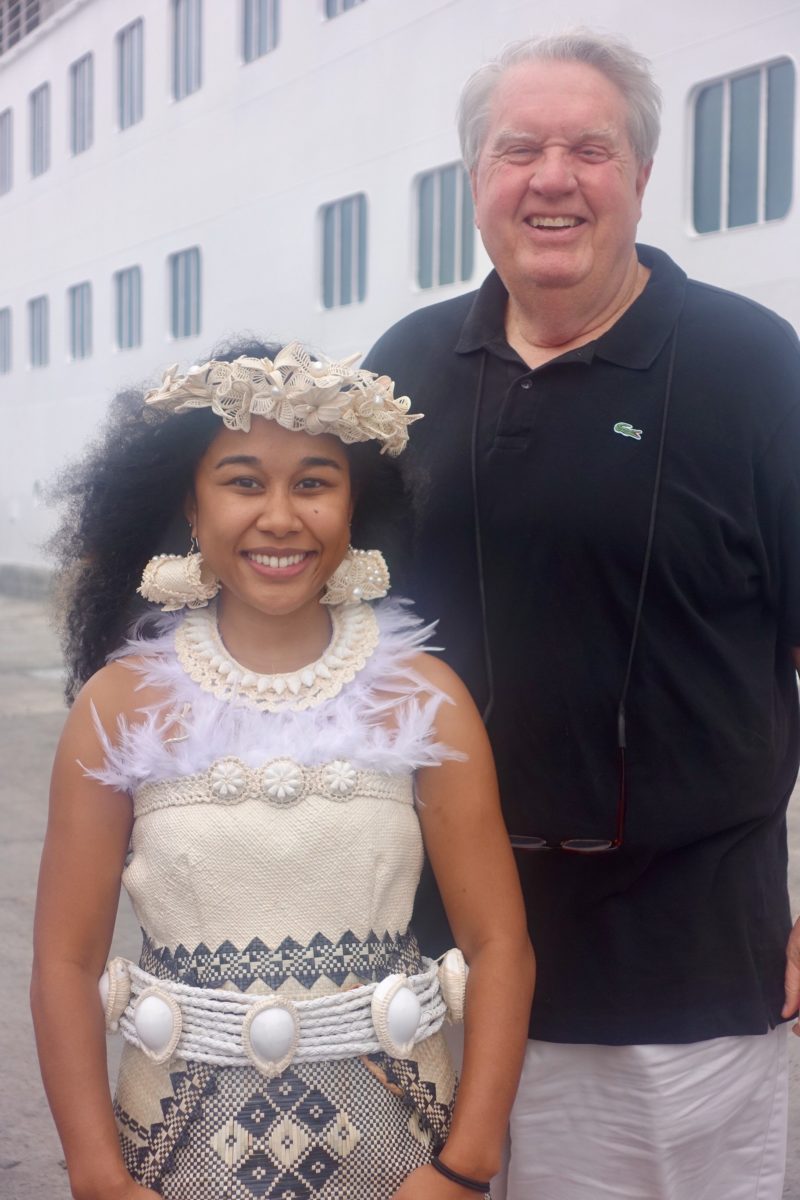 IN THE MARSHALL ISLANDS: With Billma, Miss Marshall Islands.

Max here following a weird cruise to Asia in the time of coronavirus. I noted Blog readers’ complaints about a lack of open lines during my absence and I jump in here a day early, still in jet-lag fog, to post one.

We embarked from San Diego about a month ago for a trip that was to wend through Pacific for an ending 30 days later in Hong Kong. Stops in Hawaii, the Marshall Islands and Micronesia were uneventful. Rough seas forced us to bypass Saipan.

But along about Guam, we received word that the cruise line had canceled the Hong Kong stop — my terminal stop — because of the spread of coronavirus. We would stop in Taiwan instead. That meant making new travel arrangements home (we had air tickets from Hong Kong.) We decided to get off the boat early, at its last scheduled stop before Taiwan, a Vietnamese port near Hanoi. We booked a flight from Hanoi.

But trouble began mounting. The Philippine government wouldn’t allow our ship a scheduled stop in Manila though its immigration officials had done on-board health checks of all passengers and crew. We had no virus on board, but we had added passengers who’d joined the ship in Guam after transiting Hong Kong. That apparently made us suspect. We were allowed to take on fuel in the Manila harbor and another vessel delivered 32 pallets of food and drink airlifted from the U.S. to restock deplenished stores.

Then the Taiwan stop was canceled.

Then the Hanoi port stop was canceled as well as a Da Nang stop, where the port had banned other cruise ships.

We stuck with our Hanoi plane ticket, planning to buy tickets from a newly planned stop in Saigon (Ho Chi Minh City). We’d fly Vietnam Air to Hanoi to link up with the flight we’d scheduled to go home.

Then all Vietnam stops were scrapped and we were informed that we’d end the cruise in Singapore, beset by more coronavirus cases than Hong Kong. It has refused (and continues to refuse) entry to some cruise lines, but ours (Crystal) struck a deal, helped by a lack of illness on our ship. For the week leading up to the Singapore landing, we had temperatures taken twice a day and responded to health questionnaires. Those with any ailments got a further review by medical staff.

We then held our breath. And Singapore did allow us to dock for three days. We left the ship at the first opportunity for a flight to Tokyo and then home, a journey of 42 hours thanks to a long layover in Tokyo. We had some fear of being unwelcome in Japan, but passed thermal screening at the airport and here we are.

The further travels of our cruise ship are in flux. We watched with alarm at the ghost ship travails of Holland America’s Westerdam, finally allowed to dock in Cambodia, and the awful situation of the ship quarantined off Japan. The U.S. government now plans to airlift U.S. citizen passengers to return to quarantine on U.S. soil.

So I feel very lucky. We suffered only inconvenience (and expensive air tickets to replace ones we’d gotten free with air miles.) We weren’t confined to the cabin and the food and drinks were plentiful. Rising anxiety took a little fun out of the martinis and 12 consecutive days at sea begin to pall, even with plenty of cocktail piano players, a great band, singers, dancers, lecturers and a friendly, hard-working crew. They were suffering the same anxiety, particularly many Filipinos who’d hoped to welcome family in Manila.

But our situation was a cakewalk compared with others. I was able to walk miles on the deck, a pleasure denied the Princess passengers floating off Yokohama.

Economic consequences are real. Our ship, which carries about 900 passengers, expected to have maybe a third of that number or less for the continuation of the cruise and its uncertain itinerary. It is but the tiniest part of the broad consequences of the virus after hundreds of deaths and thousands of illnesses.

For the future: We are scheduled to take a ship around Japan in April. I’d have to mark it with a question mark today.

Our cruise line is essentially comping our cruise. We can take another cruise of our choice for no charge up to the amount paid for the Guam-Hong Kong portion. Whether the line or travel insurance will handle added air costs and the cost of pre-paid shore tours we arranged is a question yet to be resolved.

By the time we reached Japan, more people were wearing face masks than not. Hand sanitizers were ubiquitous in public places. It’s hard not to join the panic. I instinctively shook the hand of a car service driver who extended his hand in Singapore and then regretted it. And then I regretted feeling that way.

About the photo: We did make a stop in the Marshall Islands, where our ship was greeted by Miss Marshall Islands. She has many friends in Northwest Arkansas, as all the friendly people I met there had. My taxi driver was a U.S. Army veteran who did two combat tours in Afghanistan. While driving in Majuro, he honked and waved at his sister, driving his father’s car. She’d just flown in the day before from Springdale.