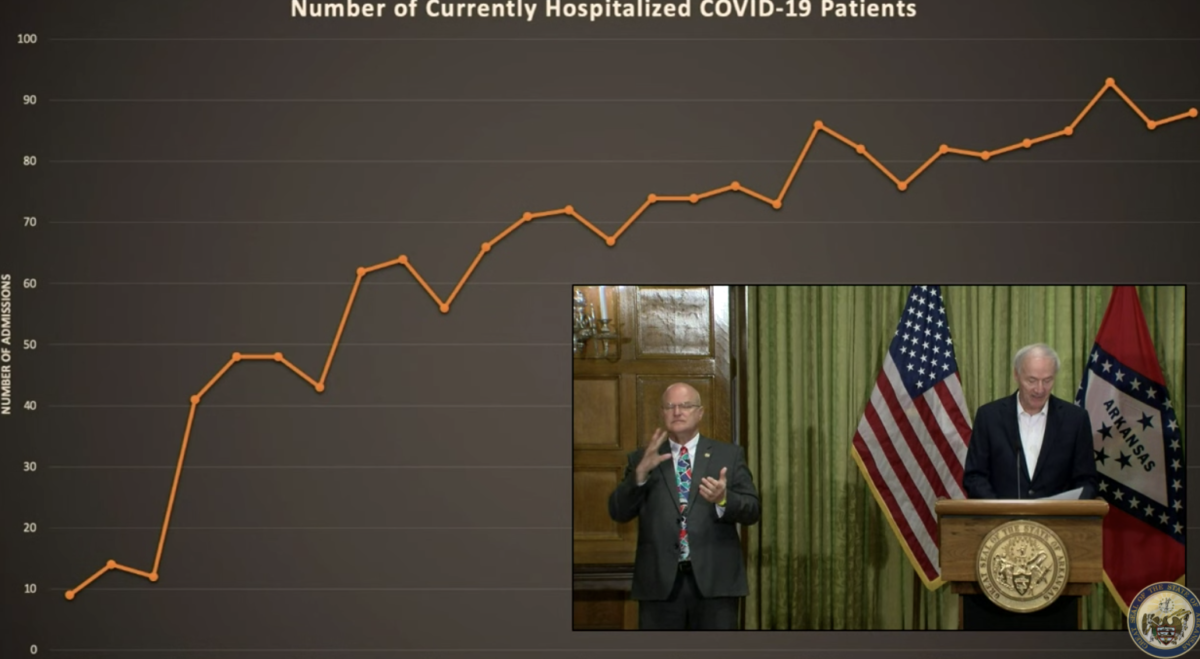 HOSPITALIZATIONS: The chart today doesn’t include a small increase in the most recent count. The governor depicts it as flattening, but overall it reflects a general upward trend, though short of some early projections.

Gov. Asa Hutchinson revealed more details today of a massive coronavirus outbreak in the Cummins prison and said the circumstances have led him to review the records of nearly 2,000 state prisoners for potential early release.

The governor said the state has now tested 1,400 inmates in the 15 barracks at the Cummins unit, almost 1,000 in the last two days. Of the 634 tests completed so far, 348 have tested positive, with more results to come. “It dwarfs what we’re having statewide,” he said. He called that a “reason” not to include the number from the prisons in the overall state total. He didn’t explain further. Are prisoners not people? Are the people who care for them and circulate in the free world not also a part of the whole state picture? He wasn’t asked these questions and didn’t volunteer further information. It remains unclear how many of the positives are included. At least a few dozens were included in the early going, because they explained a one-day jump in the total several days ago. But the last three days of testing seems to be not included based on remarks Saturday and today.

Six Cummins staff members have now been tested positive, Health Director Nate Smith announced. Corrections Director Dexter Payne said the six work outside the barracks and cells. He said 16 staff members had been tested, mostly by their own physicians.

The state’s overall case count today was put at 1,781, up 42 from 1,739 yesterday, but it’s of limited meaning without the inclusion of the prison numbers. I’m also unclear whether the state total includes more than 100 cases combined from outbreaks in prisoners and staff at a federal prison in Forrest City and a community corrections center in Little Rock. The official state death count rose from 38 to 40, but that number also may not be representative of all virus-related deaths. The state continues to refuse to provide information on the overall death rate this year versus past patterns. In other places, death tolls have been re-evaluated because of the many undiagnosed deaths of people who weren’t hospitalized.

Hospitalizations for coronavirus have risen from 86 to 88, continuing a small but steady overall rise. It’s another number that doesn’t appear to include prisons. Smith said 237 health workers have been infected and there’s been one death, a Jefferson Regional Medical Center worker infected in the initial outbreak in the state. 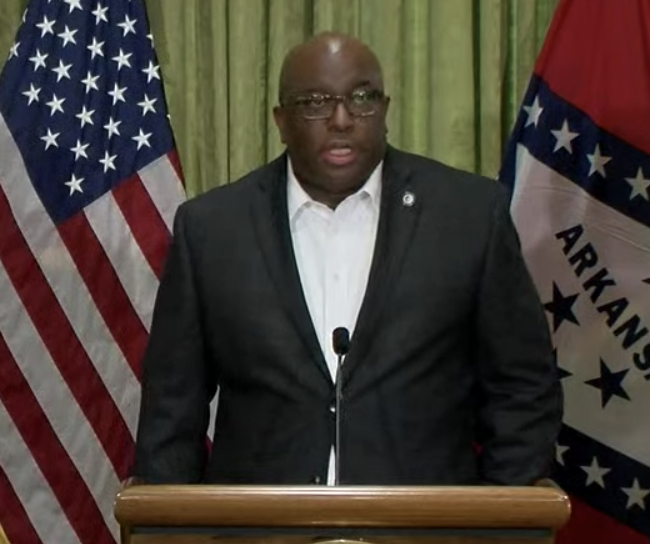 Corrections Director Dexter Payne said the prisons were following guidelines in isolating inmates in eight of the 15 barracks at Cummins. Most are without symptoms. Three are hospitalized.

Hutchinson himself brought up questions about “compassionate release” and made clear, again, that he’s reluctant to do this at Cummins, because of the severity of the convictions. “The inmates are there for a reason,” he said.

But he said the state Parole Board had moved in recent weeks to reduce the population of state prisons in county jails by releasing 271 held there for 90-day sentences for parole violations. Payne said some medical cases at Cummins might qualify for early release. He also said some prisoners recently denied parole might get another review.

The bigger potential news was Hutchinson’s announcement that he has asked for a review in other prisons of non-violent, non-sex-offenders due for release in the next six months. They’ll be screened “from a public safety standpoint” and the Parole Board and Corrections Department will determine how many can be released. There are 1,990 prisoners with this status, he said

“We want to look at prisons more broadly,” he said. If there’s an outbreak in another prison, he said the state wants to have the available space to isolate the infected and to do contact tracing.

There’s been scant testing in other prisons so far.