40/29 reports the arrest of Simon Ang, a long-time University of Arkansas engineering professor, on a wire fraud charge.

Details won’t be released until a bond hearing this afternoon. UPDATE: The charge related to covering up dealings with Chinese government

The UA has acknowledged its awareness of the arrest Friday of Ang, who’s taught at UA since 1988 and is director of the High Density Electronics Center in the Department of Electrical Engineering. He is a 1980 UA grad.

Acting United States Attorney for the Western District of Arkansas David Clay Fowlkes, Assistant Attorney General for National Security John C. Demers, and FBI Special Agent in Charge Diane Upchurch of the FBI Little Rock Field Office, announced today that Simon Saw-Teong Ang, 63, of Fayetteville, Arkansas, was arrested on Friday, May 8, 2020 on charges related to Wire Fraud. The complaint and complaint affidavit were unsealed this evening after Ang’s initial appearance in court before The Honorable Timothy L. Brooks at the United States District Court in Fayetteville.

In the one-count complaint, Ang was charged with one count of Wire Fraud.  The complaint charges that Ang had close ties with the Chinese government and Chinese companies, and failed to disclose those ties when required to do so in order to receive grant money from NASA.  These materially false representations to NASA and the University of Arkansas resulted in numerous wires to be sent and received that facilitated Ang’sscheme to defraud.

If convicted, Ang faces a statutory maximum punishment of 20 years in prison. If convicted, Ang’ssentence will be determined by the court after review of factors unique to this case, including Ang’s prior criminal record (if any), Ang’s role in the offense and the characteristics of the violations.

Here’s the full complaint against Ang.

The charge explains how the investigation began when a library staffer discovered an e-mail between Ang and a Chinese researcher that revealed outside contacts. 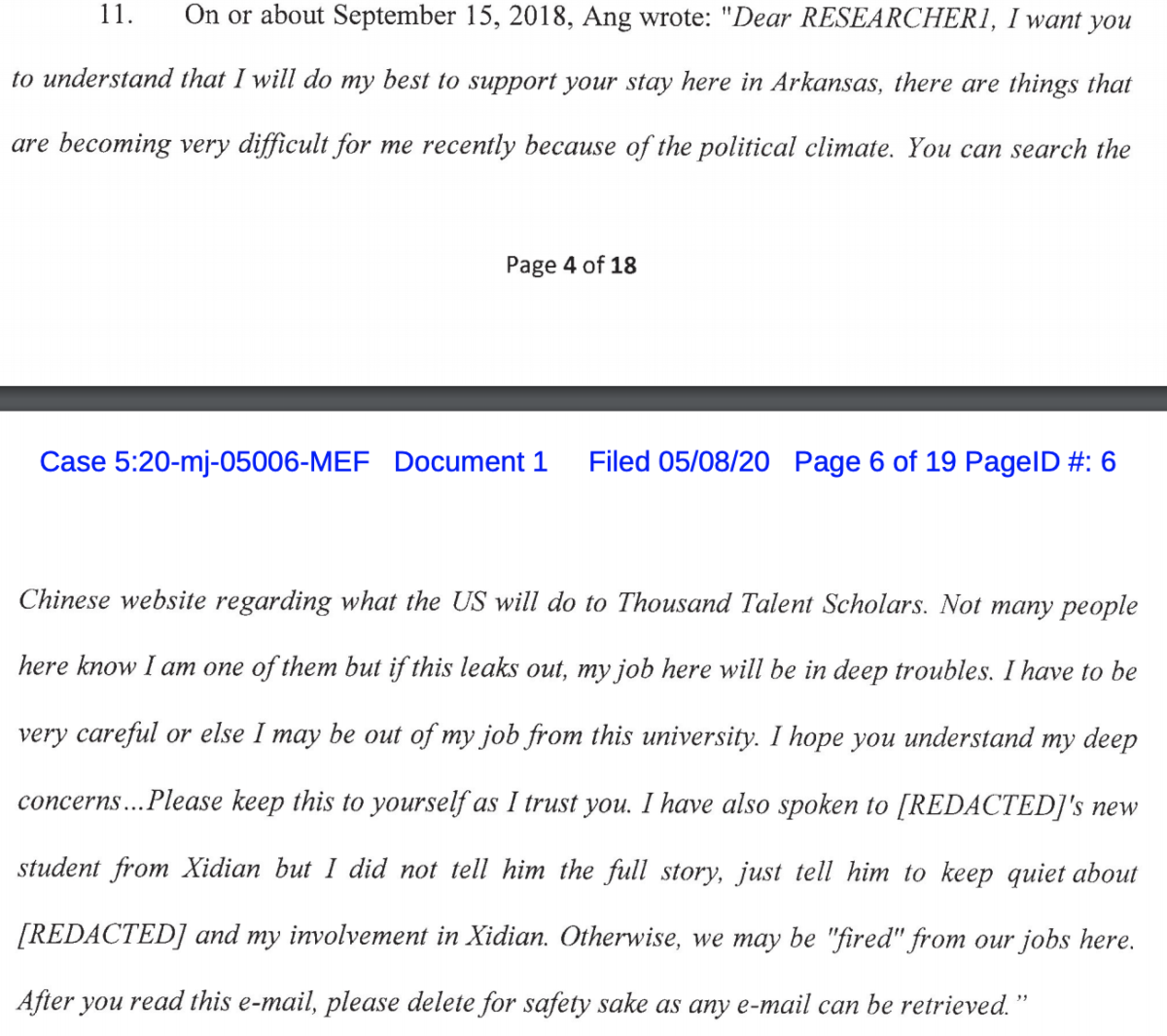 The charge continues to describe how talent recruitment is part of a Chinese government effort to improve civilian and military programs. Ang disclosed some, but not all, of his work in seeking Chinese scholars. It says he should have disclosed potential conflicts from outside contacts with UA, particularly with Chinese companies.

In sum, the charge concluded: