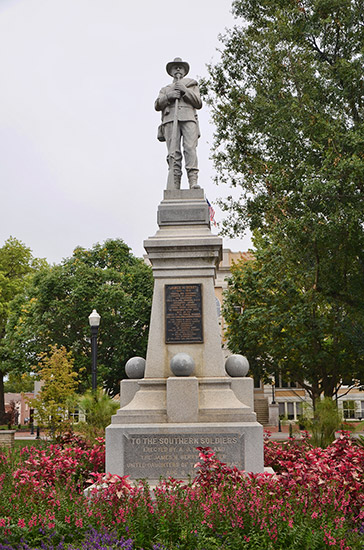 MOVING: The Confederate memorial on the Bentonville square.

Big symbolic news from 40/29: The Confederate statue that has long stood in the town square in Bentonville is to be moved.

The Confederate Monument in the Bentonville Square will be moved in August, according to attorney Joey McCutchen.

The monument will be moved to a private park near the Bentonville Cemetery where Gov. James H. Berry is buried.

The Benton County Historical Society will own and operate the park, while the United Daughters of the Confederacy will continue to own the monument.

As the Encyclopedia of Arkansas writes, the James H. Berry chapter UDC put up the statue in 1908, part of a successful national effort (at least in Southern states) to glorify the Lost Cause.

A. J. Bates, a Bentonville banker, donated $1,000 of the $2,500 monument cost, and James H. Berry—a former Confederate soldier, Arkansas governor, and U.S. senator, as well as the man for whom the UDC chapter was named—donated $1,500.

The statue, which was vandalized last year, has always carried a touch of irony, in that Benton County was in the Union-supporting part of Arkansas. It has continued to be a source of controversy, including as the scene of a small George Floyd protest last weekend.

McCutchen is the Fort Smith lawyer who fought doggedly and unsuccessfully to maintain the Rebel mascot and all their Lost Cause trappings as emblems of Fort Smith Southside High School.

The revived Bentonville downtown, with trendy restaurants and hotels and nearby art institutions, has flowered thanks to money from the Walton family who became billionaires thanks to Walmart, the corporation headquartered in Bentonville (it has a museum across the street from the statue). The 40/29 article doesn’t mention any potential Walmart/Walton role in the removal of the statue, but one wonders.

You think we could get whoever is financing this to make room for the ones that sit on the Capitol grounds?