Read this month's issue
Browse the issue archives
Loading…
Advertisement
Home Arkansas Blog Tom Cotton calls for the jackboots; so does Trump. And what did...

If local law enforcement is overwhelmed and needs backup, let’s see how tough these Antifa terrorists are when they’re facing off with the 101st Airborne Division.

We need to have zero tolerance for this destruction.

Of course Tom Cotton won’t consider for a second that it was the police who turned violent, not the hundreds of thousands of peaceful demonstrators.

Of course, he might not consider a rational, intelligent approach to examining the sources of violent acts. Might there even be some neo-Nazis in the mix?

And how will you separate the bad actors from the good?

And, if necessary, the 10th Mountain, 82nd Airborne, 1st Cav, 3rd Infantry—whatever it takes to restore order. No quarter for insurrectionists, anarchists, rioters, and looters. https://t.co/OnNJmnDrYM

And then he got even worse.

We should have zero tolerance for anarchy, rioting, and looting.

If necessary, the president should use the Insurrection Act to deploy active-duty military forces to these cities to support our local law enforcement and ensure this violence ends tonight.

Not one more night. pic.twitter.com/a41ExMrgIZ

He’s getting some blowback. For example:

how about these guys pic.twitter.com/zhrd39fVKv

And even here at home.

There is NO property worth the taking of a human life.
Period.
This is advocacy for execution without trial for committing a property crime. pic.twitter.com/2XuMKGvIkD

A “no quarter” order is a war crime.
No quarter in a military action against US citizens is not only unconstitutional, it’s prosecutable under Geneva Convention. @SenTomCotton, PLEASE retract this statement and apologize.
This Trumpian authoritarian Tom isn’t the guy I knew.

But wait. A reader is old enough to remember when Tom Cotton CHEERED police violence. See, some people have freedom and some don’t in Cotton World. 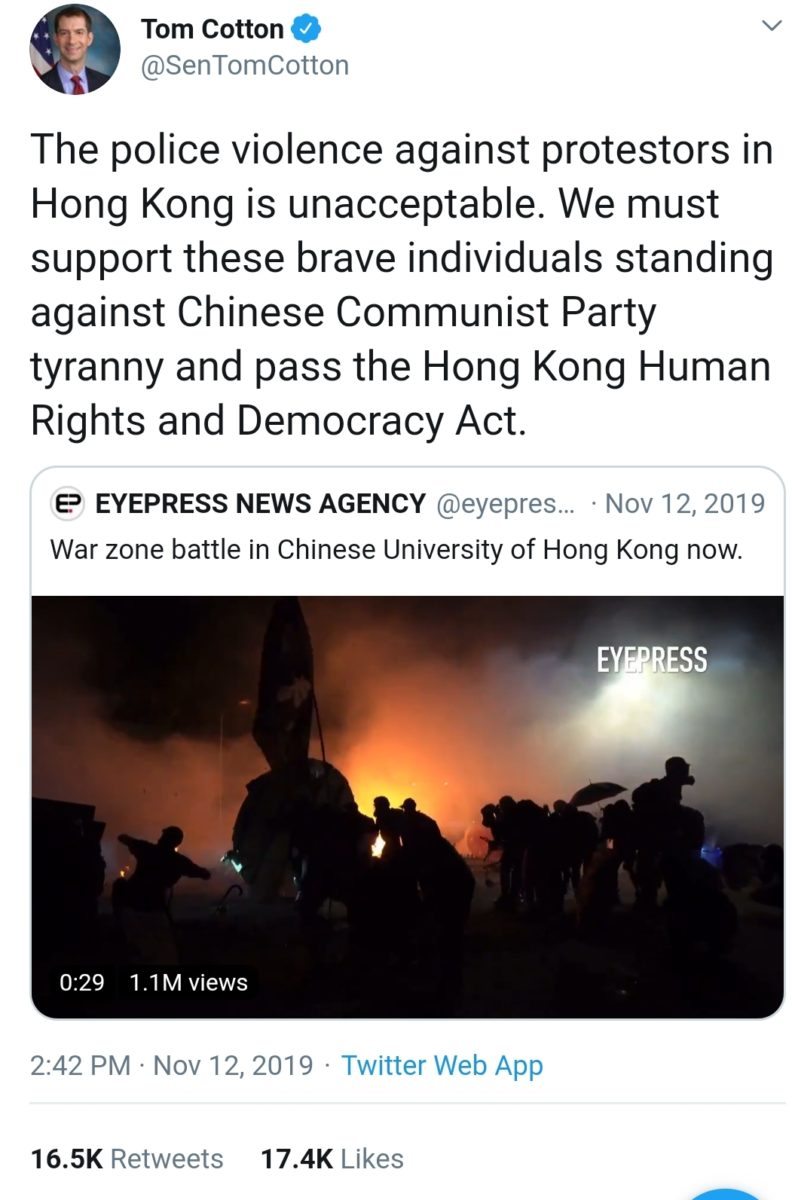 But then there’s this, to show you where Tom Cotton is coming from. Or vice versa, perhaps.

Amid nationwide protests over police killings of black people, President Trump tells governors that “Most of you are weak,” and urges tougher crackdown on violence. https://t.co/FeTwnejurY

And was Gov. Asa Hutchinson on this call? Even if not, he can be asked in Rogers today what he makes of this.

I’m in touch with someone who’s on the governors’ call with President Trump right now. They and others listening in are alarmed. The president is urging governors to take back the streets, not be “weak,” and use force as the nation faces growing racial unrest.

Trump to governors: “Someone throwing a rock is like shooting a gun. You have to do retribution. You have to use your legal system. If you want this to stop, you have to prosecute people.” https://t.co/aoo42bXY8p

UPDATE: Hutchinson will fly back to Little Rock after his 1 p.m. coronavirus updated in Rogers to hold a 4 p.m. news conference at his office on the demonstrations.

A flag-burning law will fix this, Trump reportedly told governors. Really. How about some meaningful anti-brutality legislation, including the end for near blanket immunity for police use of force.

Also, a reminder of when we had a real president.

I wrote out some thoughts on how to make this moment a real turning point to bring about real change––and pulled together some resources to help young activists sustain the momentum by channeling their energy into concrete action. https://t.co/jEczrOeFdv