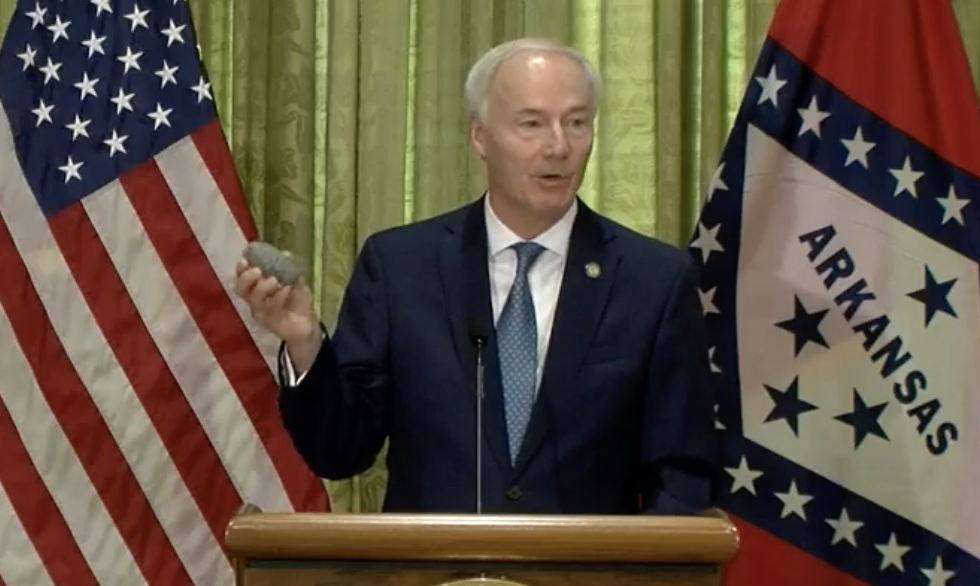 ‘THIS IS A ROCK’: Gov. Hutchinson displayed a rock thrown at a state trooper as one of the triggers of arrests.

Hutchinson displayed a rock that was thrown at officers. “This is a rock. It was used as a weapon against law officers. It is not a pebble you skip across a creek. It is a weapon” He didn’t say if it struck an officer, but Bryant said later that a trooper was hit in the head by the rock and picked it up. 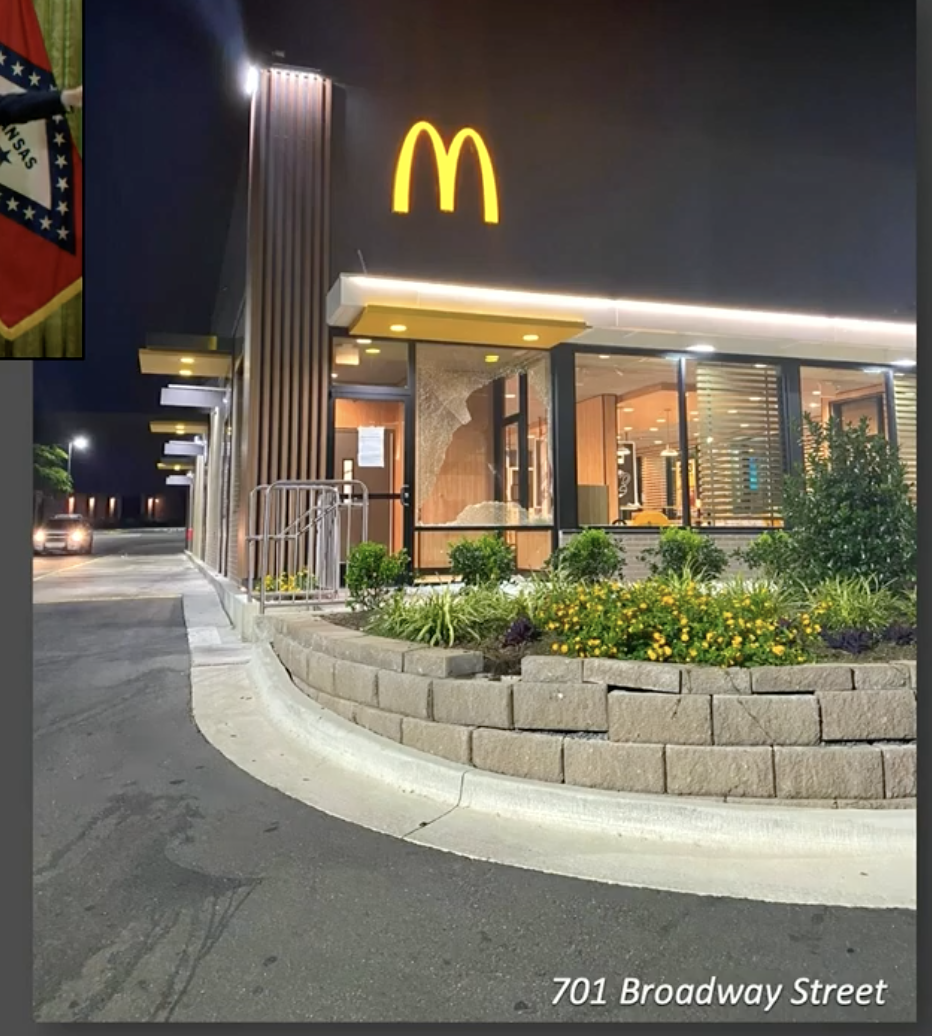 The governor also displayed a photo of a broken window in the McDonald’s at Seventh and Broadway. A landscaping stone was thrown the window. 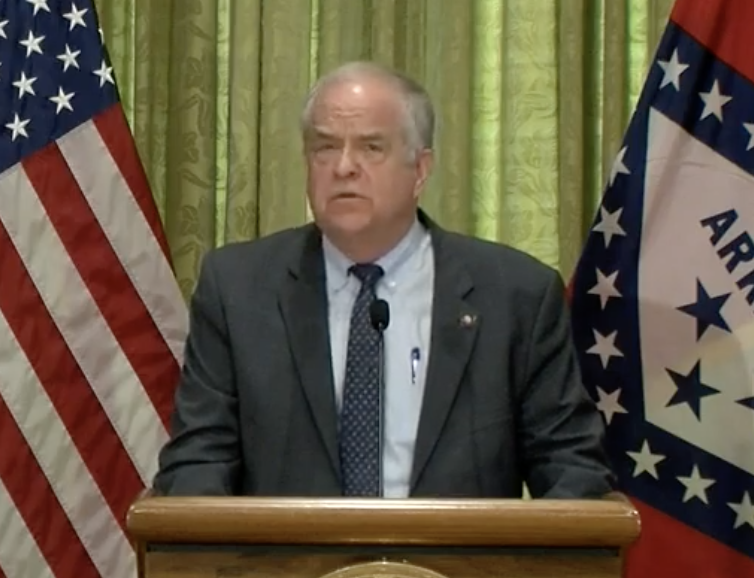 Bill Bryant, director of the State Police, said that was the “triggering event” that led to 78 arrests, including two people in possession of Glock pistols. He said State Police also saw Facebook live messages that were urging remaining protestors to confront police.

He said it was chaotic when arrests began. But he said officers have to do all they can to protect officers.

Bryant provided a recap of State Police work the last four nights, defending the use of chemicals to disperse crowds in response to a variety of violent actions. He said one person in the crowd fired four shots from a pistol. 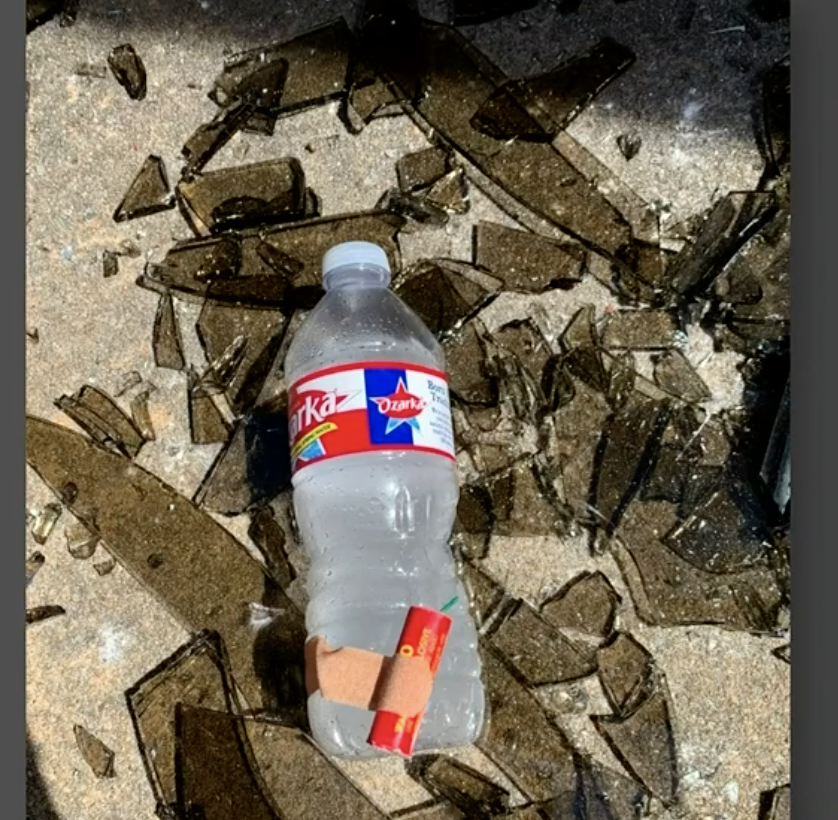 ‘MOLOTOV COCKTAIL’: It was found at the scene, but not linked to a specific demonstrator.

He also displayed items that had been found — bricks hidden near the Capitol, a garden sprayer filled with gasoline, a plastic bottle filled with alcohol and a firecracker attacked (a Molotov cocktail of sorts).

The governor also continued to insist that out-of-state elements were fueling violence, though there have been no out-of-state arrests.

“The intelligence is that out of state influencers are here, that they’re helping to coordinate and they’re helping to motivate the violent elements. They have a means of getting other people arrested but not themselves. They encouraged the behavior.”

No one disagrees that there are some troublemakers in the crowd, heavily outnumbered. This is a good place, I think, to insert some notes from photographer Brian Chilson, who observed most of Tuesday night’s demonstration. I think you’ll find them interesting.

The governor and Bryant repeated their earlier statements of a belief in protest, concern about the death of George Floyd,

Bryant was questioned about State Police stopping a Children’s Hospital worker for violating curfew and the need to have a security guard attest to the person’s legitimacy. Bryant said it wouldn’t be standard practice to stop everyone in public after curfew.

Hutchinson didn’t comment at length when asked about detention of three journalists Tuesday night. He said they should be allowed to work and were released.

The curfew continues and the governor said he intended to continue his emergency order on “unified command” of police agencies “as soon as there’s not any risk to property and people.”

Bryant and Hutchinson noted that demonstrators had not been arrested for violating curfew, including when they stopped at the Governor’s Mansion. He said police had tried to encourage compliance and avoid confrontation. But he said when unlawful acts occurred, officers had to respond.

Bryant said demonstrators had been given plenty of notice to disperse on previous nights and officers had tried to win compliance. “But when they start charging, throwing rocks, pouring beer on officers, we have to take action. But won’t use excessive force.”

He said last night had mostly been peaceful and police will protect future peaceful demonstrators.

Hutchinson characterized his emergency order yesterday evening as routine when the National Guard is activated and has done before. I’ve asked the governor’s office for examples of activations of the Guard in a peacekeeping role.

He also insisted there was a line of authority that respected local agencies’ jurisdiction. But he also made clear he acted because of violence that had occurred off Capitol grounds. The order also allows the governor to usurp local control as he deems necessary.

He said nine police agencies and the National Guard worked Tuesday night. “We work together,” he said.