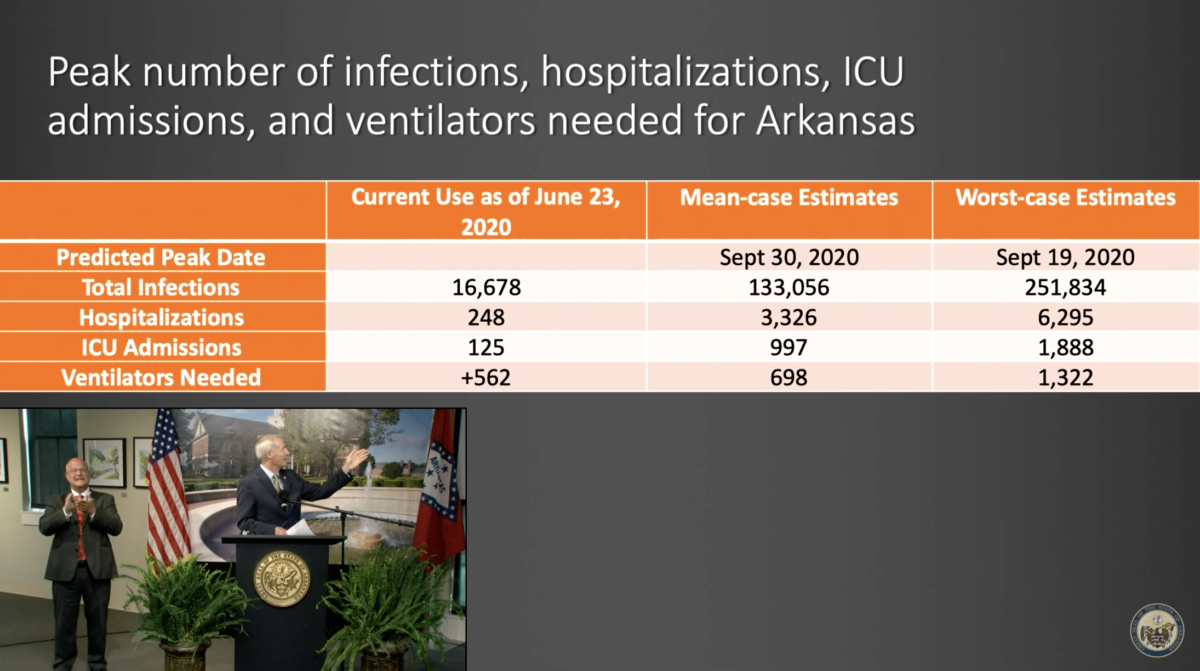 PROJECTIONS: The current demand on health facilities and the projection of what they’d be if a projected rise in COVID-19 cases proves accurate.

MOUNTAIN HOME — Gov. Asa Hutchinson’s traveling briefing on coronavirus stopped here today, a part of the state with a relatively low COVID-19 case count. The overall news was more of the same: a rise in new cases, deaths and hospitalizations.

212 of the new cases were from prisons and jails, particularly in Benton County Jail (201 prisoners and staff) and the Ouachita River prison (128). Today, the governor illustrated active cases without including prison cases, an inhumane and misleading view because prison workers travel in the community. Counting all human beings, there are 5,223 active cases.

Hutchinson said increased testing would continue to be a key part of the state’s response to the virus, though Donald Trump is discouraging it and rolling back federal testing support in some states. The positive rate is still running near 7 percent every day.

Hutchinson addressed the UAMS projection of peak cases at the end of September and early October. He said he still hoped to change the projected growth rate. How? Massive amounts of testing, contact tracing and isolation, all of which can break up chains of transmission.

He again urged discipline in social discipline and breaking lifelong habits. “Everybody has a part to play,” he said. But, no, he won’t impose requirements. He’ll just encourage.

Health Director Nate Smith said the spread of the virus is “very concerning.” But he, too, said proper practices can limit the spread.

Will local school districts make decisions on school operation or will the state control? Hutchinson said there will be flexibility — such as closure because of an outbreak. “We want school to happen,” he said. On-site instruction is the preferred standard, but with adaptations for the virus.

Given the sharp rise in cases since Memorial Day, is there a fear of the same following July 4? “You can see an increase in cases,” if people get together without social distancing, Hutchinson said. “You have to be smart through that holiday,”

Hutchinson said he’d sign a hate crimes bill if the legislature approves one along the lines he’s supported. It would enhance penalties for hate crimes. The question is what categories would be covered by such legislation. Historically, for example, the Republican legislature has resisted protecting sexual minorities.

He refused to say Arkansas should stop doing business with China on the strength of the indication that the disease arose there. “You don’t want to isolate the United States from the second-leading economy in the world.”