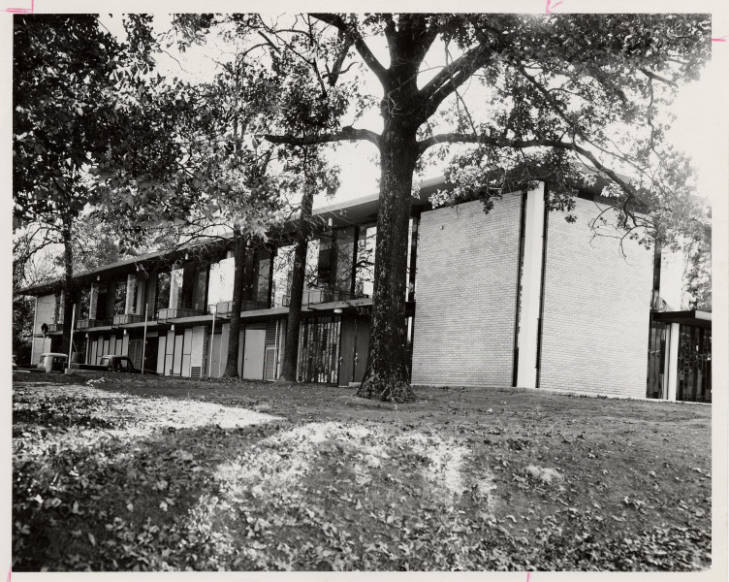 BROUGH COMMONS: The UA digital collection, from which this photo is drawn, notes that the main campus dining facility is named for a former economics and sociology professor at UA and former governor. His role in the Elaine Massacre isn’t noted.

Michael C. Pierce, associate professor of history at the University of Arkansas, brings news that a local union on the UA campus has passed a resolution urging the renaming of the Charles Hillman Brough Commons to the Wiley A. Branton Sr. Commons.

Here is a case where history could be taught, not erased, by removal of a tribute to a racist politician. It joins at UA the recent call for removal of tributes to the former UA president and U.S. senator, J. William Fulbright, a segregationist.

I turn the history lesson over to the press release provided by Pierce.

At its June meeting, the University of Arkansas Education Association/Local 965 passed a resolution calling for the University of Arkansas, Fayetteville, to change the name of the Charles Hillman Brough Commons to the Wiley A. Branton Sr. Commons. The Local declared that Brough’s role in the Elaine Massacre of 1919, in which an estimated 150 to 400 African-Americans were killed by white mobs in Phillips County, “renders him unworthy to be celebrated on a campus that prides itself on being welcoming to students, staff, and faculty of all races.” Instead, Local 965 calls for the commons to be renamed to honor prominent civil rights attorney Wiley A. Branton Sr., a 1953 graduate of the University of Arkansas School of Law who had earlier helped Silas Hunt integrate the university. According to Local 965 vice-
president Michael Pierce, the call to rename the commons is “just one part of the larger effort to address the systemic racism that has persisted on campus far too long.”

The Elaine Massacre was the response of local whites to Black sharecroppers and tenant farmers organizing a union to prevent planters and landlords from cheating them out of the profits from crops they produced. For four days (September 30-October 3, 1919), white mobs roamed southern Phillips County, killing or arresting those suspected of participating in the Progressive Farmers and Household Union of America. Five white men were also killed, most of them by friendly fire (the best primary source is Ida Wells-Barnett’s The Arkansas Race Riot [1920],  the best scholarly account is Grif Stockley’s Blood in Their Eyes: The Elaine Race Massacres of 1919 [2003]; also see Stockley, “Elaine Massacre of 1919,” CALS Encyclopedia of Arkansas. 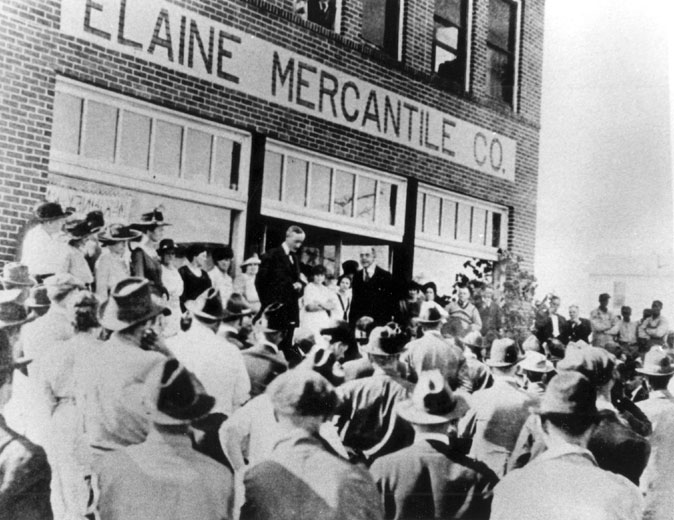 In the aftermath of the Elaine Massacre, Brough, who was serving as governor, failed to secure justice for the victims by attempting to cover up the murders of African Americans, blaming union members and their allies for the deaths of the five white men, and refusing to commute the sentences of the African Americans who were unjustly convicted of killing the five white men:

 Brough endorsed the findings of a local committee that blamed the massacre victims for the five white deaths: “The present trouble . . . . is a deliberately planned
insurrection of the Negroes against the whites directed by an organization known as
the ‘Progressive Farmers and Household Union of America,’ established for the
purpose of banding Negroes together for the killing of white people” (cited in Moore
v Dempsey 261 U.S. 86 [1923]).

 Brough praised the white residents of Phillips County for their actions during the
four days of violence: “The situation at Elaine has been well handled . . . . The white
citizens of the county deserve unstinting praise for their actions in preventing mob
violence” (Arkansas Gazette, October 4, 1919).

 Brough launched a cover-up campaign that denied the deaths of the African
Americans. According to Grif Stockley, the foremost historian of the Elaine Massacre,
“Brough had obviously committed himself to a position of totally denying that Blackshad been massacred . . . . The governor mentioned none of the names of the Blacks who had been killed. They were the enemy” (Blood in Their Eyes, p. 86).

 Brough did nothing when Phillips County prosecutors sent 75 union
members and allies to the penitentiary for their roles in the so-called “insurrection.”

 Brough stood by while Phillips County authorities conducted sham trials and
sentenced twelve union members and allies to death for their roles in the so-called
“insurrection.”

 Brough refused to pardon or commute the sentences of the twelve men sentenced
to die, even in the face of a national campaign highlighting the gross injustices of the
judicial proceedings. After Brough left office the United States Supreme Court ruled
that the proceedings against the 12 men were so grossly unfair that new trials
were required.

During his tenure as governor Charles Hillman Brough failed to protect the Black population of Phillips County and see to it that the rule of law prevailed in the state. He showed callous disregard for Black lives, and that is why there was never any attempt by state officials to count the number of African Americans killed. Having a building at the center of campus honoring Brough is an affront to everyone in the campus community working to promote racial equality and diversity.

Wiley A. Branton Sr., a native of Pine Bluff and World War II veteran, played a critical role in the integration of the University of Arkansas. He traveled to Fayetteville in 1948 to help his friend Silas Hunt enroll at the University of Arkansas School of Law and then a few years later matriculated himself. Upon his graduation in 1953, Branton emerged as one of the nation’s foremost civil rights attorneys (on Branton, see Judith Kilpatrick, There When We Needed Him: Wiley Austin Branton, Civil Rights Warrior [2007]; Kilpatrick, “Wiley Austin Branton Sr.,” CALS Encyclopedia of Arkansas.

 Branton served as the state NAACP’s lead attorney in the litigation concerning the
integration of Little Rock schools.

 Branton, alongside co-counsel Thurgood Marshall, successfully argued Cooper v.
Aaron (1958) before the United States Supreme Court. The decision was a blow to
the nation’s segregationists, undercutting the strategy of “massive resistance.”

 Branton was the first director of the Voter Education Project, a program that helped
over 600,000 African Americans across the South become eligible to vote in the
years before the Voting Rights Act (1965).

 Branton served as Dean of the Howard University School of Law.

As part of the University’s efforts to address the persistent racism found on campus, Local 965 calls on Chancellor Steinmetz and the Board of Trustees to make sure that buildings are named for people who are truly deserving of the respect of all students, staff, and faculty. To this end, the University needs to change the name of Brough Commons to Branton Commons as part of a broader effort to come to terms with the inequities and racism that continue to plague the campus community.