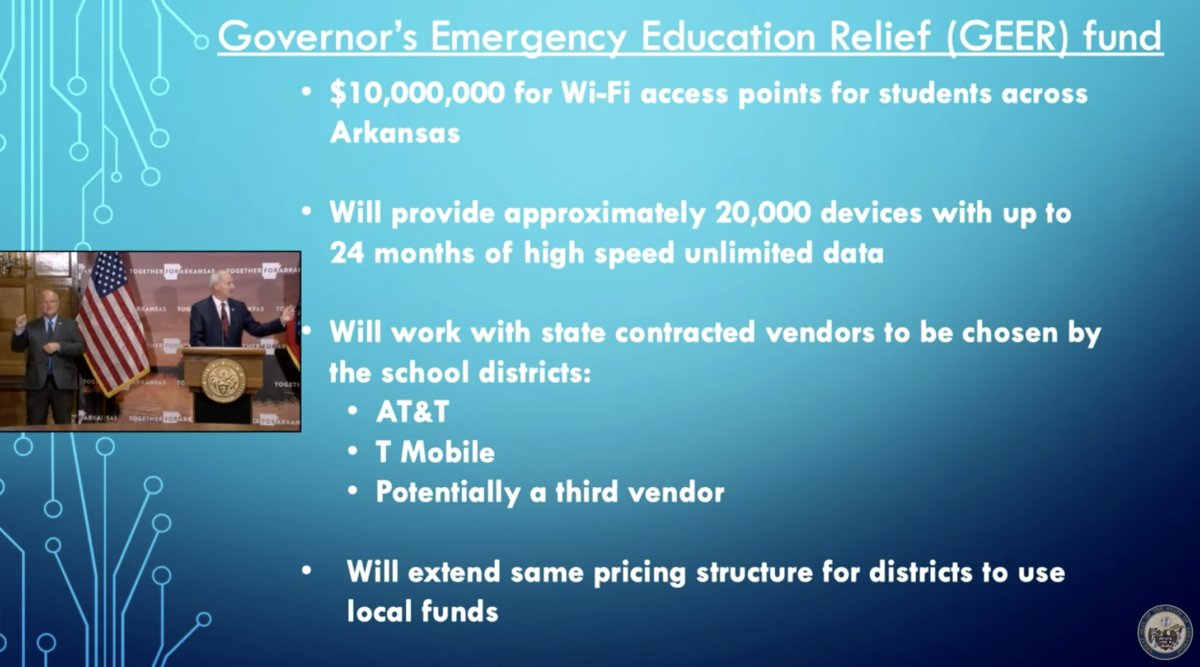 Governor Hutchinson announced today he’d provide $10 million in federal money for WiFi access to help rural schools around the state. This is to deal with expected increased demand for schooling remotely, rather than in classrooms.

The money is supposed to cover 20,000 devices for Internet access through two or three telecom vendors. They’ll be distributed based on district population. Local districts can add their money for purchases at the same price.

He also said the state would make an investment in 200 machines to perform COVID-19 tests to make up for the difficulty private labs have had in keeping up with demand.

Hutchinson said he hoped the Legislative Council would vote Tuesday for $7 million in spending to focus on COVID-19 in the Latino and Marshallese communities. He said the earlier delay was just from a desire for more information, though a vote to put off approval was marked by many critical remarks by legislators. Does he have a fallback if the legislature doesn’t approve? “I’m very optimistic and hopeful the Legislative Council will support.” There will be a backup plan, he said, but the “problem with  backup plans is that they back you up.” Any delay is a delay, he said. He said legislators were taking the virus seriously but said they were frustrated by executive action because they’d like to be more involved in policy. But the governor said there was urgency. “That’s executive leadership we’re trying to accomplish.”

Education Secretary Johnny Key said the state was surveying districts this week on preparation for the resumption of school the week of Aug. 24. This will include enrollment, safety gear, technology readiness and other questions. The results will be posted on the state website. He said the state will spend $1 million to purchase a strategic stockpile of protective equipment to help districts that run short.

He said districts will be provided more specific information about WiFi access Tuesday. Sally Bennett, superintendent of the Rivercrest School District, lauded the support as a “game-changer” for rural districts.

The governor said it wasn’t possible at this point to know if the need for access was greater than the 20,000 who’ll be covered. The hotspots will require a good cellular signal to use.

Dr. Jose Romero, the acting health director, was asked about the Peacemaker music festival in Fort Smith that was cited for failure to follow social distance and mask guidelines. He said the state would consider the issue “going forward.” The governor said plans for such events might need a closer look in the future. He said the sponsors had a good plan, but the problem was execution.

Hutchinson was pressed on mass gatherings, including a street party in Magnolia that attracted about 300 people and led to four shootings. Might they be a bad idea at this point, he asked. The governor said existing guidelines require Health Department approval for large crowds. But expressions of free speech are difficult to limit, such as the Black Lives Matter protests.