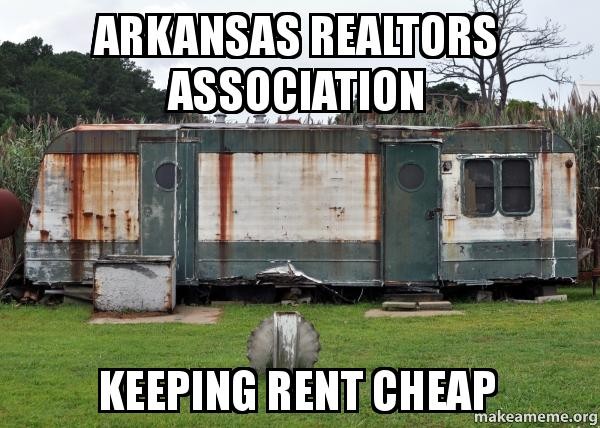 IT NEVER GETS OLD: The meme developed for unsuccessful efforts to pass a decent landlord-tenant bill in the Arkansas legislature.

Rachel Herzog in the Arkansas Democrat-Gazette reported the vote of the 10-member Board:

Ward 7 City Director B.J. Wyrick and at-large City Director Gene Fortson recused from the vote because they own or have investment holdings in rental property.

Recusal is the same as a no vote when a majority of the board is necessary for passage. So the real estate lobby had two votes in its pocket at the outset.

Hines is a steadfast business community supporter, so no surprise there.

I’ve asked Erma Hendrix, who represents one of the poorest wards in the city on the east side of town, why she didn’t stand up for a fellow African-American board member. She had complained to me just last week about how her proposal to regulate yard parking was suffering because it was proposed by an African-American and competing with a similar proposal by a white board member.

Joan Adcock has long stood up for landlords. She’s elected at-large. These seats require more money to win as a rule and thus candidates are often beholden to the business community more than people in the lower-income Southwest Little Rock neighborhood from which Adcock rose.

Doris Wright, though she also represents a low-income ward (including John Barrow Addition), is a virtual subsidiary of the real estate lobby. Want proof? You need to look no farther than the campaign contribution report she filed in 2018. The contributors to her $21,000 haul were a Chamber of Commerce Hall of Fame, heavy on real estate industry and contractors.

Among her financial backers: Dickson Flake, John Flake, James Irwin, Gus Vratsinas, Haskell Dickinson, Lisenne Rockefeller, Hank Kelley, Jeff Hathaway, William Rector, Lou Schickel and Wiliam Clark. Oh, wait, and one more: She got a tidy $1,000 from the Arkansas Realtors PAC. If appearances mattered, she should have joined Fortson and Wyrick on the recusal list.

Adcock hasn’t had to do much fund-raising in recent times as a long-term incumbent. She was essentially unopposed in 2016 (an opponent withdrew from the race) and faced light opposition in 2012. Nonetheless, notable among her contributors of more than $5,000 in 2012 were some familiar real estate and construction names: Steel magnate Tom Schueck, Colliers International, the Homebuilders Association PAC, Keith Richardson of Richardson Properties and contractors Haskell Dickinson and Robert East.

Money talks in Little Rock city government. And people who’ve lost their jobs in the pandemic and can’t pay rent don’t have much of it.

It had been said repeatedly, and again last night that the resolution has no legal effect. But a real estate group objected that it would send a bad message to judges, police and others. It wouldn’t be relevant in any legal circumstance. But better not to give any softies even an appeal to mercy.

See, it’s the slippery slope. Show a scrap of compassion for poor people and someday they might even get real legal protection, such as the end of Arkansas as the only state in the union with a criminal eviction statue and a landlord law so bad it doesn’t require habitable premises.

UPDATE: Director Hendrix responded to my question about why she hadn’t voted for the Richardson resolution this way:

Did you notice who supported the eviction moratorium “this time,” rather than, the last?
I am very “observant,” also.

This was the first vote on the resolution. It was up for consideration July 21, but a vote was delayed. At the time only Richardson, Hendrix and Webb voted against deferral. If you take that as positive votes, Capi Peck and Dean Kumpuris were added to supporters, while Hendrix defected. Webb’s support might be a factor. She’s sponsoring the competing yard parking ordinance.
UPDATE II:

“Even though the majority of City Directors voting last night supported a resolution calling on the Governor to halt evictions and set up a state fund to help renters during the COVID-19 health crisis, there were not enough votes to pass the resolution.  Almost 45% of the households in the city of Little Rock are occupied by renters.  The majority of renter households are Black (57%).  We commend city directors Dean Kumpuris, Capi Peck and Kathy Webb for their vote in support of the resolution and commend Mayor Frank Scott for his support.  We want to thank Director Ken Richardson for sponsoring it.

We are deeply disappointed that Ward 6 Director Doris Wright voted against the resolution and that Ward 1 Director Erma Hendrix voted present.  Many of their constituents need the protections and help that an eviction moratorium and fund for rental assistance would provide.  The COVID-19 pandemic and the economic downturn have had a disproportionate impact on Black communities in Arkansas and nationwide.  Many people in these two wards have lost work, had their hours reduced or have not yet been approved for unemployment assistance.  These are people who work in day care facilities, nursing homes, restaurants, hotels and the service sector where job loss has been great.  Many are behind on the rent and are doing the best they can to stay afloat financially.

A wave of evictions will increase the number of homeless people in our city and have a negative impact on neighborhoods south of the interstate.”