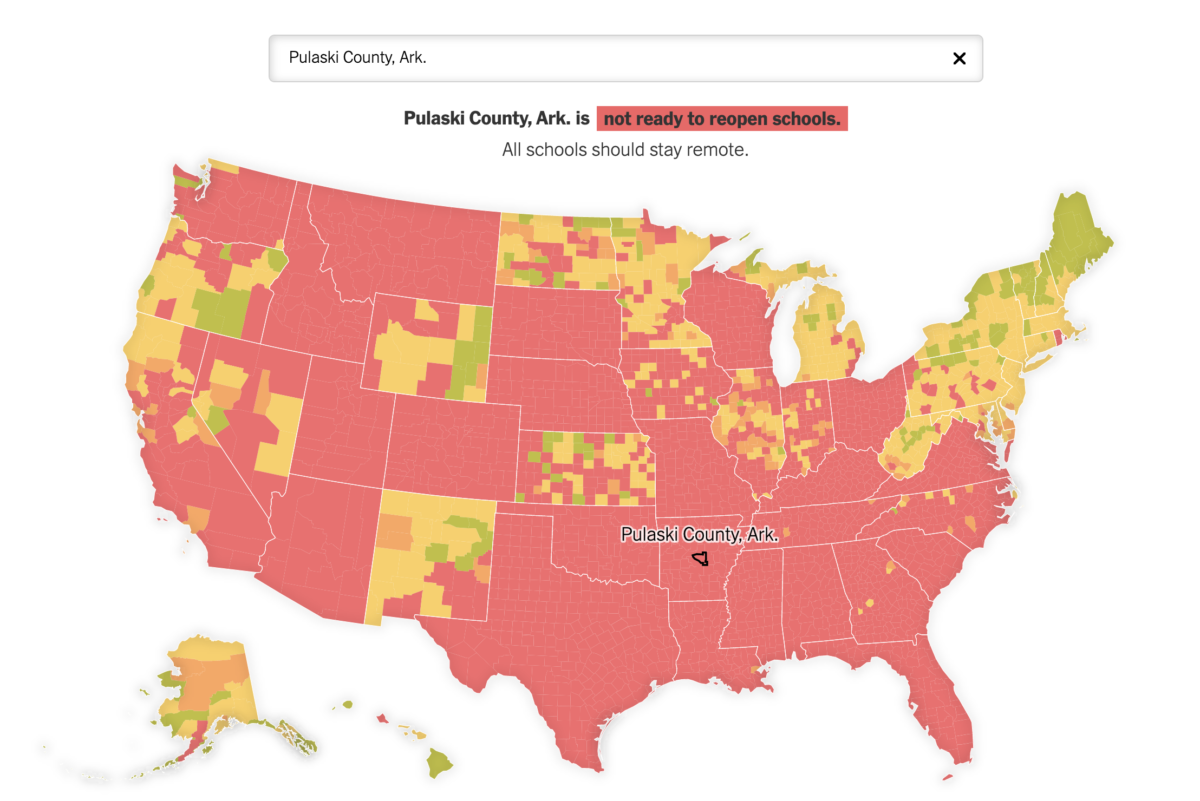 The New York Times has compiled a nationwide map (searchable at the link) assessing which counties are ready to reopen school classrooms. As the map shows, none in Arkansas qualifies.

The metrics used, with variables:

Our analysis considers two main things: the rate of new infections in a county and the county’s testing capabilities. We used guidelines from the Harvard Global Health Institute, which proposed a variety of ways to open schools as long as the county has fewer than 25 cases of Covid-19 per 100,000 people. We also used the World Health Organization’s proposal to open only if fewer than 5 percent of all those who are tested for the virus over a two-week period actually have it.

The second part matters because if a higher proportion of people are testing positive, it could mean that not enough tests are being conducted to adequately measure the spread.

Not every county that opens schools would do it the same way. Guidelines proposed by Harvard allow some elementary schools to open first while high schools would remain online. Here are those guidelines applied to our rankings.

By every variable illustrated, including options for reopening elementary and middle schools but varying restrictions on high school, Arkansas still flunks.

And from CNN comes more reporting underscoring the declaration by Little Rock teachers yesterday that they will go to work Aug. 24, but not in a populated classroom because it is unsafe.

Children so far make up about 7 percent of COVID-19 cases while comprising 22 percent of the population, but the number has been steadily increasing since March. Says CNN:

“Recent evidence suggests that children likely have the same or higher viral loads in their nasopharynx compared with adults and that children can spread the virus effectively in households and camp settings,” the [CDC] guidance states.

Transmission of the virus to and among children may have been reduced in spring and early summer due to mitigation measures like stay-at-home orders and school closures, the CDC says.

But now, schools and universities across the country are reopening and in some cases have had to readjust their approach following positive tests among students and staff. How to safely welcome students back has been an ongoing debate between local and state leaders as some push for a return to normalcy and others fear returning to class could prove deadly for some.

So there you have it. Arkansas is wholly unready for a return to normal classes, but we are pushing ahead, including with football, which is already in progress.

Interesting note on football dug up by an FOI request by lawyer Justin Eisele (thread of comments here).

First, I received some of the email exchanges and completely striking is that the Governor knows that the Physicians Pandemic Group is against sports in the fall. Like, why is that not the end of the examination? We go to lawyers for legal, and doctors for health. See below email

Two more things: Education czar Johnny Key, who controls the Little Rock School District directly, and Governor Hutchinson both harrumphed at the LREA’s announcement that its teachers would work, but not in classrooms with students. It’s the functional equivalent of a strike, they suggest, at least against the work rules Hutchinson has dictated. Teachers must be in rooms with students.

Two things about that:

Why must teachers in real public school districts be in a classroom with students, no exceptions, while the state allows thousands of students to attend so-called “virtual charter schools”? This for-profit industry, which already owed its expanded size to Johnny Key’s legislative trickery when he was a state senator, has been given a huge expansion of seats by the Hutchinson-appointed state Board of Education. It gets the same money per student that real schools get, with no cafeterias, gyms, football stadiums, full staffs and other costly items.

If these all-virtual schools are legal, why can’t the Little Rock School District, or any other, choose to have an all-virtual schedule as well, or a mostly virtual schedule, with dramatically reduced daily enrollments achieved by splitting days in real school? The answer lies in the motivation.

Little Rock is screwed, of course. Johnny Key is its unreachable school board, free to override community wishes on any whim. When Little Rock gets its school board back, it is even prohibited from filing lawsuits. Which is important.

One is badly needed. There is no doubt Governor Hutchinson has the statutory power to issue emergency directives to protect people’s health. Ordering people back to school in a risky setting is not exactly an emergency health move. To the contrary.

So the governor had to find another excuse to be school dictator. He’s fallen back on the state Constitution’s language on the state responsibility to provide an equal and adequate education. It is a dubious premise. That constitutional provision requires the state legislature to provide adequate funding for equitable schools. It does not provide emergency executive authority to the governor to take over the state’s system of public education and strip local control.

Needed: A school district with gumption (and legal ability) to challenge the governor’s unconstitutional takeover.

For one thing, is it equal to let some schools have solely virtual education, but not others?

A lawsuit would lay bare what this is about, though the governor has already said as much repeatedly. The governor wants schools as babysitters so people will go to work, rather than staying home with kids.

It’s about money. Tax revenue from a bigger economy. Health — of children and particularly of teachers — is a secondary issue. The governor’s cheerleaders are busy on social media employing the Trump defense for his failure to address the pandemic: “Hey, the death rate is low and the dying are mostly washed-up old codgers anyway.” Death, gruesome illnesses spread unknowingly and lifelong heart conditions among the “cured,” including children, are just the price of freedom and Arkansas tax revenue.

Drink up. The bars are open. And some benefit football games are on tap next week, so grab your stadium cushion.

PS: Herd immunity is your cure? Dream on. A real-life illustration says a belief in that could spell disaster.