Five former Mississippi high school students are speaking out about a Republican candidate for state Senate in Arkansas this year. They say they were terrorized by him as a school mate when he wore Ku Klux Klan regalia on Halloween in 2000.

He is Charles Beckham III of McNeil, a Republican challenger to District 12 Democratic Sen. Bruce Maloch of Magnolia. Beckham, 37, moved to Arkansas a few years ago and got in the propane business. In a pre-election interview with the Arkansas Democrat-Gazette, he said he was a real conservative as opposed to Maloch’s Blue Dog Democratic brand.

Despite multiple phone calls and e-mails to Beckham; Republican Party Chair Doyle Webb, who’s been supporting Beckham; and a political consultant who communicates with Beckham, I’ve been unable to get a comment about the school mates’ memories of that long-ago Halloween.

Five who attended the Mississippi School for Mathematics and Science in Columbus with Beckham in 2000 talked to me. Others have commented on Facebook. Comments posted on Beckham’s Facebook page have been removed.

I talked with four women who were juniors in the school when Beckham, whom they knew as Bubba, was a senior. I also spoke with a male student who was a member of Beckham’s class of 2001. All witnessed the event. All gave similar accounts.

The residential school on the campus of Mississippi University for Women had two dorms, one for men and one for women. Generally, students of the opposite gender weren’t allowed beyond the lobby of the dorms. But a Halloween tradition was to open the dorms for trick-or-treating.

That night in 2000, all five said Beckham strode into the women’s dorm with two friends in what the other students described as full Klan regalia, not just costumes improvised from bedsheets. The robe bore a circular insignia, one student recalled, and their outfits included a pointed hat with a mask. They have no photos.

VICTORIA BROWN: ‘Petrified’ by a trio in Klan outfits.

Victoria Brown, a Black woman who now lives in Suffolk, Va., remembers that the men weren’t “skipping” or acting playful. They were marching, projecting a “commanding presence.” She remembers Beckham, a formidable figure, in the lead. She remembers thinking later, “Did I see what I just saw? Gee, they just have these [outfits] at home? Do they do this on the weekend?”

“I just remember being petrified to the point of tears,”  Brown said. She said Klan outfits were supposed to “strike fear” and they did that night.

Alana Nichols, a Black woman who now lives in Birmingham, remembered it the same way and said women rushed out of the dorm in terror.

All agreed that the men didn’t behave in a jocular fashion, as if it was a prank. “He was serious,” Nichols said.

Safira McGrew, a Black woman who lives in Antioch, Calif., additionally remembered Beckham as others did, for his big red pickup with a Confederate flag decal in its rear window. They said he also displayed a Confederate flag in his dorm room, as did his girlfriend, who had a Black roommate.

Jennifer Leigh Ann Jackson, a white woman who lives in Brandon, Miss., said Beckham and his girlfriend, now his wife, were outspoken about what Jackson characterized as “Rebel pride.’

She said, “This was not some isolated event, like maybe he had a bad moment.”

The three in Klan robes were ordered out of the dorm by a dorm supervisor.

What happened afterward isn’t entirely clear. The current school director wouldn’t discuss Beckham’s record without his permission, not even to confirm the dates he attended.

All three who wore robes were out of school immediately afterward for a period of time, the former students recalled. Beckham never returned to Math and Science. He graduated from high school in Pascagoula, according to the Democrat-Gazette article.

Dr. Eric Seymour, a white physician in Wenatchee, Wash., was a member of Beckham’s class of 2001. He said it’s useful to understand the context. Mississippi came late and grudgingly to school desegregation. At the boarding school, a significant percentage of some 200 students, both Black and white students, came from primarily one-race schools. The Math and Science school had perhaps 20 to 25 percent African-American students, he said.

“It led to an environment where for the first time a lot of students really had to exist in truly integrated environment.” It was sometimes uncomfortable and informal segregation persisted, such as in the dining hall. He said many Black students felt betrayed that punishment over the Halloween Klan outfits had not been more severe.

Seymour, who taught at a predominantly Black public school before going to med school, doesn’t believe the Klan costumes were an ill-considered joke.

“Though we were young, I think they knew full well the implications of such, particularly that it’s a  tactic of fear and intimidation.”

The memory lives vividly with the five I talked with. “It was a very stressful event,” McGrew said. She also remembers unhappily having to walk daily past Rebel flags displayed in dorm rooms.

All wanted to spread the word to potential voters in Arkansas.

Brown said she had hoped school mates who wrote Beckham on Facebook would prompt him to acknowledge the event and perhaps make amends for a youthful mistake. That didn’t happen.

Said Seymour: “When I think about people who would do good as a public servant, he is close to the last person on that list.”

Seymour has another reason to remember Beckham. Seymour was struggling with sexual identity in high school. He’s now out as a gay man. Beckham taunted him in high school, he said.

“He personally terrorized me. That kind of speaks to his character,” Seymour said. “He’s a bully. He’s not a nice guy.”

Beckham and the Republican Party have been circulating flyers slamming Maloch, including one challenging his position on abortion. It is an attack so at variance with Maloch’s record that it drew a defense of Maloch by the Republican leader of the Senate, Sen. Jim Hendren. Maloch is a reliable vote for anti-abortion legislation, though he did vote, on the losing side, to sustain Gov. Mike Beebe’s veto of two likely unconstitutional abortion restrictions.

Beckham has raised some $16,000, about two-thirds from Republican committees, and also loaned his campaign $15,600. He has disclosed no payments to political consultants, only some printing costs for mailers. 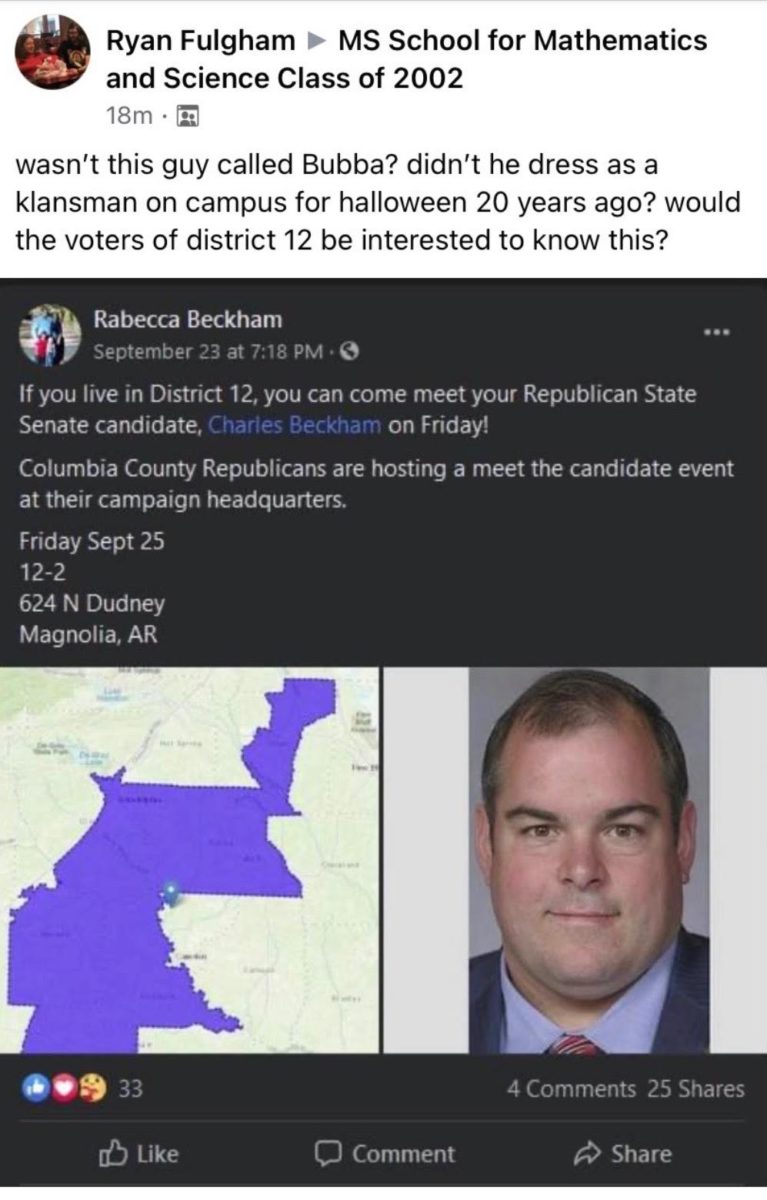 The students began spreading the word after learning of Beckham’s candidacy on a Facebook page for former students at the Mississippi school. That word circulated in turn to students who attended the Arkansas School for Mathematics, Science and the Arts. From one of them, I learned about the Mississippi students. I got in touch with them for telephone interviews over the last few days. 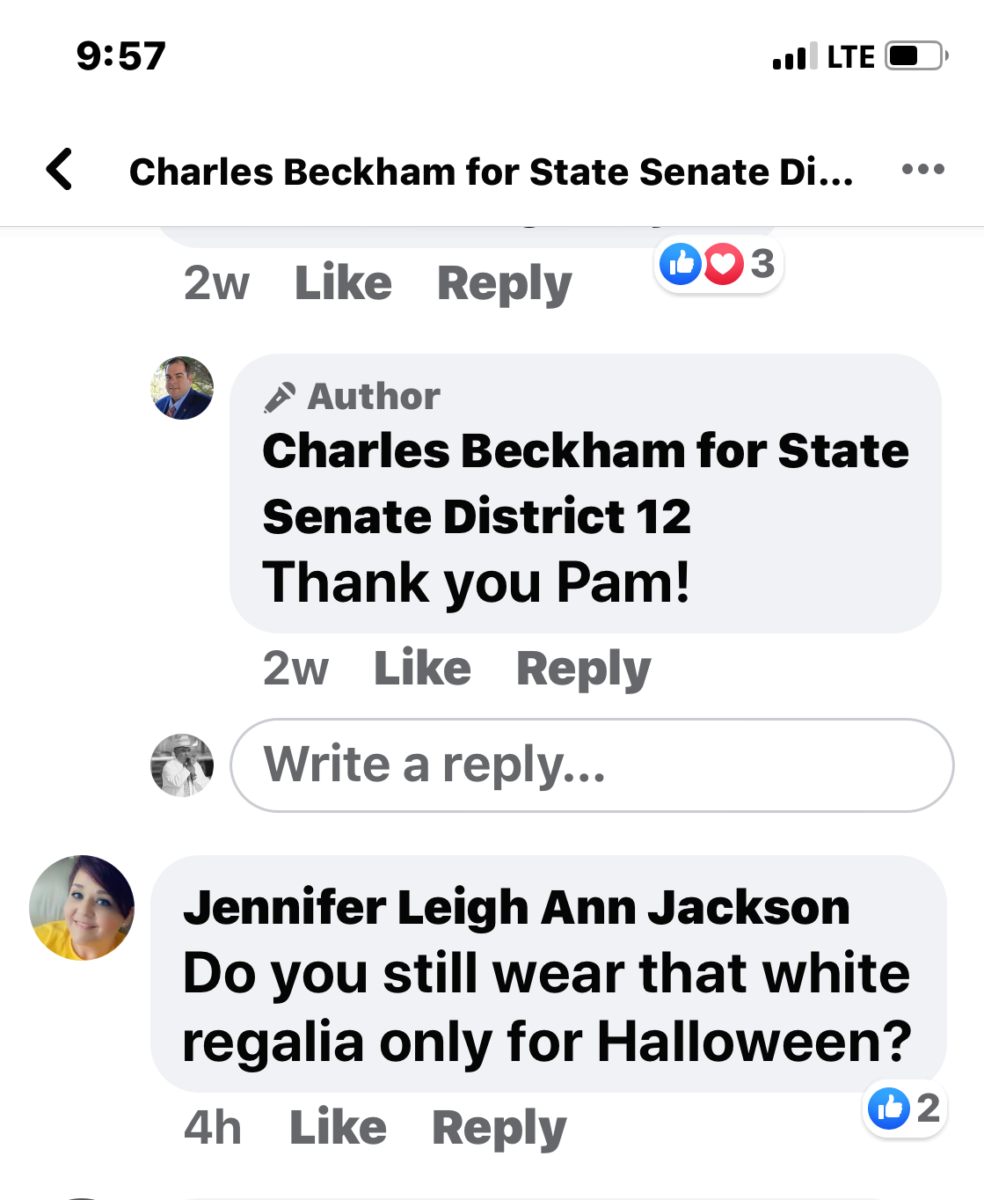 Maloch had no comment. He said he was trying to take the high road in the campaign.