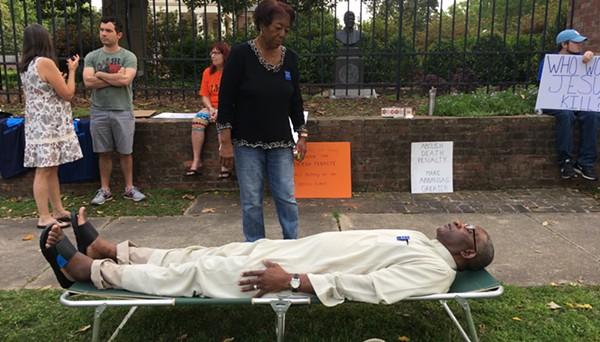 THE ROOT CAUSE: Wendell Griffen’s role in a protest in 2017 continues to cause controversy.

Circuit Judge Wendell Griffen will be heading back to the Arkansas Supreme Court over its earlier order that he is not allowed to hear capital cases.

The Supreme Court ordered him off capital cases in 2017 after he participated in a prayer vigil outside the Governor’s Mansion that included people protesting the death penalty. He lay on a cot in a manner many took to be emulating an inmate awaiting lethal injection. He has said he was leading a prayer vigil for members of the Bapitst Church he pastors.

Since then he’s lost a federal lawsuit over the issue. Dueling ethics complaints by the Supreme Court and Griffen produced no discipline against either party. The Supreme Court also denied his effort to be restored to capital cases.

New today is an order issued by Griffen in the capital murder case against Napoleon Haire, charged with killing two people in Sherwood during a robbery.

The state of Arkansas, through Prosecuting Attorney Larry Jegley’s office, asked that the case be reassigned from Griffen’s court. It landed there by random assignment. The state’s motion noted the Supreme Court’s 2017 order. Jegley’s office said it was only obeying the Supreme Court order, saying the office has “complete faith in the fairness of Judge Griffen when on the bench.”

Griffen denied the request. He noted that Haire also has objected to reassignment of the case. He said the Supreme Court order applied to cases pending at that time, before this case arose. And he said he understood the prosecution merely wanted to avoid being held in contempt and was not asking him to recuse. But he made a broader argument:

Nevertheless, the controlling issue is whether the reassignment
motion challenges the ability of the undersigned to discharge the duties of a
circuit judge in this case. In other words, given that neither the State nor
Haire allege that the undersigned has engaged in conduct demonstrating
unfairness, bias, prejudice, or other improper judicial conduct in this case,
does Curiam Order No. 17-155 otherwise present facts or opinions
indicating that the undersigned is not fair and impartial in this case?

The obvious answer to that question is “no.” Per Curiam Order No.
17-155 – issued on April 17, 2017 – cannot operate as a judicial
determination about whether the undersigned is fair and impartial in this
case because this case was not filed until January 3, 2020. The circuit
clerk randomly assigned this case to the undersigned because Judge
Piazza’s retirement required that another judge be assigned to it. None of
those events support an inference that the undersigned has acted unfairly
in this case.

It should be equally obvious that a prospective declaration that the undersigned or any other judge whose moral or religious scruples question the morality of capital punishment cannot be fair and impartial in a capital murder case poses a threat to the right of a person accused of capital murder to a fair trial. The Arkansas Supreme Court has never held that a judge or juror can be disqualified for cause for holding moral or religious objections to capital punishment. Beyond that, it has been clear since 1968, when the Supreme Court of the United States decided Witherspoon v. Illinois, 391 U.S. 510 (1968), that the right to a fair trial for a person accused of murder is violated when prospective jurors are removed for cause merely because they hold moral or religious concerns about capital 5 punishment. If that is true for jurors, it must be equally true for a randomly assigned trial judge.

UPDATE: Jegley confirmed that he’s obliged to appeal the ruling on account of the Supreme Court order. He reiterated what Griffen cited in the motion, that his office had never had a concern about Griffen’s fairness.

The death penalty is currently being sought in this case, but it is still being developed for trial and the prosecutor’s office typically waits until later in the process for a final decision on seeking capital punishment.

Jegley’s motion notes that Judge Vann Smith, who oversees the judicial district, to allow capital cases to be assigned to Griffen again, depending on whether the prosecutor waived the death penalty. It notes this puts the prosecutor in a difficult position of having to make that decision at the outset of a case for a variety of reasons.

The Supreme Court got into this mess partially from an overheated, hasty response under legislative pressure to Griffen’s appearance at the demonstration. If anything, it’s gotten more sensitive to Republican legislators since then. And Griffen has won few judicial friends with his propensity for opinionated speech, protected though it is by the First Amendment.