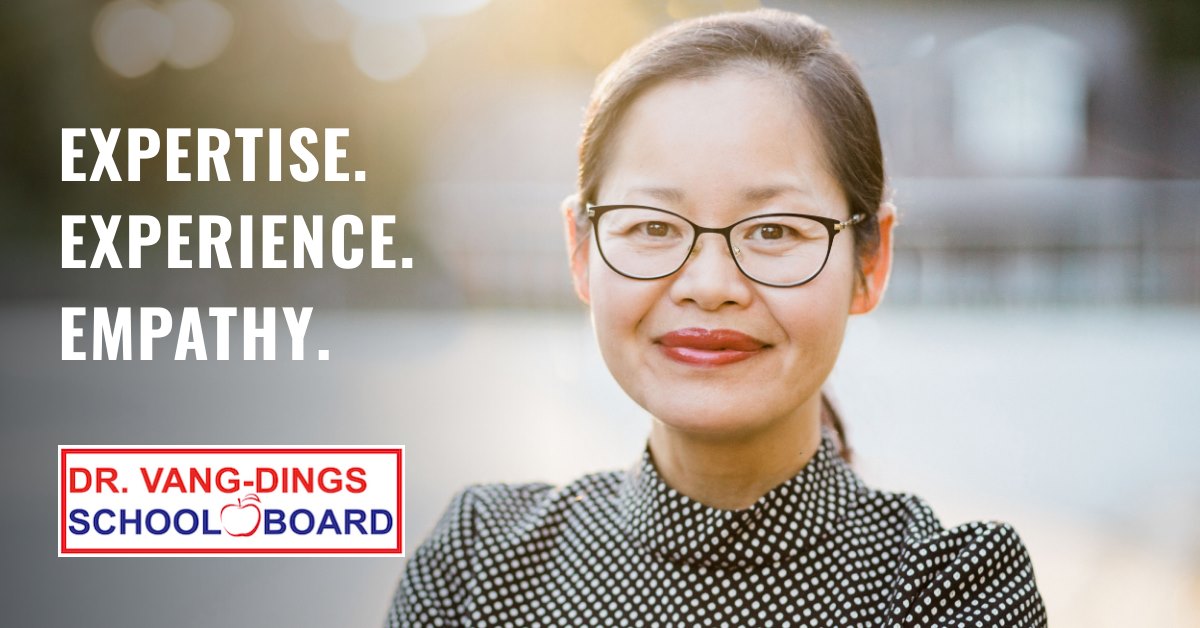 THE CHOICE: If any doubt existed that Dr. Vang-Dings is the pick for Zone 9 on the Little Rock School Board, the campaign reports filed today put it to rest.

Today’s the day that municipal and school board candidates are supposed to file their first and only pre-election campaign finance reports, often a window into the type of candidates they’ll be by whom they might owe favors.

Only a trickle has hit the clerk’s website for races in Pulaski County so far, but there’s some interesting info there, particular in a school board race where enemies of the Little Rock School District have lined up against a candidate endorsed by the Arkansas Times.

The Little Rock School Board rundown so far.

No reports on file.

No reports on file.

Only a report from Hatter is on file so far. She reported raising $2,500, including $1,000 from the Little Rock Education Association and $300 from the Progressive Arkansas Women PAC and contributions from three Democratic legislators, state Reps. Denise Ennett ($75) and Jamie Scott ($100) and state Sen. Will Bond ($100).

Ryan Davis and Norma Johnson are the candidates.

No reports are accessible for either yet, though the clerk’s website indicates it has a report on file from Johnson.

Greg Adams and Benjamin Coleman Jr. are the candidates.

Adams, a former School Board member, reports more than $18,000 in dozens of contributions, including $1,000 each from Lisenne Rockefeller, the Little Rock Realtors PAC and Nan Ellen East and $2,800 from the Progress PAC, its war chest made up of contributions from Baldwin Shell Construction, contractor Haskell Dickinson and the Jackson Law Firm of North Little Rock. Nothing on file for Coleman.

An interesting race between a superb candidate Dr. Kieng Vang-Dings and Jeff Wood, a lawyer.

Wood reports $19,351 in contributions from a murderers row of Republicans, supporters of the charter school movement that has been so damaging to the Little Rock School District and old enemies of LRSD. His money includes $500 from Diane Zook, the former state Board of Education member who made bedeviling the district her life’s work on the board; $2,800 from Republican Mike Huckabee’s PAC; $250 from Huck’s daughter, Sarah Sanders; $1,000 from Gary Newton, Zook’s nephew and a charter school lobbyist working for Arkansas Learns, a beneficiary of Walton Family Foundation support; $2,800 from the Arkansas Learns PAC, about half of its treasury provided by Republican supporter Lisenne Rockefeller; another $1,000 from Rockefeller individually; $2,800 from the Progress PAC, partially financed by Baldwin Shell; another $1,000 from Scott Copas, CEO of Baldwin Shell; $500 from Bill Dillard III, a supporter of Arkansas Learns and an eStem charter school board member; $100 from J-PAC, whose address is the postoffice box of Sen. Mark Johnson. Johnson doesn’t live in Little Rock School District, but he got support from Jeff Wood for an 11th-hour piece of 2019 legislation that would have extended state control of the Little Rock School District. Wood also got $500 from the Arkansas realtors PAC and $200 from A.J. Kelly, a lawyer recently working in behalf of the Republican Party legal effort to kill a constitutional amendment to discourage gerrymandering. Also $500 from Melanie Fox, a former Little Rock School Board member who fell out with the majority black school board that the business interests worked to force out through state takeover. The Republican Hutchinson administration put Fox on the puppet community advisory board for the district, along with Wood. Also, he got $2,500 from right-wing Republican poultry magnate Ron Cameron.

Vang-Dings has raised $6,113, nearly all in small contributions. Her biggest contribution was $500 from Tim Jackson, who’s been helping her campaign and wrote a splendid op-ed after the D-G endorsement commented — perhaps innocently but unfortunately — that Wood spoke English. Dr. Vang-Dings, who came to America as an English learner, speaks English quite well, Jackson noted.  She’s also an educator and scientist who’s written K-12 curriculum. And independent. And blessedly not beholden to the gang lined up behind Wood.

Wood’s endorsement by the Democrat-Gazette is as good a tell as any. Charter schools and union hatred are the key reasons for support from D-G publisher Walter Hussman (a board member of Arkansas Learns and long a backer of the Billionaire Boys Club intent on upending traditional public schools).  Branch, Anderson, Johnson, Mackey and Wood are Hussman’s picks. The LREA has endorsed Calloway, Noland, Hatter, Adams and Vang-Dings. The Times and I like this group, too, but have also noted some well-considered statements by Michael Sanders.