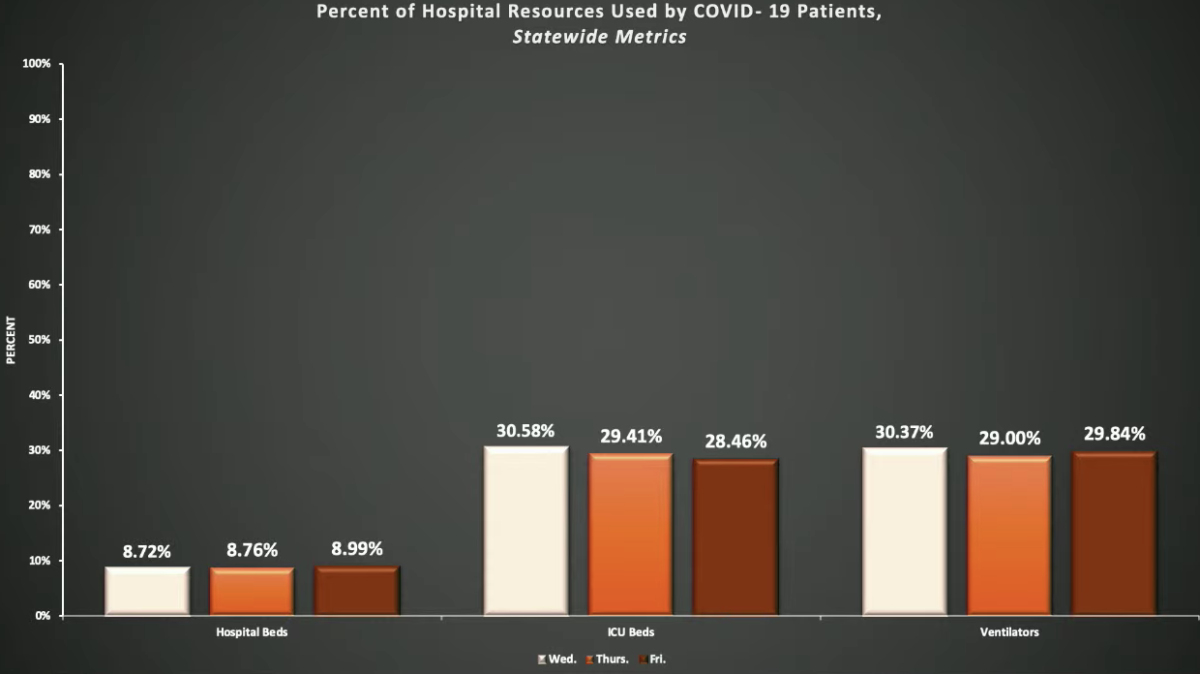 As promised, Governor Hutchinson today appointed a COVID-19 Winter Task Force to study what to do should the increase in COVID-19 cases threaten to overwhelm Arkansas hospitals.

The winter holds “challenges,” he said — rising hospital demand and a rising number of cases. The task force will look at hospital capacity and figure how to manage it, including state financial support.

The daily COVID-19 summary isn’t ready yet, but the governor said it will be a new daily record, 2,312 new cases in 24 hours. Also, it will include a record in the hospitalization count, up 21 to 826.

Stressed hospital workers are further pressed by quarantine requirements when they are exposed, the governor said.

He said the task force would begin with four key areas of emphasis:

The governor will chair the group and Surgeon General Greg Bledsoe will be the vice-chair. Health Director Jose Romero will be a member. Other members include leaders of hospitals around the state, lobbyings for nursing homes and hospitals, state officials, physicians and others.

The group will begin meetings Monday. The meetings will be held privately.

Hutchinson said the state would spend $1.6 million for an advertising program to encourage better health practices through the Health Department, the parks department and the Economic Development Commission.

He also said he had authorized 30 members of the National Guard to help with contact tracing.

Asked about specific steps the state might take, Hutchinson fell back on his usual answer — comply with simple public health guidelines. He said circumstances might require other steps, “but not necessarily causing unemployment.” Romero, too, emphasized that the virus is out of control because people are not complying with guidelines. “It is not too late to stop this,” he said.

Might the time come for fines for not wearing masks? Romero said he’d leave that to the governor, but people need to wear masks. Bledsoe echoed this and spoke of his own experience as one of seven family members who tested positive, one of whom required 10 days of hospitalization. He said his father had been very ill but was doing well now.

The governor and Romero objected strenuously to the characterization by a reporter that the governor had rejected recommendations from the Health Department, such as shutting down certain businesses, in response to the rise in cases. They were merely “options,” they said.

“I’m opposed to a shutdown,” Hutchinson said. “We don’t want to shut down and I don’t expect that to be the result of this task force.”

What can the advertising campaign do to convince people who’ve absolutely refused to comply? “Sometimes advertising can hit different ways with different messages that appeal to them,” Hutchinson said.

Hutchinson said the task force will concentrate on hospitals, not business practices. This came in response to a question about a report that some food processing businesses were allowing employees only one paid period in quarantine, but no payment for subsequent quarantines.

He was asked again given the rise in cases whether there was any plan to go to an all-virtual school. No, Hutchinson said. The importance of in-class instruction is too important. But schools can “pivot” to virtual as needed. All-virtual “is not the right thing for our kids,” he said.

It’s the right thing for Bentonville high school students the next two weeks, however.

In response to another question, he said it might be useful to have someone in law enforcement added to the task force. He again emphasized the mask mandate contains a penalty, but he acknowledged a “reluctance” to enforce it.

He said more businesses needed to “step out” to enforce guidelines. He said he’d been told Walmart was preparing to reinstitute stronger encouragement for social distancing in its stores.

The governor was asked if school sports were contributing to the rise in cases. “The football season has been fairly successful,” he said. He said Romero was a little more worried about basketball, which is held inside. And, again, he said parents and spectators needed to follow guidelines. In other words: Play ball! Romero said the problem wasn’t sports, but parties after.

The early reviews haven’t been spectacular. From one of my favorite UA profs:

The fundamental flaw that will KILL more Arkansans is thinking this is an educational issue. People have been “taught” to wear a mask for 6 months. They don’t want to. This isn’t ignorance. These folks are making a CHOICE that risks others’ lives. Enforce the damn masks! https://t.co/n443eLbCPu

Governor Asa Hutchinson’s latest task force to address COVID is a small effort toward acknowledging the unmitigated spread of COVID in Arkansas, however its limited scope fails to address the needs, security, and prosperity of Arkansas families.

“The people of Arkansas didn’t elect a task force, they elected a Governor. Leadership means making tough decisions even when they’re unpopular. You’d think the Governor would rather be unpopular with voters and save lives, than be popular and attend their funerals. The governor’s shown pragmatic leadership and did what he could to keep our economy going but rising numbers and limited hospital capacity have overcome his best efforts.“ said DPA Chairman Michael John Gray. “Since the start of this crisis, the state has never followed its own COVID guidelines for lifting restrictions, so I have to wonder what the point of this task force is. It should be focused on limiting the spread of COVID — but also on ensuring the rights and incomes of essential workers. If our state needs your work, we better be there for you if you or your family member gets ill. That means making sure there’s time off to quarantine, and that you’re not losing your income for doing the right thing.”