Read this month's issue
Browse the issue archives
Advertisement
Home Arkansas Blog Never forget who supported the Trump coup attempt. Or is it over? 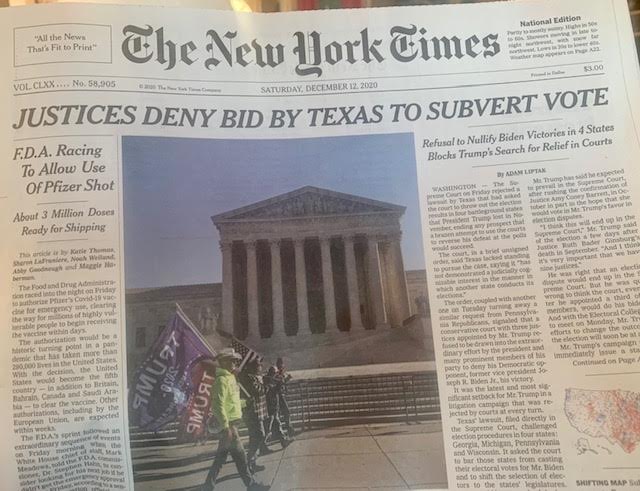 The New York Times got it right. If they could have found a way to work “sedition” into the headline it would have been even better. A lot better than the D-G’s version: “Texas’ election suit rebuffed.”

Also good would have been a pull quote from the 14th Amendment:

I’m with the New Jersey congressman who said the 126 House Republicans who supported the meritless Texas lawsuit to strip four Biden states of the vote should be removed from office for seditious behavior. That would include U.S. Reps. Bruce Westerman and Rick Crawford. Other seditious Arkansans include Attorney General Leslie Rutledge, who intervened with taxpayer financial support, and the 33 members of the Arkansas legislature, led by Sen. Trent Garner and Rep. Mary Bentley, who gave legislative support.

Don’t forget what they did.

U.S. Rep. French Hill and Steve Womack declared support for the right of states to manage their elections. They refused to sign. Sens. Tom Cotton and John Boozman were MIA.  The chair of the Arkansas GOP, Jonelle Fulmer declared she was on the Trump train to overturn the democratic process.  Governor Hutchinson struck his typical wishy-washy posture in the Democrat-Gazette:

“The Attorney General is exercising her discretion as the elected official responsible for legal action on behalf of the state. Only the Attorney General can provide the reasons that led to her decision to join the case. I was not consulted in regard to the decision. As Governor, I have not been asked to sign onto any brief and I do not intend to do so.”

You know what’s missing. A definitive answer. I asked the governor for a statement yesterday, too. I put the question this way:

It’s time for the governor to say whether he supports the Texas filing at the Supreme Court and the Attorney General’s intervention. 33 legislators have now signed a resolution in support of the Texas filing.

Does the governor support it?

With the always doomed-to-fail litigation at the Supreme Court, Republicans have gone beyond the indulge-the-toddler-while-he-cries-it-out phase of this debacle to a dangerous new stage: Incentivize the toddler. Reward his bad behavior. Encourage his belief, as poisonous to democracy as it is delusional, that the election was stolen.

And they are laying the predicate for a contentious new phase of American democracy, if it can continue to be called that, in which election results — after appropriate recounts and audits and certifications — are no longer accepted. Instead, they merely open the door for a second phase of legal and political guerrilla warfare in which no tactic, no lie, no baseless claim is off-limits. Democracy cannot function this way.

And there was this in the New York Times about the “indelible stain”:

The Supreme Court repudiation of President Trump’s desperate bid for a second term not only shredded his effort to overturn the will of voters: It also was a blunt rebuke to Republican leaders in Congress and the states who were willing to damage American democracy by embracing a partisan power grab over a free and fair election.

But is it over? Rudy Giuliana contends there are other options. Judge Judy?

WE HAVE JUST BEGUN TO FIGHT!!!

And there are MAGAs on the march.

Could Arkansas Republicans get a backbone and a shred of decency? Could they do as Hillary Clinton did hours after her defeat was apparent in 2016 and concede graciously? By all means, vow to fight for four years to reclaim the White House. But put some meaning in those words “American exceptionalism” and “peaceful transfer of power” that they seem to use only when THEY are in power.