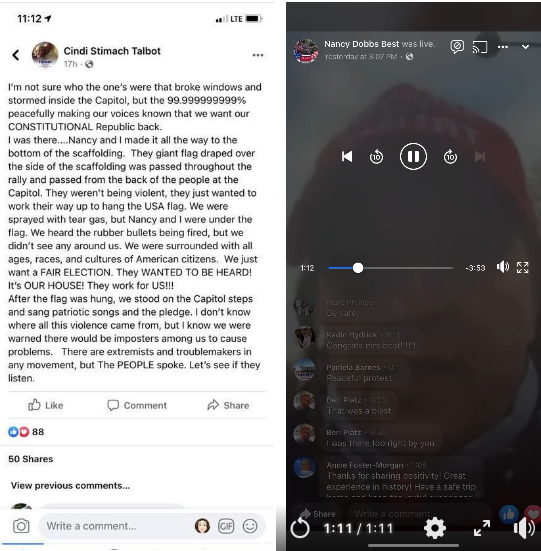 Two teachers from the Valley View School District in Jonesboro will not face any repercussions after one boasted on Facebook yesterday that they made it all the way to the scaffolding that has been erected for the Jan. 20 inauguration ceremony in front of the U.S. Capitol during Wednesday’s riot.

The post, by elementary physical education teacher Cindi Stimach Talbot, and accompanying video has since been taken down, but not before it was seen and screen shots circulated. She wrote:

I’m not sure who the one’s [sic] were that broke windows and stormed inside the Capitol, but the 99.999999999$% peacefully making our voices known that we want our CONSTITUTIONAL Republic back. I was there. Nancy (Dobbs Best, also a coach) and I made it all the way to the bottom of the scaffolding. The giant flag draped over the side of the scaffolding was passed throughout the rally and passed from the back of the people at the Capitol. They weren’t being violent, they just wanted to work their way up to hang the USA flag. We were sprayed with tear gas, but Nancy and I were under the flag.  … I don’t know where all this violence came from, but I know we were warned there would be imposters among us to cause problems. There are extremists and troublemakers in any movement, but The PEOPLE spoke. Let’s see if they listen.

The teachers were “peacefully making” their voices known by moving with an angry and unruly mob that had pushed though barricades and fencing meant to protect the Congress as it voted to accept the election of Joe Biden and Kamala Harris as our next president and vice president. Maybe they weren’t among the folks punching cops and wielding sticks, but it was those actions that allowed them to breach security and reach the west entrance of the building.

Valley View Superintendent Bryan Russell, reached by phone today, said no action would be taken against the teachers “unless legal charges are brought against them.” Instead, he said, the district is “making sure they remain masked and socially distanced because they were at a rally” where mostly unmasked people were squashed together. Russell said he gotten calls from those who objected to Talbot and Best’s participation and those who supported it. He then declined to answer any other questions and hung up.

Several supporters commented on Talbot’s Facebook page, including one who claimed the police moved the barricades and invited the mob in. Don’t know what that person was watching, but it wasn’t the melee I saw shown on TV and reported everywhere.

Who’s extreme here? Who were the troublemakers? I would feel pretty uncomfortable if my kid was being taught by someone so conned by Trump that she saw nothing wrong in joining violent vandals approaching the U.S. Capitol.