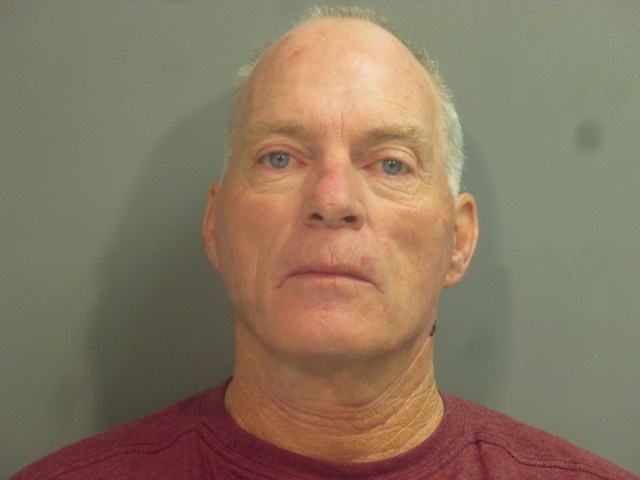 UPDATED: The Justice Department has announced the arrest of Richard “Bigo” Barnett of Gravette, who boasted of his invasion of House Speaker Nancy Pelosi’s office during the Wednesday Capitol riot and displayed a letter he’d taken from her office.

Richard Barnett, 60, of Gravette, Arkansas, was taken into custody in his home state on charges of entering and remaining on restricted grounds, violent entry and theft of public property. Further details were not immediately available.

40/29 reported that Barnett, 60, turned himself in to the Benton County sheriff’s office Friday morning. He was later jailed in Washington County.

The Justice Department issued a news release and a detailed statement of facts Friday afternoon:

Richard Barnett, 60, of Gravette, Arkansas was arrested today in Little Rock, Arkansas on multiple criminal charges related to his alleged unlawful activities earlier this week at the U.S. Capitol Building where he was photographed with his feet up on a desk in the Speaker of the House of Representatives’ office.

Barnett is in custody is expected to make his initial appearance today in federal court in Little Rock. He will ultimately be extradited to Washington, D.C.

“The shocking images of Mr. Barnett with his boots up on a desk in the Speaker of the House’s office on Wednesday was repulsive,” said Jeffrey A. Rosen, Acting Attorney General of the United States. “Those who are proven to have committed criminal acts during the storming of the Capitol will face justice.”

According to court documents, U.S. Capitol Police learned that an individual had entered the restricted office area of the Speaker of the House of Representatives Nancy Pelosi and was photographed with his feet propped up on furniture. Those photos were circulated on numerous news media platforms which identified the individual as Barnett. A search of law enforcement databases confirmed that the individual in the news photographs did in fact appear to be Barnett.

“This case is just one in a number that demonstrate the brazen acts that were committed at the Capitol on Wednesday,” said Michael Sherwin, Acting U.S. Attorney for the District of Columbia. “My Office is committed to prosecuting all individuals who participated in these abhorrent acts to the fullest extent of the law.”

“The U.S. Capitol is one of the most iconic buildings in our country and a symbol of the Constitution and people we have sworn to protect, and its destruction will not be tolerated,” said Steven M. D’Antuono, Assistant Director in Charge of the FBI Washington Field Office. “This arrest demonstrates to all individuals involved in January 6 incursion into the U.S. Capitol that the FBI will find you and hold you accountable for your crimes, no matter your location. We thank the FBI Little Rock Field Office for their quick assistance in bringing this perpetrator to justice.”

Barnett is charged with knowingly entering or remaining in any restricted building or grounds without lawful authority; violent entry and disorderly conduct on Capitol grounds; and theft of public money, property, or records. If convicted, he faces a maximum penalty of one year in prison. Actual sentences for federal crimes are typically less than the maximum penalties. A federal district court judge will determine any sentence after taking into account the U.S. Sentencing Guidelines and other statutory factors.

This case is being investigated by the U.S. Capitol Police and the FBI’s Washington Field Office, with the assistance of the Justice Department’s National Security Division and the FBI’s Little Rock Field Office.

Assistant U.S. Attorney Nicole McClain of the U.S. Attorney’s Office for the District of Columbia is prosecuting the case.

Here’s how you cann help. Believe me, “Bigo”, if you come back to my town, Gravette, AR the people of this town will call every law enforcement officer in the state and make sure you get justice for your disgusting criminal behavior. Let’s find every single one of these criminals https://t.co/Z1zndVyPbS

Sen. Jim Hendren is on the lookout for the vandal from Gravette. Much as I admire Hendren’s outspokenness on issues of the week, I think he may overstate community sentiment about lawbreakers such as Richard Barnett, who reveled in occupying Pelosi’s office and taking a piece of mail from her desk.

I think Donald Trump would be re-elected in Arkansas tomorrow, with precious fewer votes than he won pre-riot incitement and pre-Georgia election fraud.

A sample of what I mean is this screenshot from a Facebook page of a Springdale man (husband of a City Council member.) It and another combative post (he said he was joking) no longer appear on his page 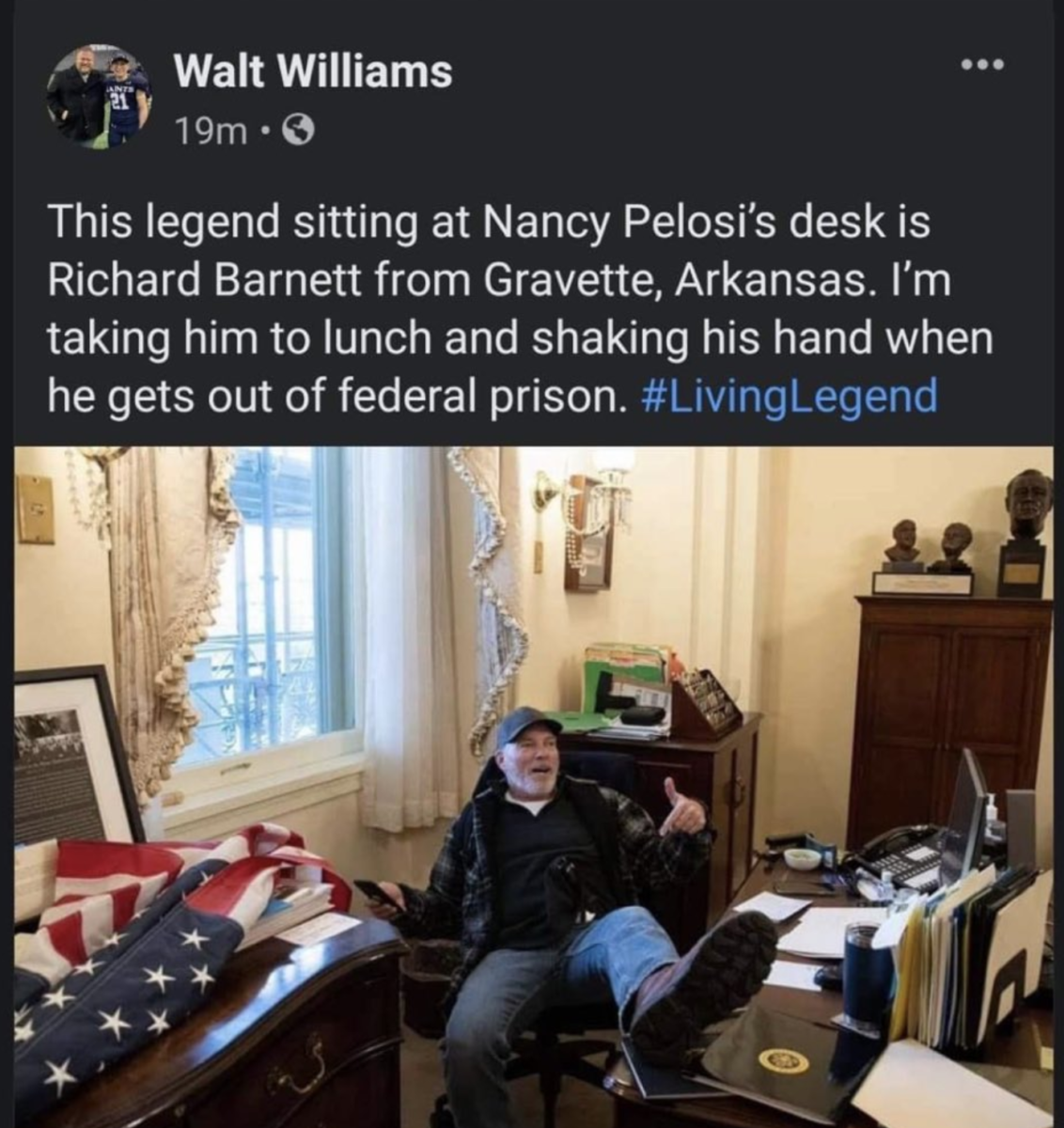 Where’s Bigo? Will he be arrested? Don’t know yet. But 40/29 reported that federal agents visited with Gravette police yesterday. Barnett actually lives outside the city limits, city officials have hastened to say, but he is known to police.

Hendren commented after the arrest was announced:

I’m not a lawyer, but we lost a police officer during this attempted coup, seems like he ought to own that too. https://t.co/DxCP3mryMX