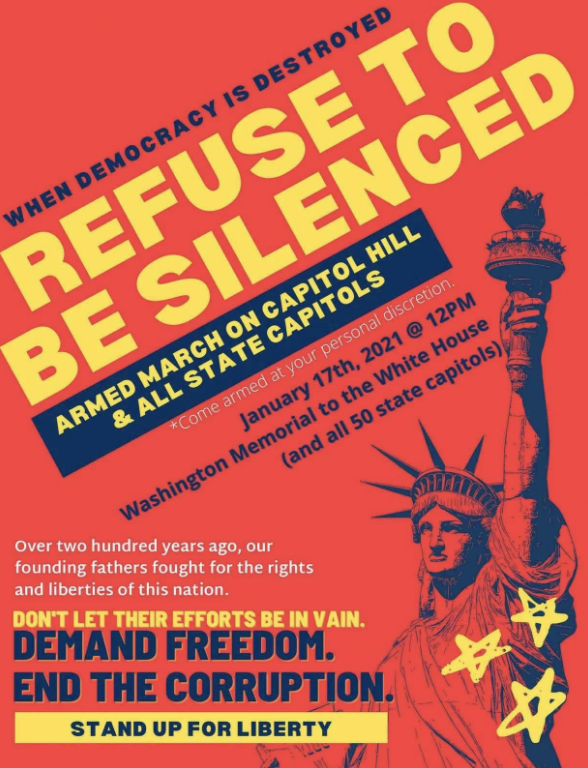 MORE MARCHING: This image is widely circulating on the web, along with addresses of state gathering sites, including the Arkansas capitol. Is it a cause for alarm? Events last Wednesday prove the danger of underestimating the risk of the people who support Donald Trump.

Correct me if I’m wrong but only one Arkansas Republican elected official in statewide or national office has declared himself or herself on a simple question about the continuing crisis of a Trump administration: Should he resign?

The one who has answered directly failed the test.

Attorney General Leslie Rutledge, Trump’s devoted defender, gave me a one-word answer through a spokesman to the question: “No.” Other questions for her: Where was she Wednesday? (Not in Washington, she says, but otherwise won’t say.) Why won’t she repudiate the Republican Attorneys General Association, which she chaired in 2017-18 and its political arm, the Rule of Law Defense Fund for sponsoring and encouraging participation in the march that led to Wednesday’s desecration of the Capitol? (She says she knew nothing about it, despite many footprints of her involvement with the organizations. This is not a repudiation.)

I asked Governor Asa Hutchinson’s communications director, Katie Beck, for a yes or no answer to the resignation question yesterday. She did not respond. He told reporters yesterday that he wants the administration to end (When? He didn’t say);  that he didn’t think Trump would resign, and that impeachment wasn’t practical. None of these sentiments amounts to a direct declaration that Trump SHOULD resign. This is the quickest course to prevent further debasement of the country by a sociopath. A delegation of Republicans successfully pressed Richard Nixon to do that in the Watergate scandal. Today’s Republicans apparently are too afraid of Trump and his mob to attempt the same, apparently.

Hutchinson’s temporizing deserves scorn given his history. He prosecuted and has long defended his role in attempting to remove Bill Clinton from office for lying about a sexual liaison. A similar denunciation is in order for Trump, who incited a mob he helped muster to trash the Capitol in a deadly rampage.

Among candidates for governor besides Rutledge: Announced candidate Lt. Gov. Tim Griffin said he supported ratification of the Electoral College vote, which counts for courage in today’s Trumplican Party, but he has not denounced Trump. Sarah Huckabee Sanders, formerly chief spokesliar for Trump, finally was prompted by a Democrat-Gazette inquiry to condemn violence at the Capitol but otherwise, she endorsed the president for his supposed (reluctant and empty) video announcement that he favored a peaceful exit. We know from reporting today that his lawyer, Rudy Giuliani, was calling a U.S. senator DURING the riot to get the Senate to slow down the votes on accepting the Electoral College outcome. We know from new reporting also that Trump regrets having made the video about a smooth transition because it angered his mob.

Profiles in courage among top-ranking Arkansas Republicans? In short, supply, save potential gubernatorial candidate Sen. Jim Hendren who made many denunciations of those who enabled the riot Wednesday and their deluded conspiracy theories about a fraudulent election.

Profiles in cowardice and dishonesty are easy to find. There’s U.S. Rep. Rick Crawford who opposed the Electoral College vote count along with almost 150 other congressional Republicans (whom Rutledge declined, through a spokesman, to fault). There’s U.S. Rep. Bruce Westerman. Westerman was leaning that direction on the Electoral College until Wednesday’s riot but he had already indelibly soiled himself by joining, along with Crawford, the spurious lawsuit that Rutledge helped wage to prevent the acceptance of certified Electoral College votes. Westerman announced his support yesterday for Griffin in the 2022 governor’s race, by the way.

A refusal to denounce Trump and dishonest assertions of election fraud continue to inflame those who rioted Wednesday. Efforts are afoot for militant marches on state and national Capitols next weekend.

Sanctimonious words about violence are not enough. Politicians must denounce the lies and the liars that fuel the mobs, lest they share responsibility for a repeat of Wednesday. Several in Arkansas already have Wednesday’s blood on their hands.

PS: The nuts have talked about mustering on both Jan. 17 and inauguration day. Has the governor put the National Guard on standby. Is Secretary of State John Thurston prepared? Or are these steps reserved only for people with black faces protesting police killings?