Last week, the Capitol Police had to put up with a wild mob wreaking havoc on the halls of Congress. Tonight, it’s Republican congressmen giving them grief. They’re angry that, like regular people, they are being required to pass through metal detectors to get to the House floor, a new procedure prompted by last week’s riot. Among the tantrum-throwers: Rep. Steve Womack, who, NPR, The Hill and others reported, told a Capitol Police officer to not touch him. The Hill writes that Womack yelled, “You are creating a problem you do not understand the ramifications of” at the police manning the detectors, shouting at them to “get back” and “don’t touch me.”

Manu Raju, the congressional correspondent for CNN, also tweeted that Womack loudly complained that he was “physically restrained.” 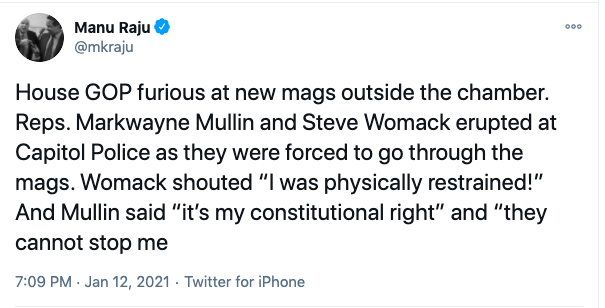 Colorado Republican Lauren Boebert, a QAnon supporter who has tweeted out her intention to take her Glock into the Capitol, refused to let police inspect her purse, which resulted in a standoff for sometime.

Feeling special, Trump cultist Rep. Debbie Lesko (R-Ariz.) tweeted: “For members of Congress to enter the floor of the U.S. House, we now have to go through intense security measures, on top of the security we already go through. These new provisions include searches and being wanded like criminals. We now live in Pelosi’s communist America!”

NPR and the Hill also reported that a group of Republican lawmakers simply forced their way through the metal detectors.

The House is meeting to consider a resolution calling on Vice President Pence to invoke the 25th Amendment to remove President Trump for inciting last week’s mob, sheep following his claims that the election was stolen from him, to raise hell in the halls of the Capitol. Pence has already said he will do not such thing.