The governor and Arkansas State Police continue to refuse to answer questions about two state troopers who were in Washington last week for the pro-Trump rally that led to a violent invasion of the Capitol.

As I reported yesterday, Corporal Karen Clark, 56, assigned to the highway patrol administration in Little Rock, and Trooper Alan Aiken, 31, assigned to highway patrol in Lowell, received leave for Jan. 6 and their social media posts (now deleted in both cases), indicate they were in Washington.

State Police have taken the official position that what they do in their spare time is their business and there’s no need to inquire because no allegations of improper actions have been made against the two.

Clark, in extensive Facebook posts, including video, defended the pro-Trump crowd and said it was peaceful. She believes Antifa or similar agents were responsible for the violence. She said she behaved peacefully and didn’t enter the Capitol building, though she acknowledged in a video that she may have entered a restricted area outside the Capitol along with many in the crowd. Aiken’s Twitter posts left the appearance in one case that he might have been inside the Capitol, but his comment about camera placement in the Senate could have been a conclusion from media coverage. He, too, believes Antifa caused the riot.

The Associated Press reported today that it has found at least 21 former members of the military or police organizations were in or around the Capitol last week and more are under investigation. People in the crowd used tactics familiar to police and the military. Agencies have taken note.

Meanwhile, police departments in such major cities as New York, Los Angeles, Las Vegas, Houston and Philadelphia announced they were investigating whether members of their agencies participated in the Capitol riot. The Philadelphia area’s transit authority is also investigating whether seven of its police officers who attended Trump’s rally in Washington broke any laws.

Seems a fair question, but as far as we know, not in Arkansas.

The beginning of the AP article is also interesting in light of what Corporal Clark said on Facebook. AP wrote:

As President Donald Trump’s supporters massed outside the Capitol last week and sang the national anthem, a line of men wearing olive-drab helmets and body armor trudged purposefully up the marble stairs in a single-file line, each man holding the jacket collar of the one ahead.

The formation, known as “Ranger File,” is standard operating procedure for a combat team that is “stacking up” to breach a building — instantly recognizable to any U.S. soldier or Marine who served in Iraq and Afghanistan. It was a chilling sign that many at the vanguard of the mob that stormed the seat of American democracy either had military training or were trained by those who did.

We saw a group of police officers march in bright green safety uniforms from the left sidewalk and into the front of the capitol. My cell phone battery went from 27 percent to zero immediately.  Others around us commented that thier cell batteries had died very quickly as well.   Very strange.  Then  a group of Trump supporting  ‘posers’  approached us from the rear as they pushed and shoved in formation past us in a line of 20 plus young, clean cut guys and gals, dressed in mostly black, wearing black and dark colored backpacks, ear buds in thier left ears, mics under thier throat area and walking with thier left hands on the left shoulder of the person ahead of them.  They were very quietly chanting or talking but we could not understand what they were saying.   I told my sister, Felecia, ” this ain’t right. Those folks ain’t with us.  Shit about to get real.”

Perhaps Clark’s videos could shed some light on these events and maybe even this line of marchers. Wouldn’t the State Police want its officers to help the investigation?

UPDATE: This question seems even more pressing now that this video has been uncovered if Trooper Clark has video.

NEW FOOTAGE: a long, disciplined line of men in body armor moves as a unit up the #CapitolBuilding steps.

We need to identify this group.

Aiken has expressed avidly pro-Trump views on his Twitter account (legal, of course, as is going to a rally). He was upset with Republicans who agreed to accept the electoral votes. Samples: 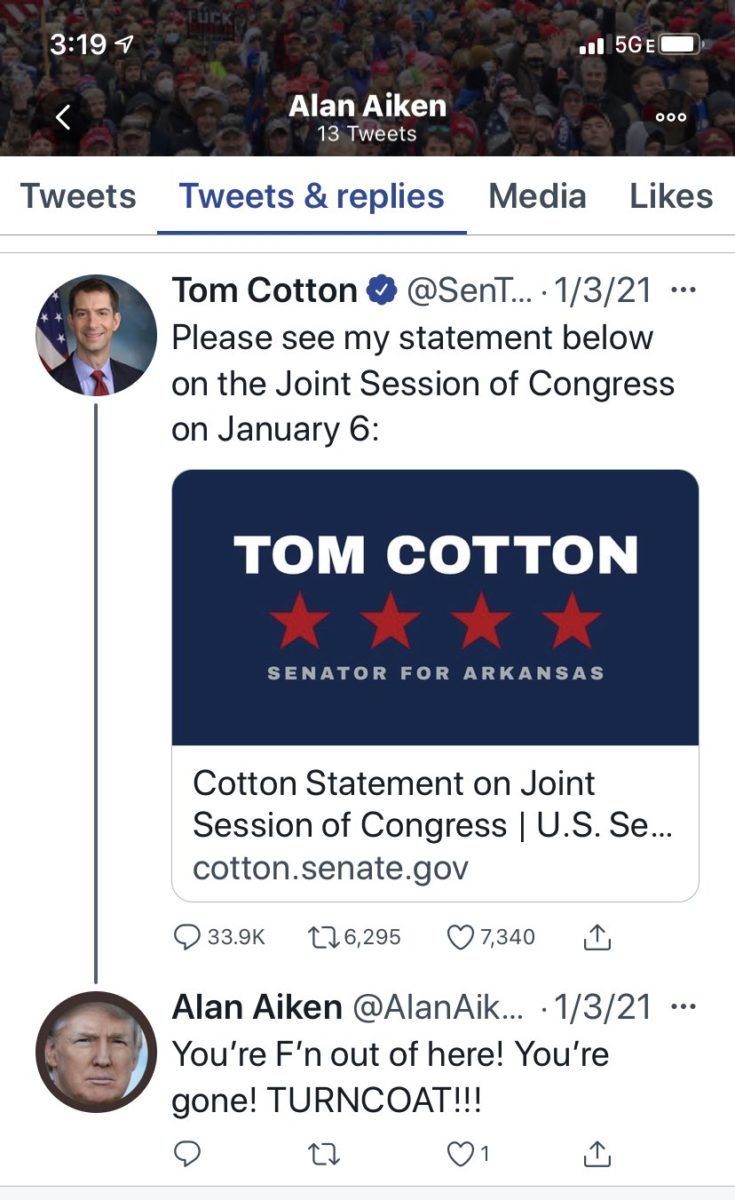 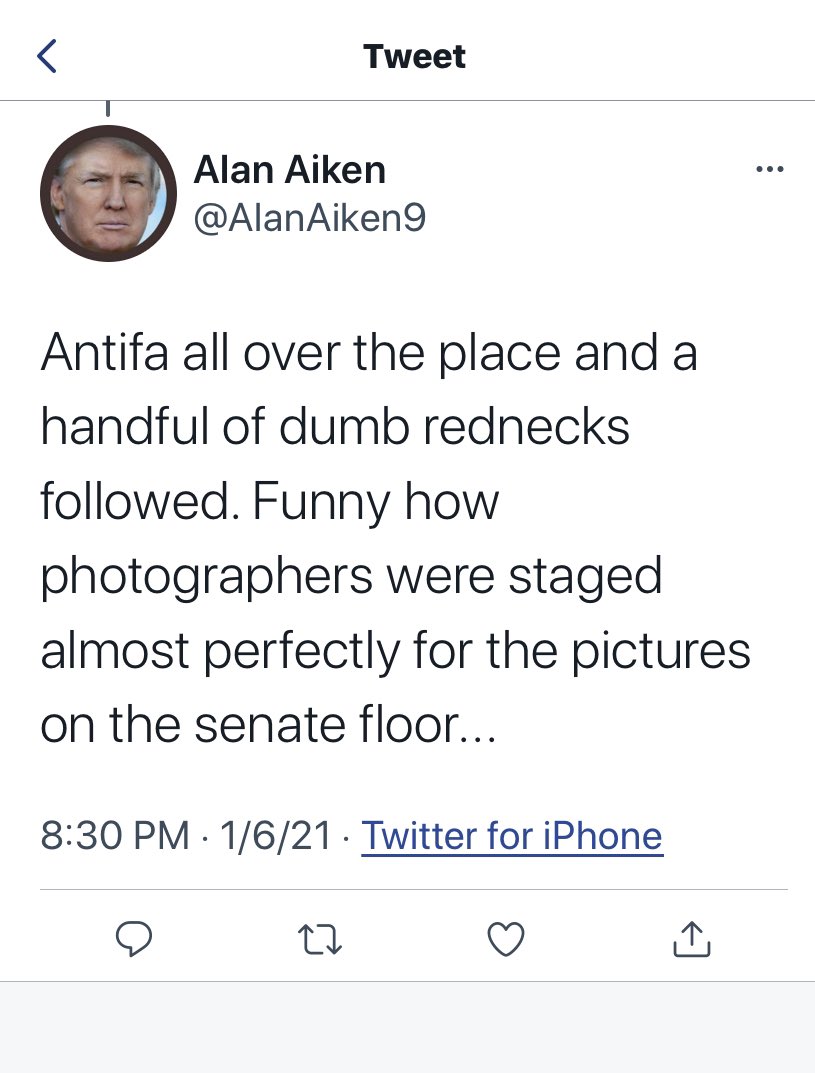 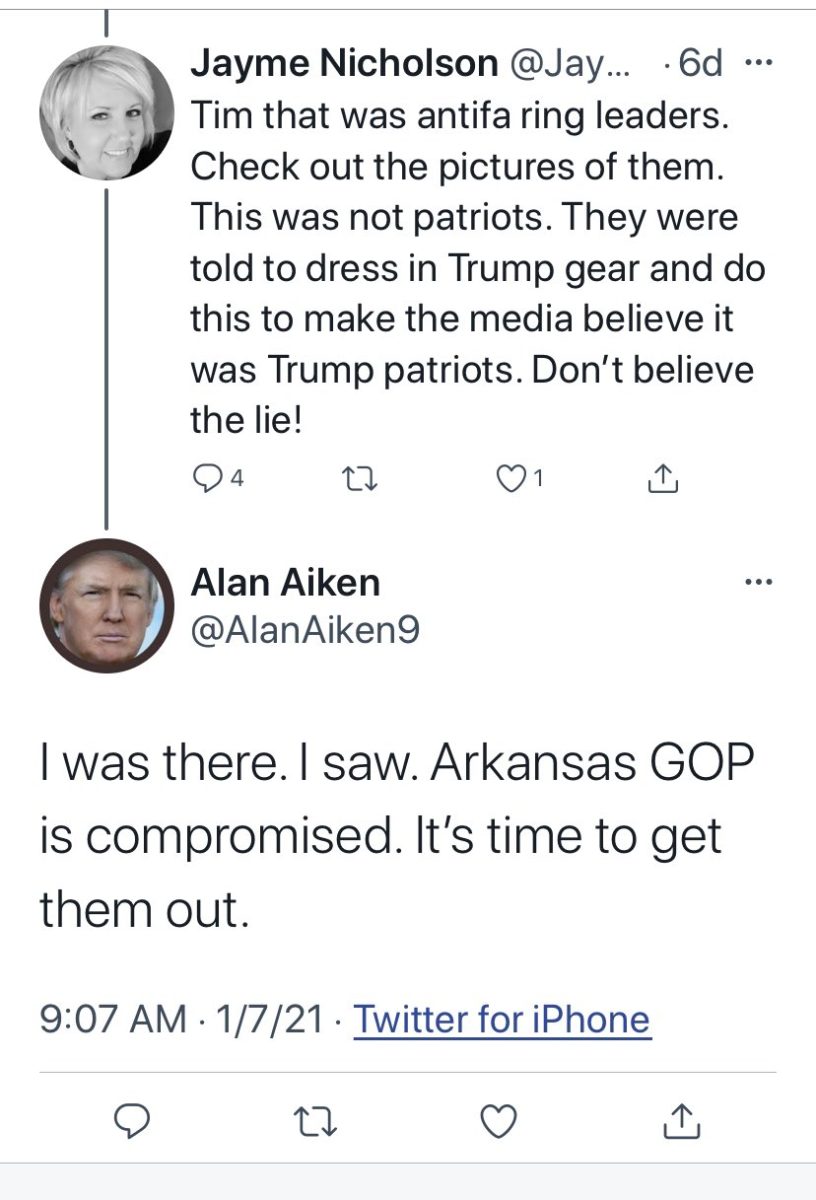 Into the breach steps Blogger Russ Racop, who rounded up a variety of State Police records on the troopers, saved her video (highly recommended) and also provides details, including dashcam footage, of a 2017 disciplinary incident involving Aiken. He got involved in a chase and, mistaking a fellow trooper as a suspect, hit him with his vehicle. The lieutenant he hit filed a complaint saying Aiken was a liability to the agency and danger to the public. In an agreed action, Aiken lost two days’ pay and was not allowed to be promoted for a year. 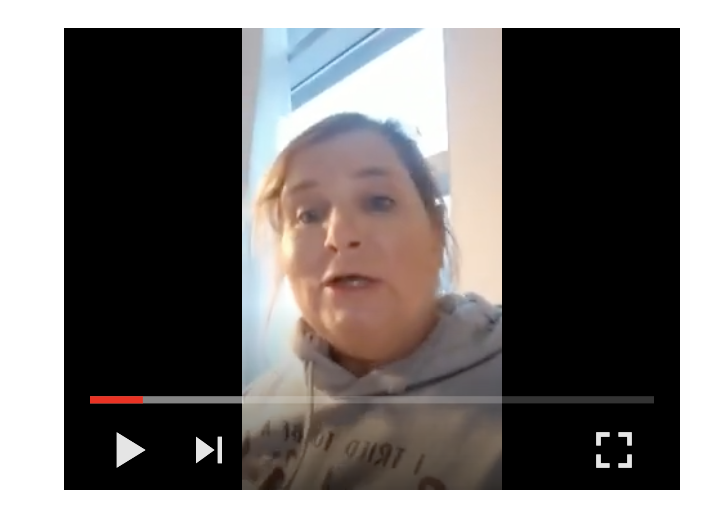 Racop’s extensive post on his Bad Government in Arkansas blog is here. It includes the Clark video.

Also: Former State Police Director Tom Mars, who’s been calling for an accounting of the troopers’ activities in Washington, commented on Twitter about the Yahoo News story that details Clark’s Antifa theory and her activities at the Capitol.

The ASP has mistakenly asserted that the two troopers were attending the “pre-riot rally” in D.C. The “Save America” rally was held at the Ellipse. The mob walked from there to the Capitol, and the troopers have both admitted on social media to being there. pic.twitter.com/XGOmyc5xav

And if they were there, they saw things. See this New Yorker account by a reporter at the Trump speech and his account of the march to the Capitol. 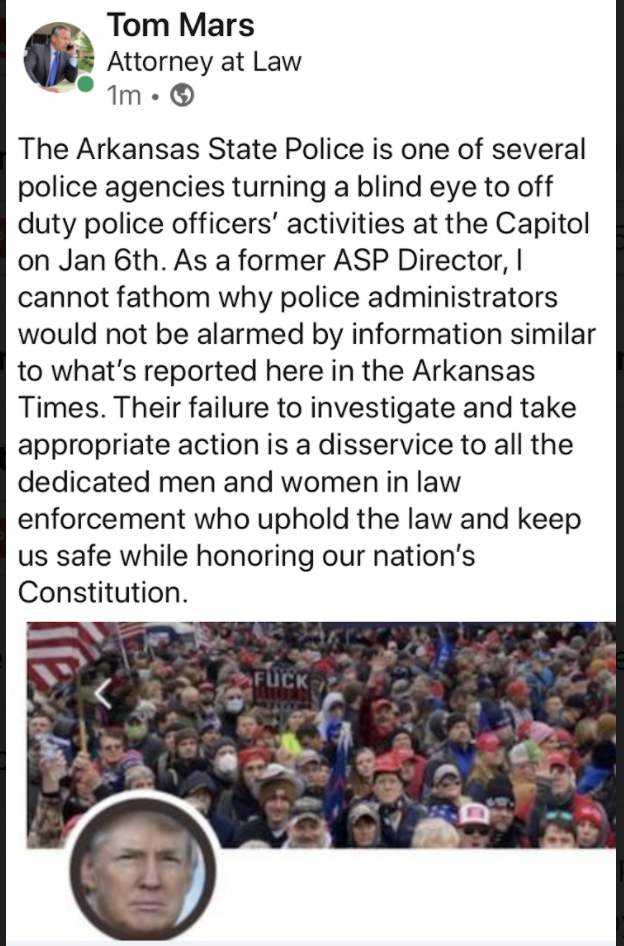